Movies You Wish You Could Forget... PERIOD...

jimzcatz said:
Are you kidding me? Into Darkness was the best of the entire Trek Franchise!!!!!
Click to expand...

On topic, I was watching some Beavis and Butthead DVD's from the 2011 revival season, and they showed scenes from Human Centipede while the two titular characters mocked it, that I can't get out of my head now. I had been deliberately avoiding that movie for so long since it came out while I was in college, prime time for me to fall victim to that "I dare you to watch this" niche it fills.

smstachwick said:
That was the one with Benny Cucumber as Khan, right?
Click to expand...

Yup - The Man With The Magic Blood, now the Federation has immortality! The scene where he says his name is one of the worst examples of dumbed down fan service ever - there’s absolutely no significance to his name for the characters in the movie - Sherlock Cucumber’s line delivery is laughable. STID was a real stinker - it makes the also lousy Star Trek Beyond (See the Enterprise destroyed AGAIN! Kirk on a dirt bike! Transmogrified (Liz)Idris Elba’s amazing plan - only 100 years to fruition via Kirk getting the Magical Whosis from the mini-monsters! Beastie Boys uber alles!) look good in comparison, at least STB had some fun action set pieces.

Again, none of these shallow, frenetic, overly loud, overly long, juvenile pseudo-Trek flicks occupy much space in my brain - TOS still exists (I rather like the enhanced versions though the originals definitely have a “back in the day” appeal), The Wrath of Khan is simply a good movie on top of being the best Star Trek flick, Voyage Home is still a fun, silly romp, Undiscovered Country is still the second best Trek movie ever, First Contact is a great, cathartic roller coaster, the best episodes of Next Generation are still fun to watch (though there are some really, really bad TNG episodes - Angel One, Sub Rosa, Shades of Gray…), almost all of DS9 is worthwhile, there’s even a few solid episodes from Enterprise (no compelling reason to ever, ever watch anything from Voyager again - ever!).

The less said about what Kurtzman and Co. are churning out now for Paramount+ the better - Lower Decks is not really very good but at least it’s funny and lighthearted, I had hopes for Strange New Worlds (Anson Mount does have the most amazing hair - it’s almost Farrah Fawcett like in that it’s nearly a character in it’s own right!) but I have to make an effort to get through the episodes so that’s just not cutting it, the other two Trek-like supposed pieces of weekly entertainment are best just left to whomever the creators feel they appeal to, which ain’t me, bless their hearts.

Ok, I feel I must say it: I wish I had never seen ANY of the JJ Abrams Star Drek abominations. In fact I'm all for creating a temporal incursion to remove them from our spacetime continuum entirely.

Marc_G said:
Ok, I feel I must say it: I wish I had never seen ANY of the JJ Abrams Star Drek abominations. In fact I'm all for creating a temporal incursion to remove them from our spacetime continuum entirely.
Click to expand...

Both struck a mortal wound to the value of thier "Golden Goose" franchises.
Click to expand...

For me, Star Trek Into Darkness was part of an entirely different franchise than real Star Trek, and that other franchise didn't need any more mortal wounding that it started out with.

smstachwick said:
I will point out that the episodic follow-up grossed over 1 billion...
Click to expand...

I have no very strong opinion about TLJ, but I will point out that profitability does not equal quality except in the eyes of the studio bean counters.

My friends and I call it Start Trek The Motion Sickness.

Antares JS said:
All numbers rounded to the nearest million:

Again, profitability does not equal quality. OK, one more thing; I'd argue that as far as story goes, Rise of Skywalker is worse then The Last Jedi. Palpatine lived? What is this BS?! Darth Pansy is Anakin's grandson, so Rey has to be Palpatine's granddaughter; "I say you made me, so then you've got to say I made you." Luke's dying fake-out was awesome by comparison.

ThirstyBarbarian said:
The Book of Boba Fett was definitely bloated — almost as bloated as Boba himself appeared in that armor.

To me, the story just didn’t make much sense. He becomes a crime lord and takes over a criminal organization in order to no longer do crime? Not sure how that works. Anyway, I still found the series entertaining, even if it didn’t hang together very well.

I enjoyed Kenobi, although it has issues too. I really liked Andor, although I suspect not everyone did — that show had the feel of being “Star Wars for adults”, and probably little appeal to kids. And I love the Mandalorian — that one has something for everyone, I think.

Overall, I am really enjoying the Disney+ series. I’m looking forward to the return of Mando and the new Ashoka show, which I think is coming in 2023.
Click to expand...

Similar to @neil_w, I spent the entire BoBF waiting for it to get good, but it never did. After the first three (I think) episodes of Kenobi I got the distinct feeling that I was in for the same experience, so i stopped. Which is a real shame because (for me) Obi Wan is a better character for a miniseries than Boba Fet in the first place; I never understood why people were into Boba Fet to start with (I'd rather have Boba BJT or Boba Tea ) so his failing to be interesting later was not a big deal, but Obi Wan failing to be interesting really made me sad.

Marc_G said:
Ok, I feel I must say it: I wish I had never seen ANY of the JJ Abrams Star Drek abominations. In fact I'm all for creating a temporal incursion to remove them from our spacetime continuum entirely.
Click to expand...

I'd hit "Like" many time over and over if I could.

techrat said:
Any "The Matrix" sequel
Click to expand...

I've never seen any of those. Why would I bother when the first one made absolutely no sense at all? "This is you" says Laurence Fishburne, holding up a battery. The computers get power from the heat that people make; well just burn the carbohydrates you're feeding them in a steam generator, ferchrisakes! The computers are afraid that humans will figure out that their world is controlled by computers; well, since you control the world, don't let them learn about computers, keep them in the dark ages when people believed that the world was controlled by gods. "You have to watch the next ones, then it'll make sense", my friends tell me. But, I repeat, why would I bother watching the next one when the first one stinks?!!
Last edited: Nov 28, 2022

The Lobster (Colin Farrell, Rachel Weisz). One of those movies that you keep watching because it HAS to get better. It literally has to. Nope, it doesn't.
M

Leaving the theater following a Beavis and Butthead movie a person ahead of us said "That was stupid.”
What we’re they expecting??

I used to go to the movies all the time with my friend Jim. We would pick the movie with the worst ratings. On two consecutive Fridays we saw Lost Highway and Crash, not the Sandra Bullock one
Last edited: Nov 28, 2022

I have to agree with Gary Larson on this one… 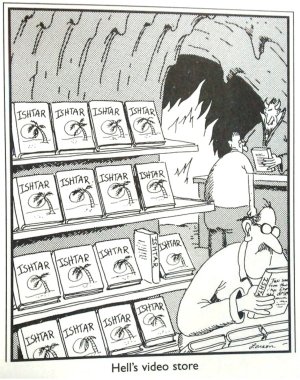 In that same vein, I don’t really think I needed to see Citizen Kane. It may have been the greatest ever in 1941, but I feel like it’s one of those movies where you have to see the top 5 prior to it to understand what it brought to the table, which I have no inclination to do. So basically to me it’s one of those movies that isn’t terrible, but everything innovative about it has been done better by more entertaining films that I’d prefer to watch instead.
P

Hitch Hikers Guide to the Galaxy
Horrible rendition of the books. Tried to cram too much into the period of one movie, so a lot of the subtle humour and background was completely bulldozed over. So much great material to work with and butchered it big time.

just didn't get it..

MClark said:
The Cook, the Thief, His Wife & Her Lover
The only movie I ever walked out on, girlfriend was walking so I must follow.
I don’t think she liked it, puked in the parking lot!
Click to expand...

I did watch it all but was "disturbed" when I left. HOWEVER great musical score
William

Yeah, that one was too deep(?) for me.
But I muddled through. I can’t really think of a movie that I hated that bad. It still beats being at work…

Easier to understand by reading the book. The planet is alive, tries to merge with nearby conscious beings. In the end they are absorbed in to the super being...

After that I quit going to the movies.

I remember seeing 2001 at the drive in with my mom and dad and my 2 brothers and my sister. I was the only one awake at the end.

Wavelength (1983). It's craptacular. I purged it from my memory until I stumbled across it on YouTube a couple of weeks ago.

Toxic Avenger--Made into a cartoon series.

Moontrap--Stars Bruce Campbell and Walter Koenig, plus a couple topless chicks. The moon buggy in this film was displayed at the former MI Space Center.

After that I quit going to the movies.
Click to expand...

I must be weird, I like all of those.

I have a couple more that shouldn't be watched


Those are just stupid movies.
These are downright disturbing:

Men Behind The Sun

RocketT.Coyote said:
Moontrap--Stars Bruce Campbell and Walter Koenig, plus a couple topless chicks. The moon buggy in this film was displayed at the former MI Space Center.
Click to expand...

I might have to seek that out. The very notion of Ashe meets Checkov or Brisco County Jr. meets Bester is irresistable.
Last edited: Dec 3, 2022

Journey To The Far Side of The Sun.

RocketT.Coyote said:
Journey To The Far Side of The Sun.
Click to expand...

WHAT? Doppelganger is a great film. What's not to love about it?

Cape Byron said:
WHAT? Doppelganger is a great film. What's not to love about it?
Click to expand...

The rescue guy with the kazoo/pan flute for starters.

Why Alien Life Will Be Robotic