Someone asked me recently to provide more detail for the mid-power pad that I recently built, and was first used at URRF3. The idea here was not simply to place standard rails in a location for F & G motors (which the club was already doing), but rather to have pads that made use of smaller rails for mini and micro buttons. The design becomes a sort of hybrid of elements from our clubs 1010 pads and from our low power pad, mixed into a new format that is easy to use. Or something like that. These are the pads in question: 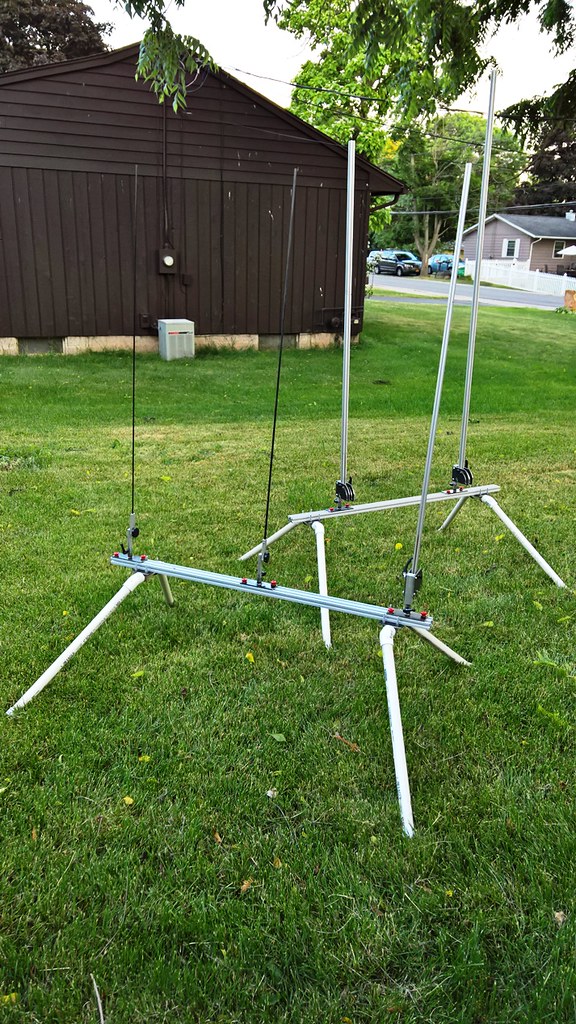 Early on, I decided to use a rail as the backbone of a pad/rack system, with a rack able to accommodate 2 or 3 pads in an adjustable way. Or, to allow it to be tailored to the launch needs when set up. To that end, I wound up using an 80/20 rail - double 1010 (basically two 1010 rails siamesed together) to have something wide enough and stiff enough to support the pad bases. It also has the flexibility of being expandable, more than one rail could be joined end to end to a larger bank if there was desire to do so. And, there are a lot of off-the-shelf hardware bits that fit the rails that make working with the easier. Legs are made from 1" PVC, using 45 degree elbows. They are U-bolted to a mounting plate, which is in turn attached (and easily removed) to the underside using t-slot hardware.

I used 4' segments of rail as a basis for the rack, allowing 3 pads to placed with 1.5' spacing, or 4 with 1' spacing, depending on size of rockets to be flown. The pads themselves use a base made from 3/16" steel plate with a standoff collar welded to them. They attach to the rail with t-slot fasteners and thumb wheels, making it easy to loosen, slide, and reposition the individual pads. The basic layout: 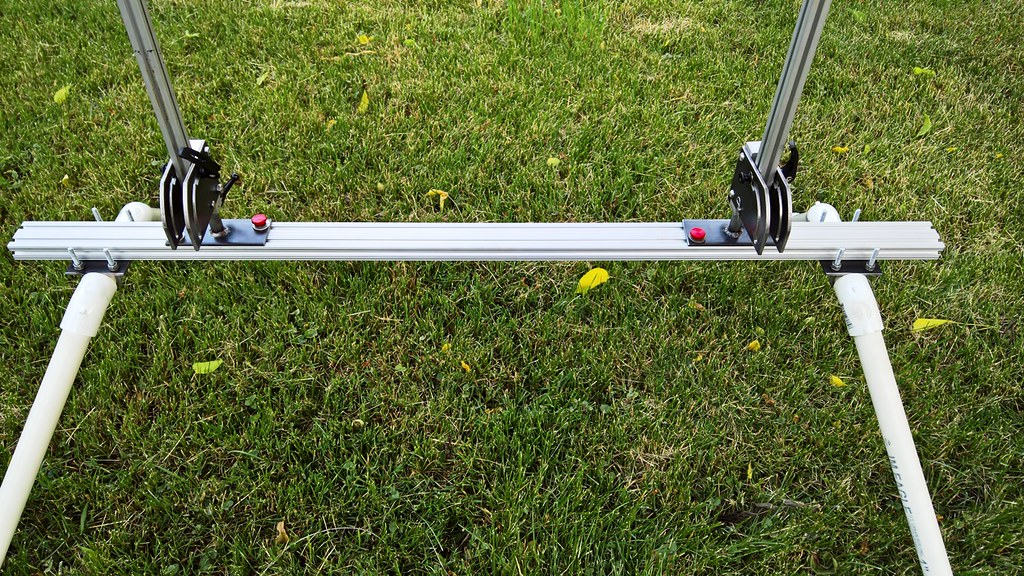 The pad bases support a choice of rail guides. Of course, I wanted to accommodate the small rails, but also have provision for 1/4" and another 3/16" rod. We occasionally have need for one of these sizes for a rocket that we might not be comfortable flying from the low power bank, so having those available at a pad a little farther away is handy. The rail mounts (shown above) are sort of a modified downscale of the larger pads that we already have in use. The rail is mounted on a pivot, with guide plates that provide angle adjustment. The plates allow for +20, -5 degrees of adjustment from vertical, and are mounted on an aluminum block, which in turn has a 3/8" steel shaft pressed into the bottom of it. The shaft slides into the collar on the base, and with a ratcheting handle set screw, allows a full 360 degrees of rotation. The angle change is made (and retained) using a quick-release clamp pin, originally for a bike seat post. When released, drop the rail to the 20 degree position, lift the clamp pin, and the rail will drop flat for loading. The downside is that the angle has to be set every time, but that's minor IMHO. Detail of the rail mounts: 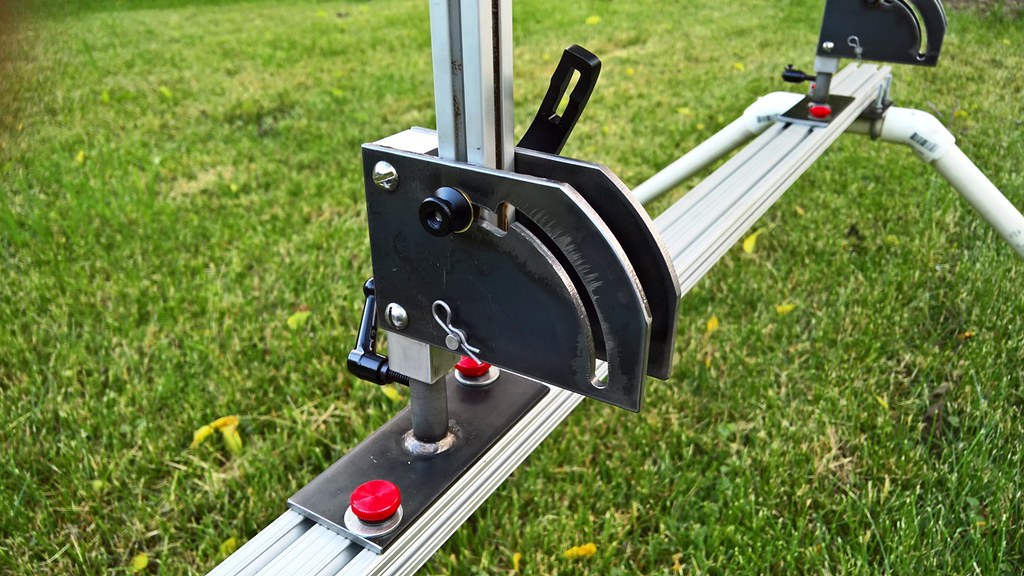 You can see that angle change clamp, the rotation pivot handle on the back, and the thumb screws for sliding the base. You can also see that the rail itself is mounted on a pivot with a hair-pin clip, so the rails themselves can be removed readily. The rails themselves need some machining to do this; they have a 1/4" slot for the clamp pin to pass through and have up/down travel, and a 3/8" diameter bore for the pivot. The latter is to accommodate a bronze bushing that's pressed into the rail to allow for better engagement with the pivot pin than a hole through the rail itself would've had. I made up mounts for two 20mm mini button rails, and one 15mm micro button rail. I may yet add a 10mm rail, but am so far not pleased enough with that rail's functionality to use it.

The rod mounts are somewhat similar, but simpler. There's no fancy slotted plates, I just installed them into aluminum blocks with set screws, and provided for angle adjustment with a thumb screw joining the upper & lower portions: 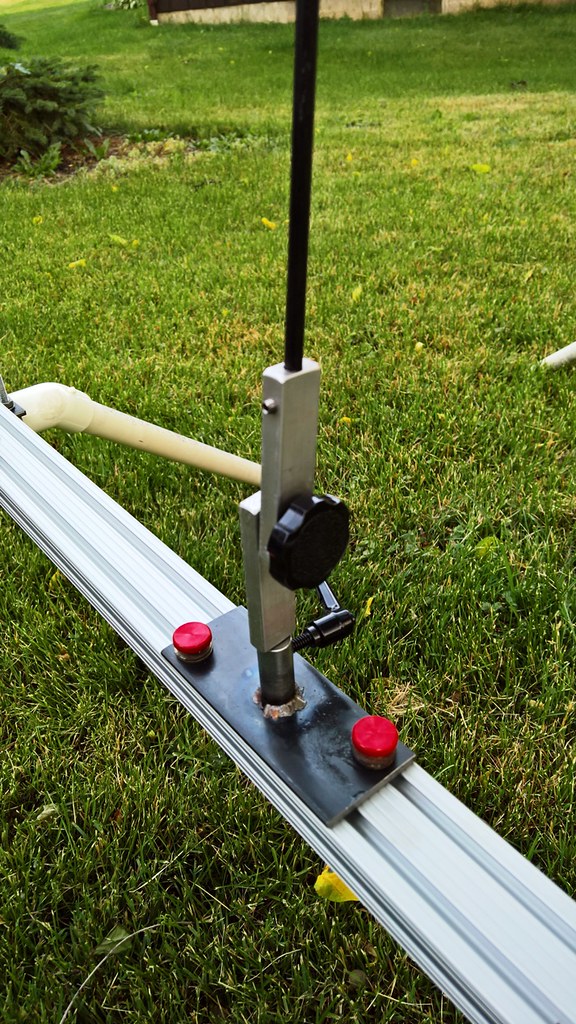 Simple, but effective. Placing a lock washer between the plate pieces as well as under the knob handle seems to hold the angle setting pretty well. Blast deflector plates were made at the very last minute, but are also pretty simple. I cut out rectangles from some 20 gauge steel I had, bent a flange, drilled a hole, and used a rail t-slot nut to hold them on. Similarly, an adjustable stand off was made using a bolt into a t-slot nut. OTOH, the blast plates for the rods just have a hole in the center and are dropped over the rod Estes-style. 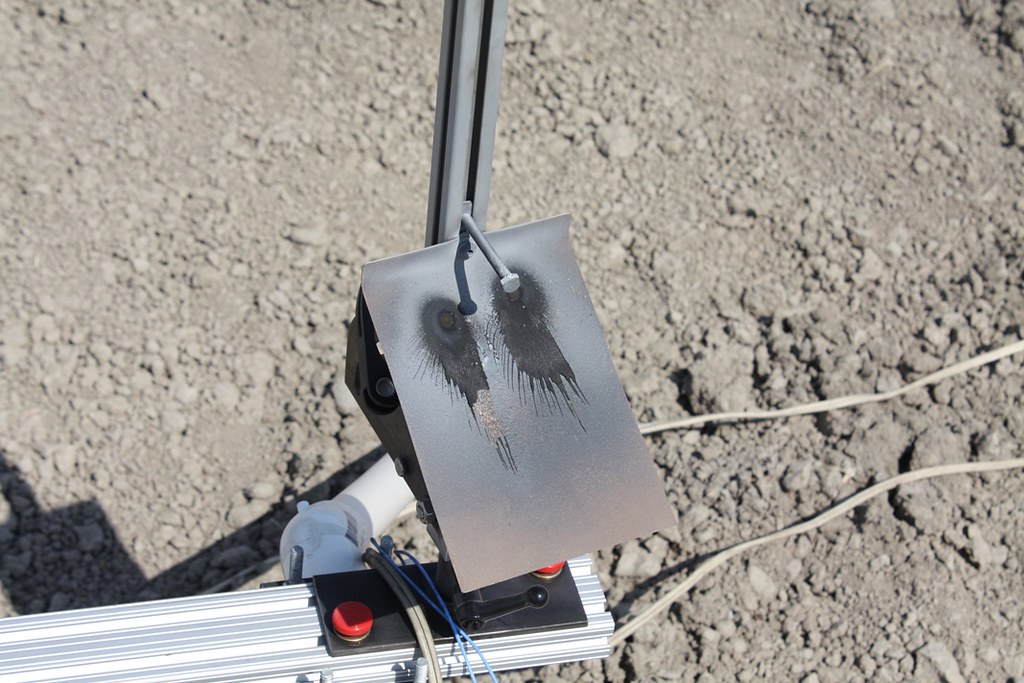 The whole thing took a little longer to come together that anticipated, but it seemed to work quite well. As you can see from the photos, the rack itself is only about 15" above ground level, so its easy to reach even by smaller rocketry enthusiasts, and perhaps primes them for using the larger pads later on. More pictures: 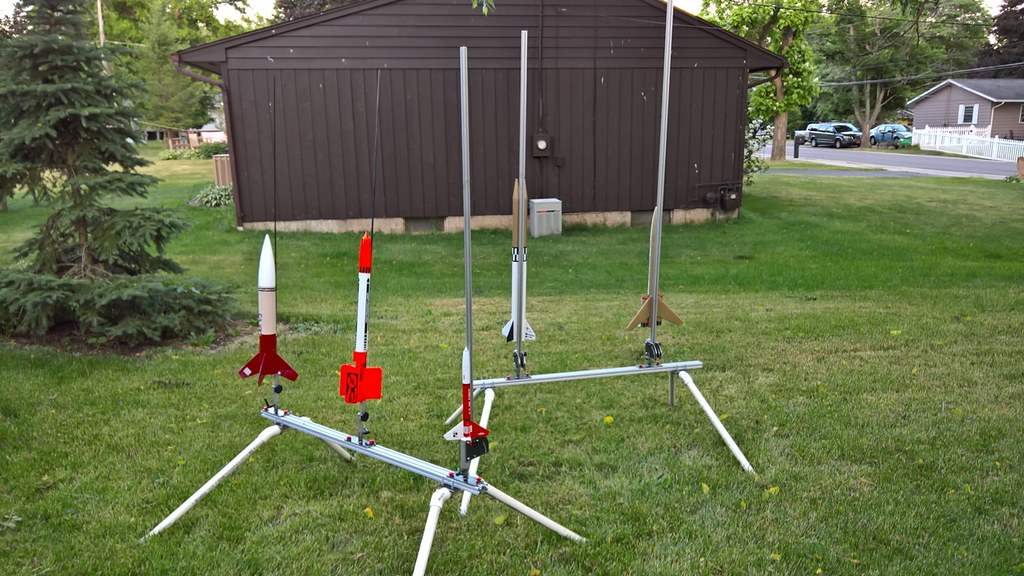 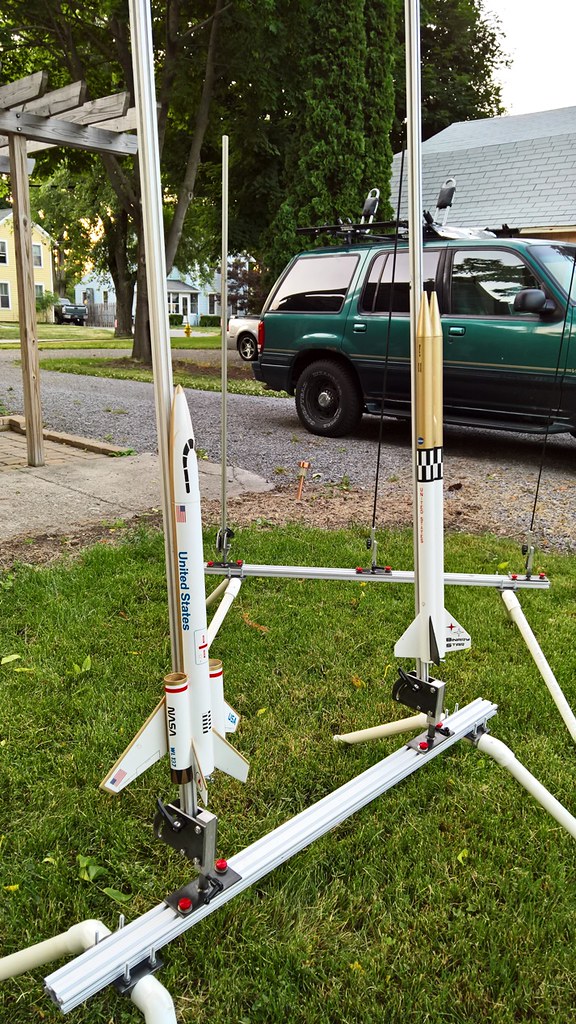 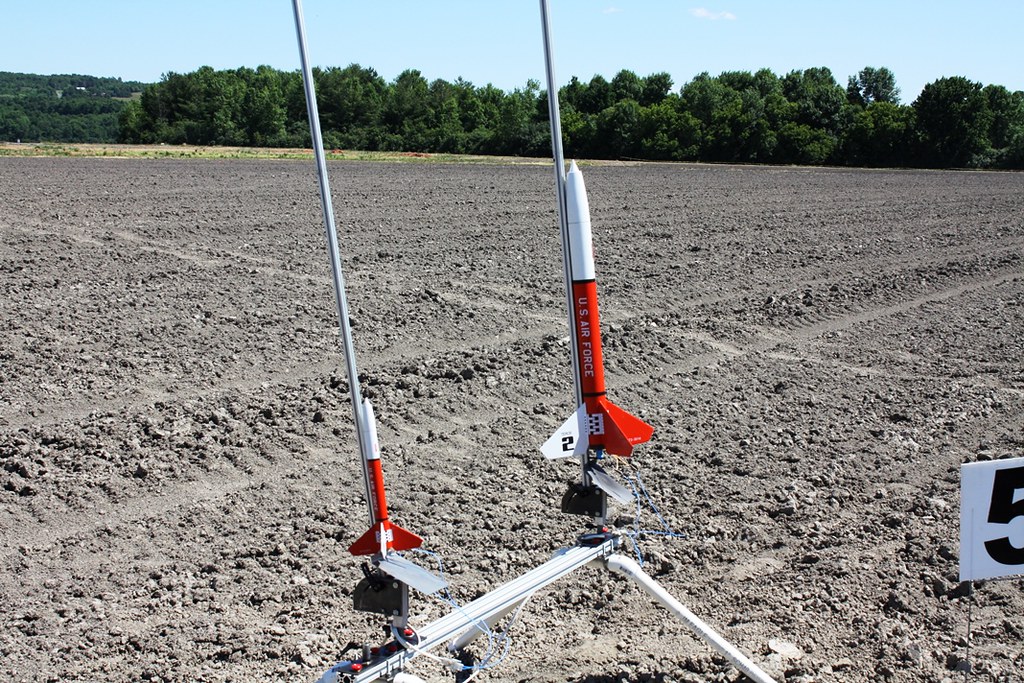 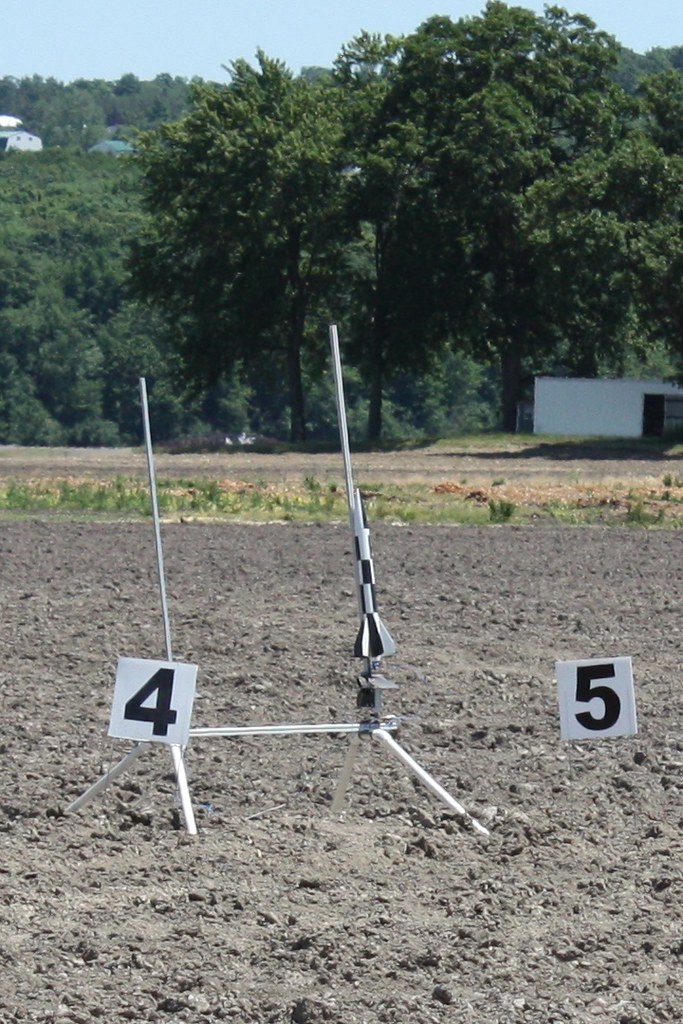 EDIT - One more thing, credit where its due. Although I came up with the layout and did low-skill-level drilling/machining/assy, this project wouldn't have happened without my friends Jason (who machined the angle plates, base plates and did the welding) and Sean (who milled the rails). Thanks to their help, I was able to pull this together just before URRF3.
Last edited: Jul 5, 2016

I just piggy-back my Makerbeam that I got from you in a piece of 1010 to keep it straight and make it versatile.
And a 1/8" Launch Rod fits in the Makerbeam.

Rick did a great job on those pads. I got to see them for the first time at URRF 3.They are a work of art as far as I am concerned. They are super smooth to use and adjust. I like the fact that they work similar to the weasel pads so its a natural transition from lets say the micro weasel to the weasel and then the mega weasel pads. I cant wait to fly off those at monthly launches and it looks like a lot more people are becoming interested in flying off smaller rails. I picked up some micromaxxs from ed at URRF 3 cant wait to fly them motors coming.

Thanks for the kind words, Larry. And Dave, and Chuck. I looked at this as sort of a design experiment. It was fortunate that it worked well enough (as designed), because I really didn't have any time to test it before URRF3. But I expect that we'll still have some debugging going forward. For one thing, I'd like to make the legs more readily removable. Right now, it requires an Allen key. But I'll be happy if we get other members to start adopting the smaller buttons, since the rails are available now on dedicated pads.

I think that some sort of pad for MicroMaxx rockets is the only thing we're missing at this point. I picked up a Quest MM starter set a while back as well (Space Shuttle & Saturn V), mostly because I wanted the tiny scale models. But maybe I'll actually try to launch them...
Last edited: Jul 7, 2016