I typically have more than 1 build going at a time. I decided to work on this while finishing my K&S Satellite Interceptor.

So, if you will, imagine a picture that contains triangular wooden thingies, round tubular cardboard parts, a round, pointy wachamacallit, and a bunch of other widgets. If you are really good, you can even imagine these on a tropical beach with surf and palm trees.... :wink:

For those not familiar, the rocket is supposed to look something like this...

First step is to attach the stabilizers to the wing. This is the older model where there are 2 separate stabilizers that glue to the wing, not the newer version with a single piece stabilizer and slots. The directions call to mark the wing at 3.5". But I found the stab would overhang the wing. I had to move them in to about 3.25" to properly fit. I used some right angle guides to support while the glue was drying.

After the one side was dry, I flipped it over and did the other. I had to position it so it hung over the table edge to clear the first stab.

It no longer shows up on their website, but several distributors still show them in stock - may want to get one quick...
L

Masked the wings/stab for fillets

And while the fillets were drying, I worked the motor tube.

The kit has you epoxy a strap to the body tube in front of the motor tube to secure the shock cord. I decided to use a Kevlar cord around the motor mount.
I also "plagiarized" an approach from New Way and protected the cord with some heat shrink.

les said:
It no longer shows up on their website, but several distributors still show them in stock - may want to get one quick...
Click to expand...

Good point..... Looks like I will be placing an order with somebody when I get off work in the morning.....
L

And..... I overdid it a bit with the bondo for the nose cone

But a bit of sanding later...

Love this kit. Flies best for me on an F52T. Flew it a few times on Aerotech G's, and it does fine, but it's a better flight on an F. Kind of soars to apogee in this smooth arc--unique.
L

And some wing fillets

Nice long lug gets glued to the bottom. I moved it up a smidgen from the bottom.

BUT - you cover the lug with a scoop. There is a section of body tube you cut in half lengthwise. I decided to cut a curve on the top to add more "texture"

When I went to install, the scoop I found it was too short to fit over the lug to the tube. Instead of half it needed to be about 60%.
I sanded the lug a bit to make it thinner, and used a dowel to try to curve the scoop more. I then started gluing and had to hold the scoop down while the glue set.

It then took some hefty fillets and a bit of F&F to fill some gaps where I wasn't holding it tight enough. Unfortunately I forgot to take a picture.

But I did get it primed

And then a coat of black

les said:
When I went to install, the scoop I found it was too short to fit over the lug to the tube. Instead of half it needed to be about 60%.
I sanded the lug a bit to make it thinner, and used a dowel to try to curve the scoop more. I then started gluing and had to hold the scoop down while the glue set.

It then took some hefty fillets and a bit of F&F to fill some gaps where I wasn't holding it tight enough. Unfortunately I forgot to take a picture.
Click to expand...

Thanx Les! This information will undoubtedly prevent me from throwing something across the room when I build mine. I like the idea of adding "texture" to the scoop too. I may have to do something similar, Kraken like maybe....
L

and after 2 days some silver

And then a light mist of transparent blue. One thing neat - looking directly it mostly appears silver. From the side it looks light blue. You can see the effect a bit by looking at different parts of the picture 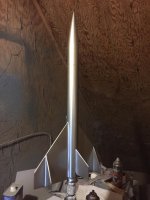 Started to decal. These are the decals from LOC

I have found I needed to trim some to fit. Not sure if due to my older version or not

Good enough for you is all anyone should ask for. Not one of my models is perfect, but they look good on the pad....
Those decals do look good with your paint!
B

Very nice work.
I look at rockets like this and think.......just beyond me! I will stick to bare wood helis and other weirdness.
L

I will admit I'm a bit disappointed with them. I've seen multiple depictions of the rocket - all have different decal/paint jobs. None match what you get.
And there are two decals with the Star Fighter name on them. One is printed normal. The other is printed in reverse (like how some ambulances are marked in the front). The lettering can only be read if you look at it via a mirror. There are a few other problems with them as well. I have to admit they look cool, but I'm not sure they are worth the price.

But the final bird is below, top, bottom, and side view. Despite my gripes I think it came out OK....

Still need to do a clear coat

Nice job Les!
Not sure I'll order the decals for mine, will have to wait and see how I feel when I get around to building it.....
L

Finally got to fly this rocket.

Loaded with a CTI F36 Smokey. I did more of a mindsim and cut back the delay to 8 seconds.
Launch, arching, waiting, waiting, hear whistling, and then deployment.
Came down in 3 parts - body, cone, and chute.

Easily found body. Went and retrieved chute (and discovered the cone was not attached)
Then spent 20~30 minutes zigzagging across the field. Was just giving up and started to head back in when I found it.

Sorry to hear. It is a beautiful build. Hope it is repairable to fly again.
L