Went for my level 2 flight yesterday. No sweat. I have done my homework and was confident when it was go time. Only thing I was slightly concerned with was the X-factor as I come to call it aka Murphy's Law. Those little things you have little or no control over: faulty closures, faulty reloads, battery exploding for no reason, and so on. And maybe a little concerned about the chutes tangling. I was confident in all things I could control though.

I made a perfect score on the test. Can't remember the last written test I took. But nothing to it.

On to the flight report:

Rocket was a Binder Design Tyrannosaur. Sitting on the pad it was a beefy 10 pounds.
Motor was an AT 54/852 J315R. I wanted to keep it in sight to see the apogee event. It nearly went out of sight still.
My data sheet I had on hand in case Paul through me a curve ball. 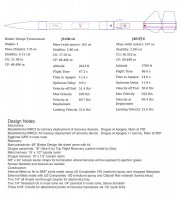 He did almost trip me up when he asked how I calculated my BP charges. Uhmmmm.. I ground tested starting at... Good answer. I did successful ground tests.

We arrived on site at around 10 and was finally flight ready around 1 PM - after the written exam and a hasty recovery effort of the previous flight (landed in the path of a hay baler), and my triple checking all connections and finalizing my checklist. Wind was picking up but wasn't as bad I have seen it probably still less than 10 mph. I made sure to angle the rocket so it would fly away from the rocket magnet power lines. I've hit them twice so far and one of those times the rocket hung there all night.

I never did take pictures of it after buffing and before packing it up for the flight. But it is Emerald Green Metallic with black vinyl. At times it is so dark you can't see the decals.
Here she is pre-flight waiting for final inspection:

You can see the camera on the altimeter bay. I used some clay to get a rough shaped and vacuum formed a shroud out of ABS. Doesn't look great but it did the trick. Okay it looks like hell, but it still works.
And note the igniter taped to the side. Because I have been known to forget them.

I decided to snap pictures of the flight because my dad is better with the filming part than I am...when it is someone else's rocket. He was playing with the lenses and had something unlocked and didn't get to film it. That's a bit of a bummer. I can pull really good stills from his videos. I had a static camera set up and got a liftoff shot but not much to it. I was going to underexpose it to make the flame pop out, but they turned out good anyway. Man I love those red flames. Would be even better chuffing black smoke as well.

I missed my sim altitude by about 300 feet. But that is regular for me. The spin going up may have ate some altitude, along with the camera on the side. I know one of my talon fins is a little off that probably caused the spin but it wasn't bad.

It was a time consuming process. I had two other motors built and ready to fly but didn't feel like going through the cleanup of the casings. So we called it a day. I eyed the J401 for next flight but decided to hold off. These J motors will break a man if he's not careful!

I had an EggFinder on board for it's maiden flight. I had a good signal up til launch. I walked around with the Rocket Locator app and Blue GPS running and it was working great. I left the LCD sitting on my table and not bluetoothed to my phone as I went to the LCO table so I don't know what all was going on when launched. I knew the flight would be visible the entire time so I wasn't concerned with losing it. I hate using degrees. I use military 10 digit grids at work and my GPS is set to that. Blue GPS will give you a grid, but I'm not sure what format it is. I turned it all off and just walked to my rocket. I looked at the strings from my data logger and it did in fact log the location of the rocket but...well, anyway, I need more practice with it.

On to the video. The on board camera I think I paid 8 bucks for so the video isn't the greatest but oh well.

I will give a quick shot out to user Mendal aka David Fliger - owner of Rocket Junkies. He supplied me with the charge wells for this flight. Simple, and elegant, and good looking.

Overall gorgeous flight. Thanks for looking.

MikeyDSlagle said:
Went for my level 2 flight yesterday. No sweat. [...]Overall gorgeous flight. Thanks for looking.
Click to expand...

Looks like you made some fun memories this weekend!
:flyingpig:

Congrats on the flight. L2 opens up some nice motors to burn :wink:

L3? What are you thinking about building?

Congratulations on the cert!

Congrats on the L2!

Nice job. Congrats on your Level 2

I'll have to add "Cert failed due to Haybailer damage" to my list of unlikely issues to watch out for.

Awesome! Welcome to an an exciting new world!
A


MikeyDSlagle said:
Rocket was a Binder Design Tyrannosaur. Sitting on the pad it was a beefy 10 pounds.
Click to expand...

Thanks folks. Had a great time.
As for L3..don't know when I'll get to that, if ever. L2 motors are pricey and an L is pretty dang big. I'll hang out in L2 for a while and slowly gather parts for a possible future L3. I have a large tube that may work for a short stubby project, will need to glass it. No room to store a rocket that big ATM.

Yeah I tend to build heavy. It won't fly on the 1 grain AT 54 motors, too slow off the rail. But we did get a longer rail so I may can now, but unlikely. It's a J eater. Lol. It is built solid enough to handle a K, so long as the fins can take it. Fairly sure they can.

Next on the list:
Clustering and air starts. I have a Viper IV for just that.
Get a handle on using my EggFinder
Build a MAC rocket
Build a PML rocket
Research motors
Glass a tube
Last edited: Oct 2, 2017

MikeyDSlagle said:
No room to store a rocket that big ATM.
Click to expand...