OK ScrapDaddy:
In the beginning...No really shortly after the release of Quests Micro Maxx Product line in late 1999 with MMX-1 motors #5662, NAR designationed 1/8A.2-1. It was obvious at least clustering was going to be something that needed to be looked at. Since 2x1/4A cluster Altitude was the last cl-alt event in the pink book I thought 3x1/8A Cluster Altitude sounded logical and went about designing and flying one. Works very nice.. but alas the powered that be decided to leave it a 2x1/8A a couple years later So we built several versions from quilifier to super Streamlined.

About the same time I decided it would be fun & possibly funny to produce a "Full A" micro powered model. At the time we really didn't have all the data on the motor nailed down and I was under the impression the motors were 1/8A's SO.... an 8 motor cluster was designed, built and tested...Wow! now that's micro power!!! LOL. Unfortunately this was before I bought a digital camera and neglected to photographic the model in it's raw unpainted development stage.....and as luck always has it while testing things this model ended up lost...stuck in the top of a very tall Oak in the woods next to the launch site. I've ment to build another but it's just never gotten to the top of the To Do pile. Since I know how well it works I guess it's just not a priority. I do have the one page plan Uploaded over in the MicroMaxRockets group files if your really interested in seeing how it looked.

When looking at Micro Clusters their are a couple very important considerations that aren't immediately apparent but can cause trouble for Competition flyers. Number ONE on the list is if your flying a minumum diameter model with Tracking powder the powder MUST be contained in some way to keep it from acting much like sand in an earthquake creating an ejection proof barrier for your recovery system. This has cost me highly with a couple of flights that tracked to 85m by were DQ'ed for NO recovery deployment. Second: making the model as Slick as possible is paramont with the smallest possible frontal area. 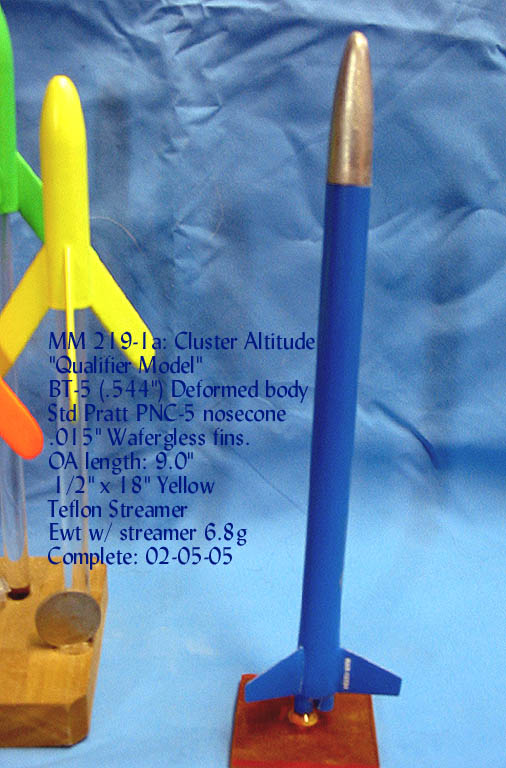 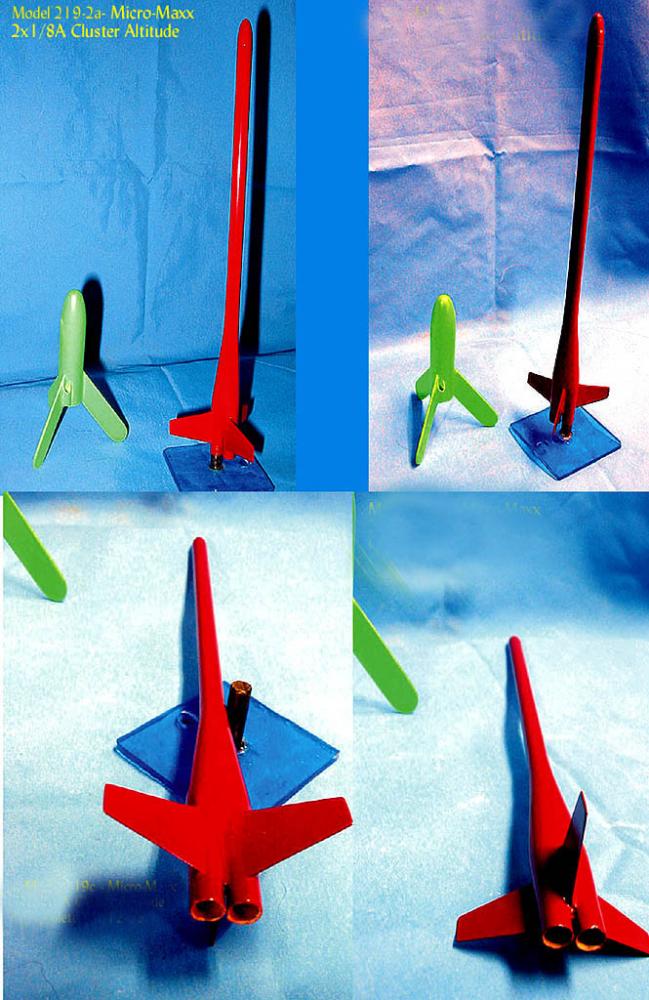 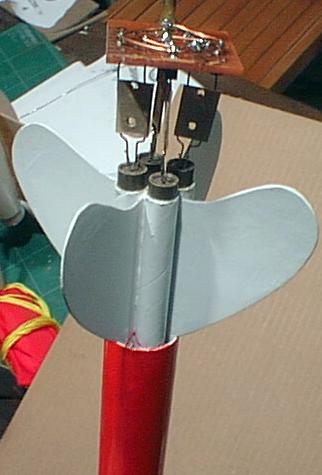 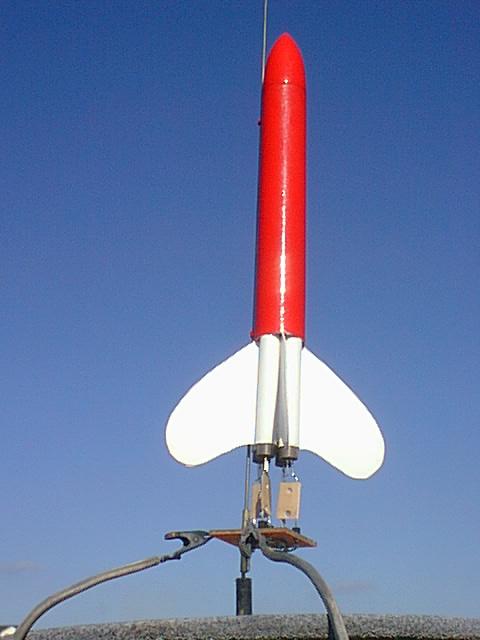 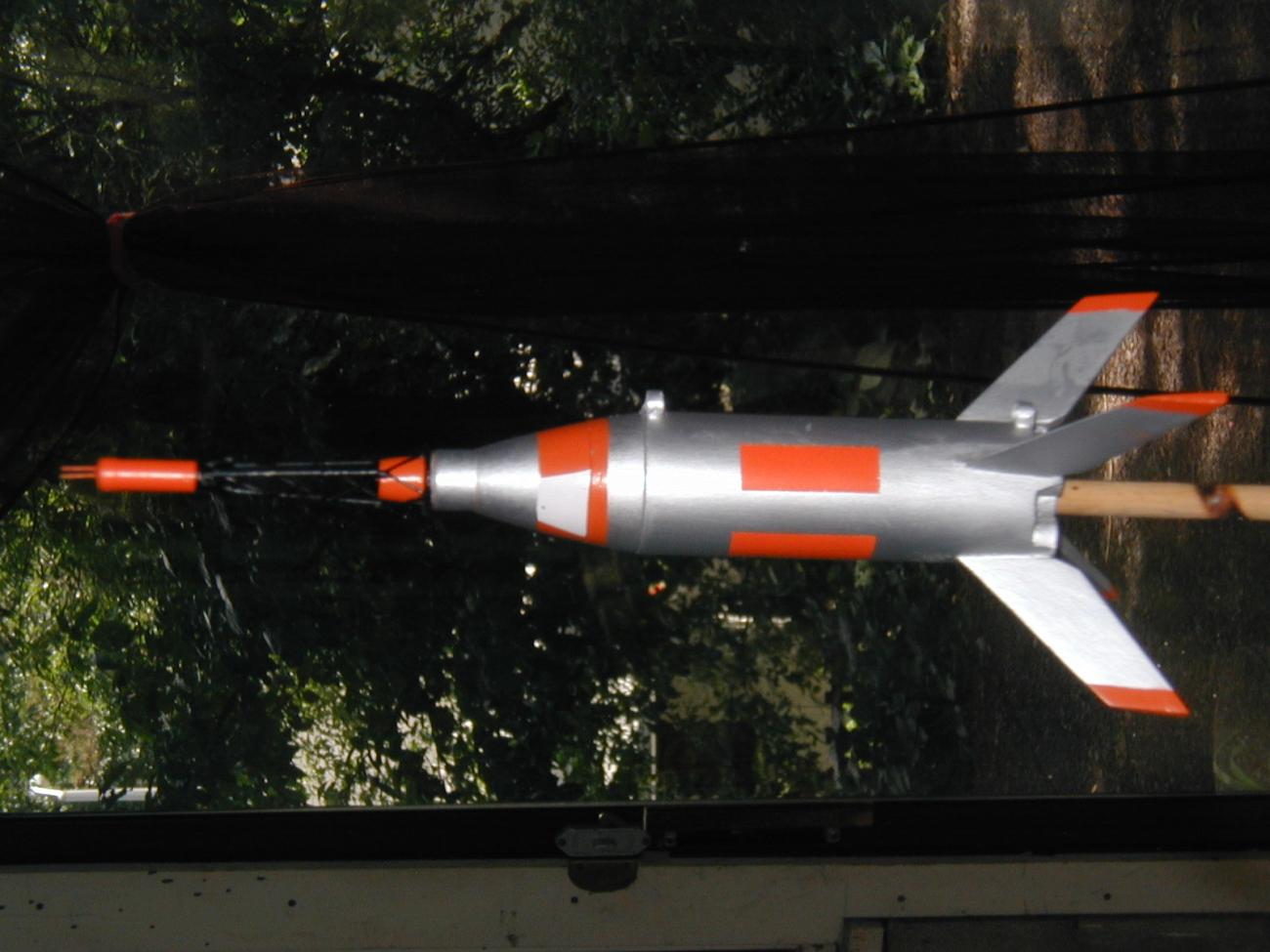 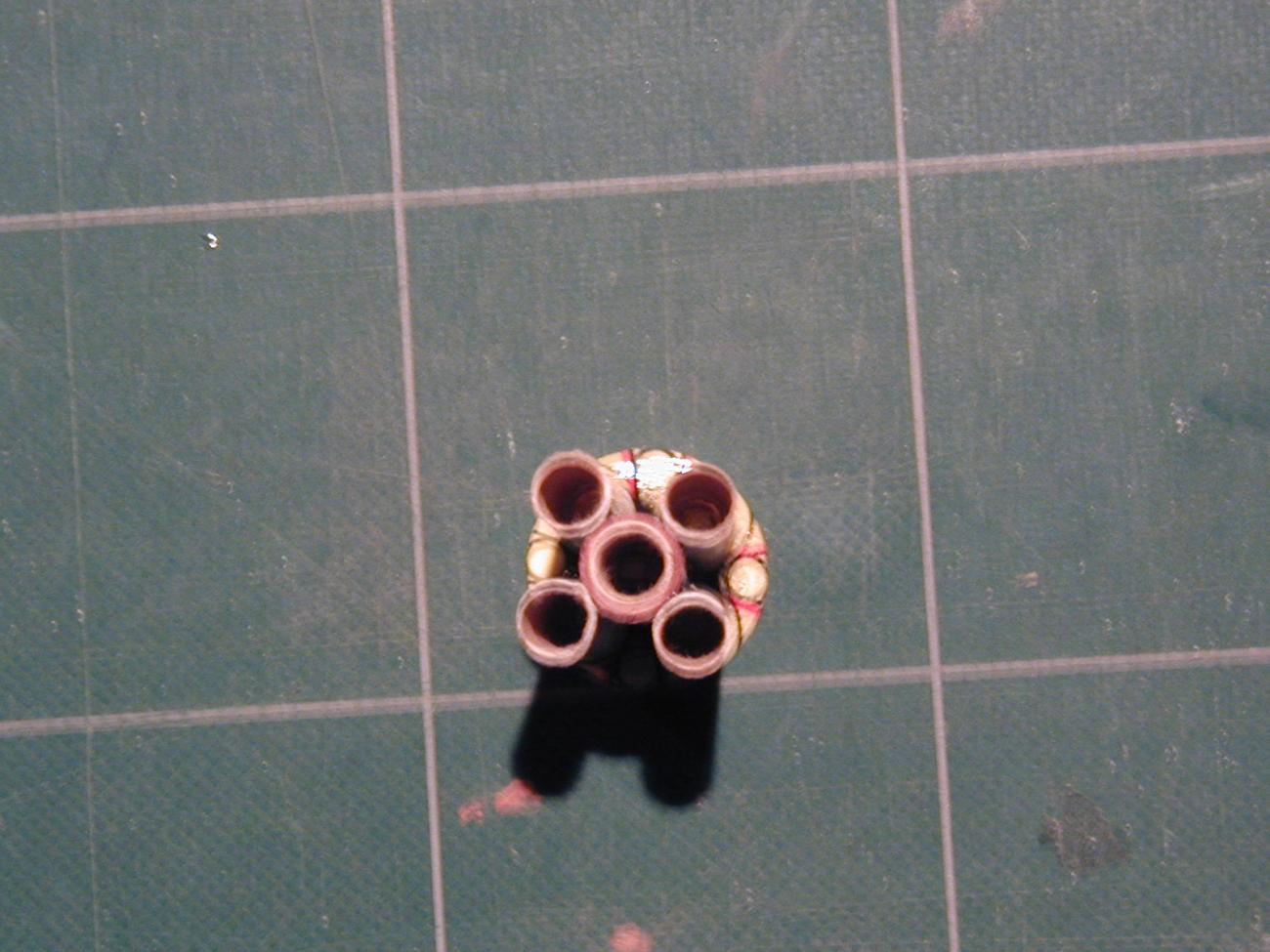 Very KEWL Bill!
I love that Little joe-I, it's gotta be one of the best looking micro Scale models i've seen. And that is a WHOLE other thread subject. Micro Scale.

A couple more of mine:
I think it was mentioned in the earlier thread on heaviest models my BT-20 4 MMX clustered Ranger Downscale. It's set-up with LED's imbedded in the hollowed out balsa nosecone and powered by a 3volt Lithium coincell. recovers on a 10" chute. very nice little flyer on 4 MMX-II's. Sure puts out a lot more fire then I ever thought.

and a 14mm base 2 mmx-II motor Cluster downscale of the Taurus. 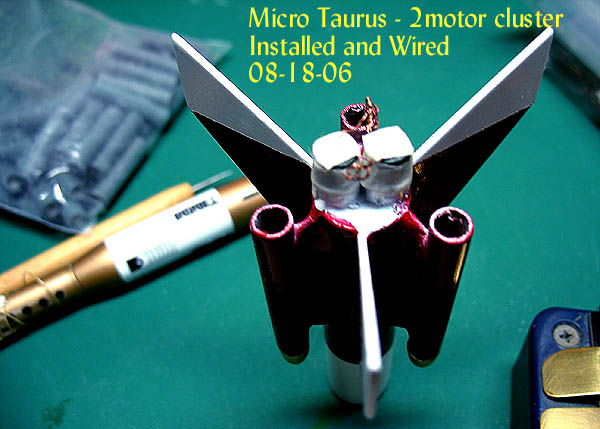 Now to sort of answer ScrapDaddy's clustering question.
Clustering micors takes only a tiny bit more patients then clustering normal BP motors.
As Mark mentioned in the other thread LONG before Micro Maxx was ever thought of I was deeply into clustering. It's always been one of my favorite methods of flying....what do I mean "method" well, there is a great deal more involved in getting multi motors going at the same time then just sticking igniters in the nozzles. And some really interesting things that have to happen in the first few milli seconds that combine to create either a spectacular flight or equally impressive failures.
As Lord Badin Powell said about Scouting. "The Patrol Method is not A way to run a Troop, it's the only way" So I say " Relay Ignition is not A way to Launch clustered BP motors, It's the only Reliable way". Be they Standard 13 to 24mm or now our 6.1mm Micro motors.

A relay ignition system isn't necessary for most 2 motor clusters, but can help. for 3 or more motors a relay, GOOD HOT battery, and igniter care all combine in a method that has a very long proven reliablilty rate that is second to nothing out there. Having logged several thousand clustered flights over the last 4 decades I can still report only a bakers dozen (13) motors in all those clusters that didn't ignite. two of which were purposely flown igniterless tests so they really shouldn't be included but the flights are logged as clusters so they do. Of the remaining 11, 3 were motor CATO's One over pressure D12 and 2 blow throughs A C6 and D12. The last 8 were all igniter problems...and I have concluded that fault on all but one was directly the fault of the installer. the one was a BAD igniter straight from the motor pack.
I can't stress enough to anyone flying clusters TEST, TEST, TEST every single igniter you use. before and after installation in the motor and one last time on the pad. This instructions is mainly for home made and all Estes "solar" igniters. Quest new Q2g2's should also be tested but make very very sure your testing probe is E-Match low current safe.

I'm not going to go further into the System here as I've already written a complete Tech-Tip on the subject which is currently available for download from the narhams.org web site in the Library sections, Tech-Tip-006 Clustering BP motors.
It's possible to build and carry with you a small 10-15amp DPDT 12v coil Rangebox Relay that can be used on just about anyones 12V range equipment. or with your own 12v Hobbico 7amp/hr gel-Cell battery.
I personally use one of these little 15amp Radio shack plug in relay systems to all my micro clusters 3-8 motors. It has never let me down when used following the procedure outlined in the article mentioned above.

Are there other ways to launch micro clusters...Of course...but after spending the amount of time we do on our models is it worth a potential crash to not use a Long term nearly 99% proven menthod 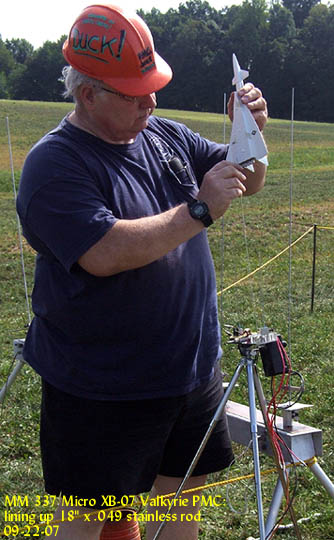 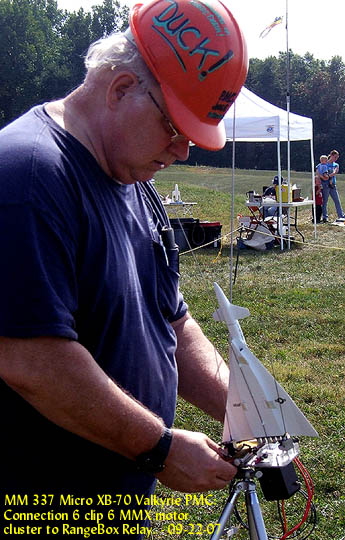 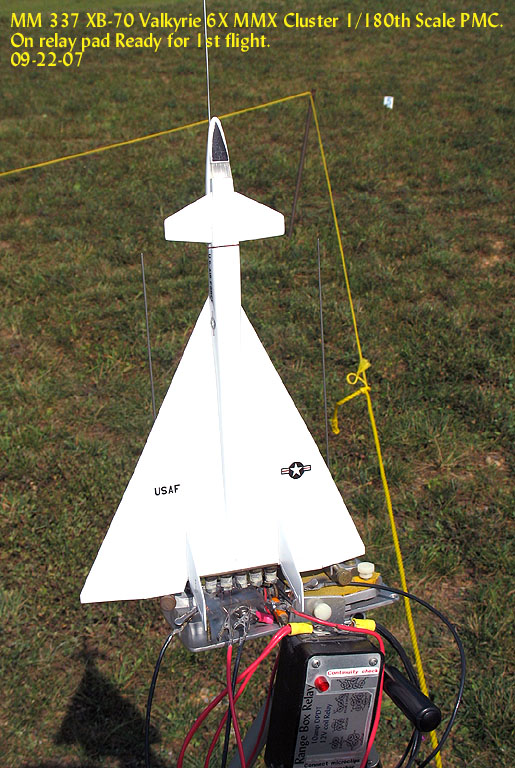 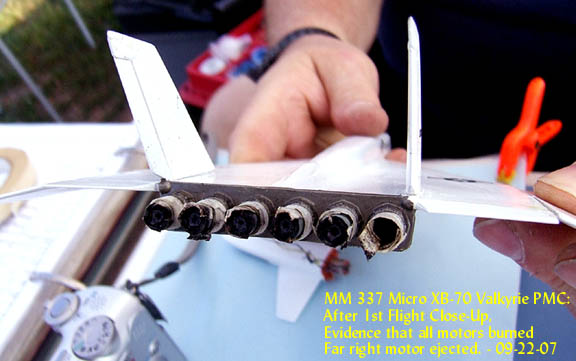 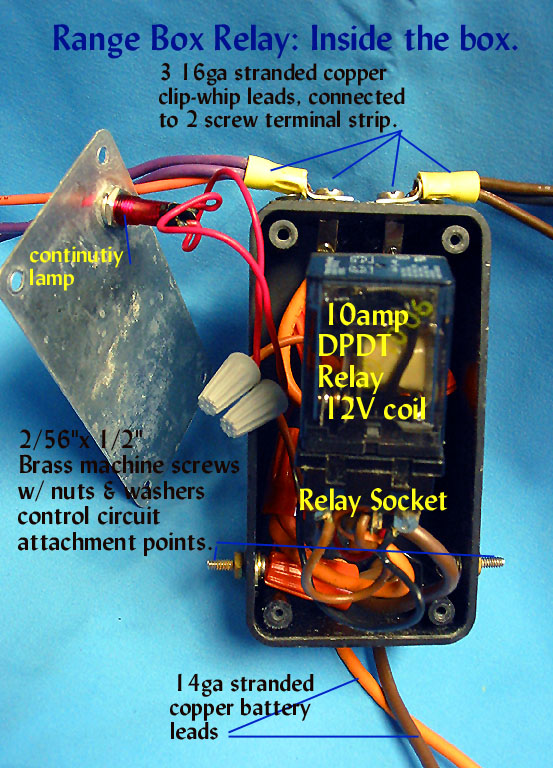 So far, my only cluster is a MMX conversion of a Starlight Micro.
I used a Flis 2X motor mount and rigged it for streamer recovery.
It's a bit draggy but flies well. The best part is hearing the LSO
say "Micro Micro" over the PA. 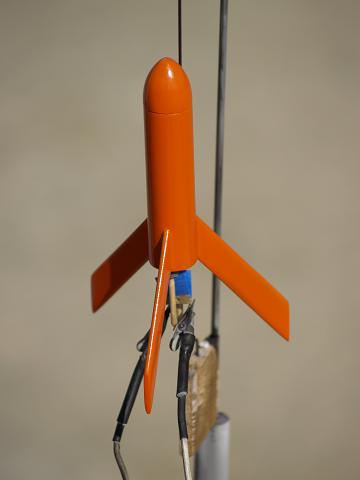 Huge Blues said:
So far, my only cluster is a MMX conversion of a Starlight Micro.
I used a Flis 2X motor mount and rigged it for streamer recovery.
It's a bit draggy but flies well. The best part is hearing the LSO
say "Micro Micro" over the PA.
Click to expand...

Very Nifty conversion Huge Blues!
It does seem funny, when the RSO call for everyone to stand and pay attention the the next clustered flight... a Micro Maxx X-motor cluster.... LOL!!!
it's almost as much fun has having a "Big Honkin' Rocket" on the pad:clap:


Another of the decent flying little 2 motor clusters it the Fliskit. Deminitive Deuce. While we loose some altitude to the canted motors it's still neat to see the smoke trail.

I'm also looking at adding booster motor tubes inside the outer body tubes of the overweight Tumbleweed giving it all kinds of 3 to 7 motor options LOL.

A couple other funny little 2 motor micro clusters is the micro spinring thing and whirlygig. both are more Odd-Roc then straight model but they do get a lot of attention. 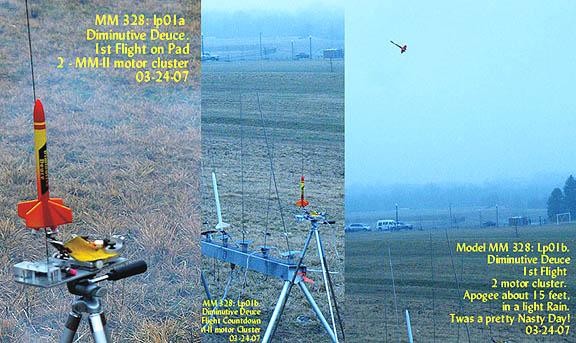 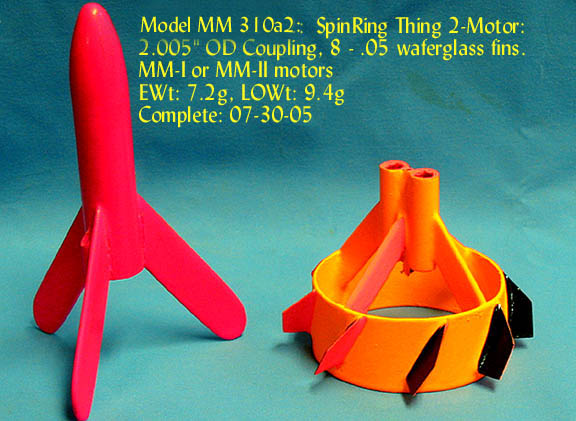 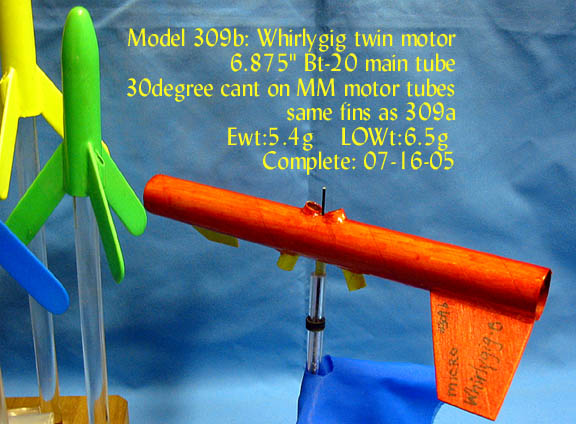 Huge Blues said:
So far, my only cluster is a MMX conversion of a Starlight Micro.
I used a Flis 2X motor mount and rigged it for streamer recovery.
It's a bit draggy but flies well. The best part is hearing the LSO
say "Micro Micro" over the PA.
Click to expand...

Too Cool
Mr. Bob
You must log in or register to reply here.