I am in need of a replacement launch controller for my little Estes Electron-Beam. I want it to be 12V, and was thinking of building my own rather than paying the high prices that are charged for pre-built ones. I found this: https://principialabs.com/electronic-launch-control-system/ but don't really need a relay controller, nor one that fires multiple rockets. I have very little (basically no) electronics experience, so I really need step by step instructions. If anyone has any advice or instructions, It would be very helpful .

I've attached a drawing for a simple launch controller. It can be built with two launch switchs (S3 & S4) for two hand operation. It uses a LED circuit for continuity check. It's based on using a small motorcycle/atv/lawn mower lead acid battery. These can be found pretty cheap and will launch any cluster you want. A car battery can also be used.

You can put all the switchs on a box and put large clips on leads that attach to the battery, then you can use your car if you want.

I would recommend wiring it with at least 16 ga wire. A 50 ft roll of lamp cord is what I bought so I have well over the 30 ft length required for the E and larger motors.

Let me know if you have any questions.

It isn't very hard to "upgrade" an Estes controller into something more useful. I've done it twice with my Estes Solar Controller and Pola-Pulse controller.

You basically just open the case of the controller and replace the dinky bell wire Estes uses with good lamp cord you can buy in rolls rather cheaply at any dollar store or hardware store. I installed regular 2-blade 110V wall plug male and female ends on mine so I can use a regular 25 or 50 foot extension cord for the launch leads, with a female plug on a 1-3 foot long piece of lamp cord coming out of the rocket, and another 1-3 foot piece of lamp cord with micro-clips soldered on one end and a male plug on the other, with the extension cord plugged in between the two. I ran a piece of lamp cord about 3 feet out the other end of the case (whittle a small hole with a hobby knife and tie a knot in the cord for strain relief) and install a pair of "battery charger" style clips on the ends of the wire to connect up to whatever battery you plan on using.

You should also replace the dinky flashlight bulb Estes uses with an LED-- some people install LED flashlight bulbs or pinball machine bulbs (shreadvector has some GREAT links for those and will chime in I'm sure) or you can get 'LED indicators' from Radio Shack (along with microclips and whatever other stuff you need) pretty cheaply-- they're an LED with the resistor already built in to prevent burning out the LED bridge (the light emitting semiconductor inside) by preventing it from passing too much current. I've also just used regular LED's and soldered a resistor to one leg of it to throttle the current. The LED indicators are nice though-- already in a threaded housing-- just drill a hole and install them, and 2 nice thin electric leads a few inches long to make the connections inside the controller. I installed TWO different LED indicators on mine-- A red one that glows constantly when connected to a power source, and an amber one that only glows when I have the key installed and continuity to launch. I did that because way-back-when I used to connect it straight to the car battery by raising the hood and sometimes I wouldn't have continuity to launch, and was never quite sure if the problem was at the battery end or rocket end. Now I know if the red LED is on, I have a good battery connection, and the problem IS the rocket ignitor end!

For a battery, I use a "car jump starter" pack-- they are 12 V sealed gel-cell batteries in a plastic carrying case, usually with a light or small air compressor build in to the case, with a recharging plug (mine uses either a regular car cigarette lighter plug or a wall plug adapter with a cigarette lighter plug end to charge either in the house or in the car-- very handy!) I just connect my controller clips directly to the "jumper cables" of the pack and it works terrific-- those car booster packs deliver a LOT of power and last a LONG time! Plus, when you're not launching with it, it's a handy thing to have in the car anyway in case you forget your lights on, or your battery goes down or the car is slow to start on a cold morning... and with the recharge options it's very handy to keep in the car or garage. On mine I COULD put a cigarette lighter plug on my launch controllers if I wanted and run them off the pack that way, or run anything else that with a cigarette lighter plug off the pack at the field (car stuff that plugs into the cig lighter). They aren't very expensive compared to their usefulness!

All the parts will probably cost between $10-20 bucks, not including the car-jumper pack which can run as low as about $30 from Northern Tool or one of the other 'cheap online' vendors to as much as $50 or so from local auto supply stores or hardware places, depending on the accessories they have installed (mine only has a flashlight installed in the case, most I see now have a small emergency air compressor for airing up flat tires, so they cost a bit more) The whole thing shouldn't take over an afternoon to do.

Here's a few pics and diagrams... one diagram is just a basic circuit diagram in case you want to build your own from scratch using Radio Shack switches and components, the other is actually a drawing of all the internal connections and parts of the Estes Solar Controller I modded, with the Pola-Pulse being nearly identical (as is the newer Estes controllers) Hope this helps and good luck! OL JR 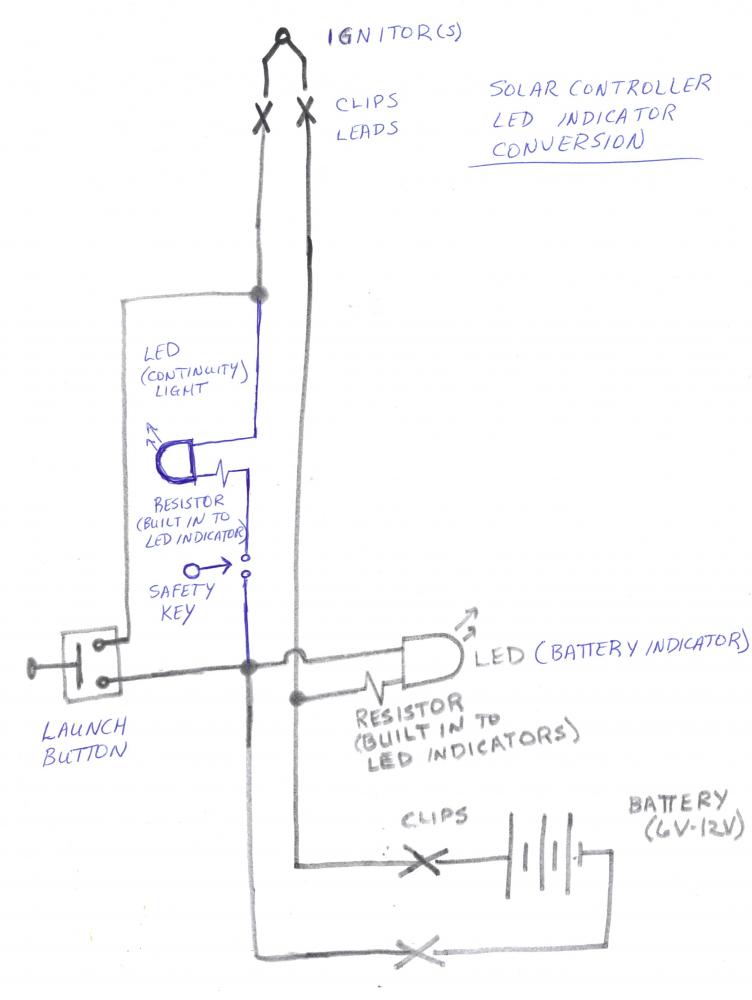 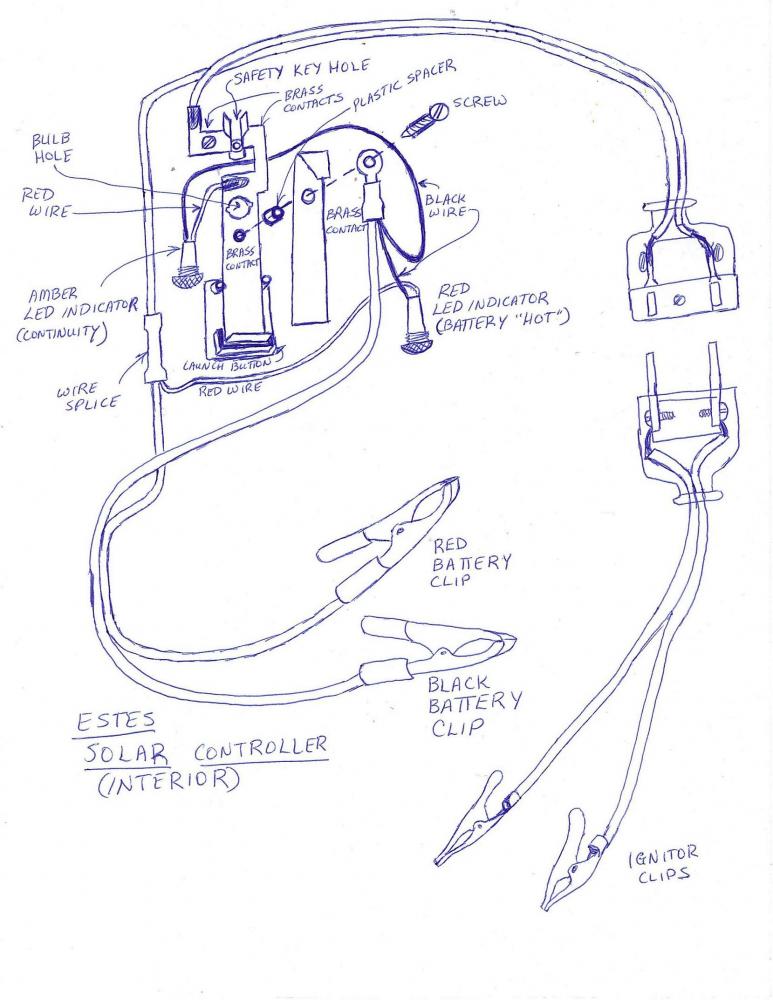 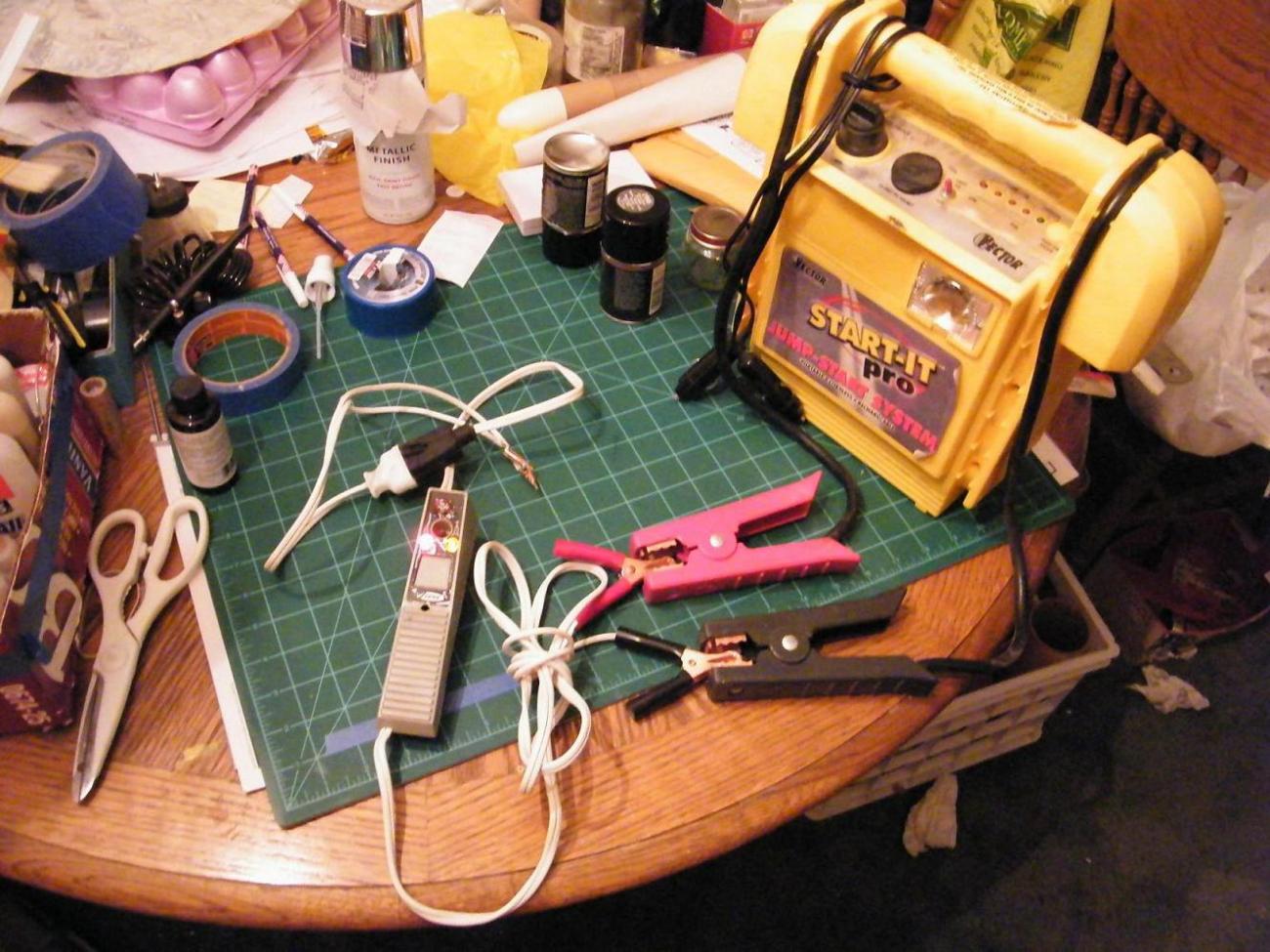 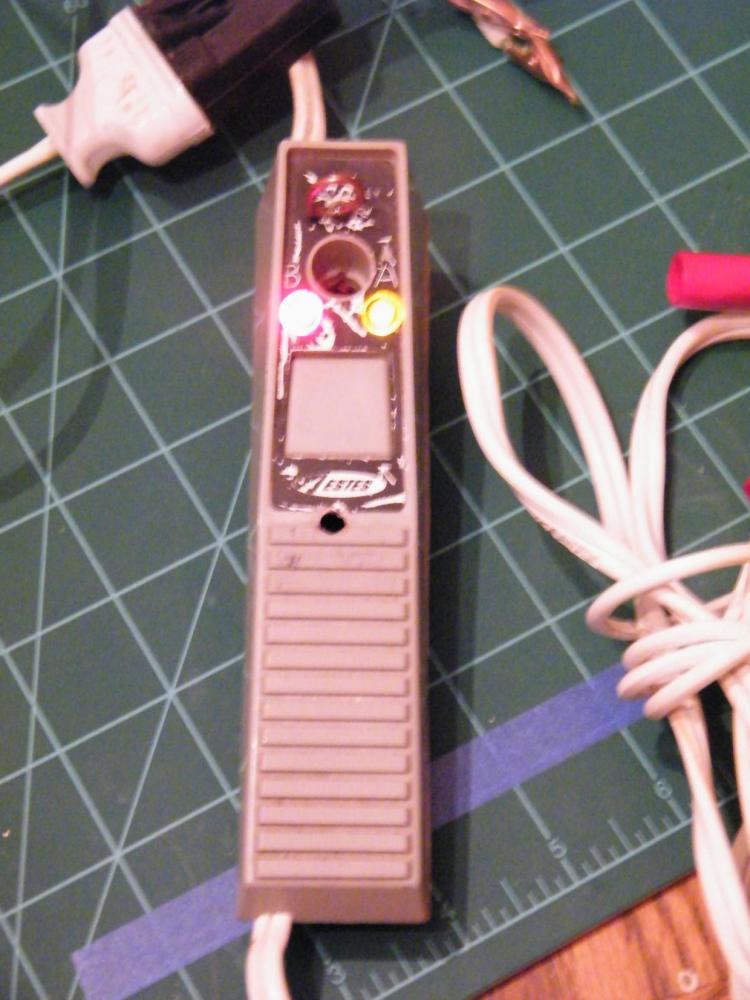 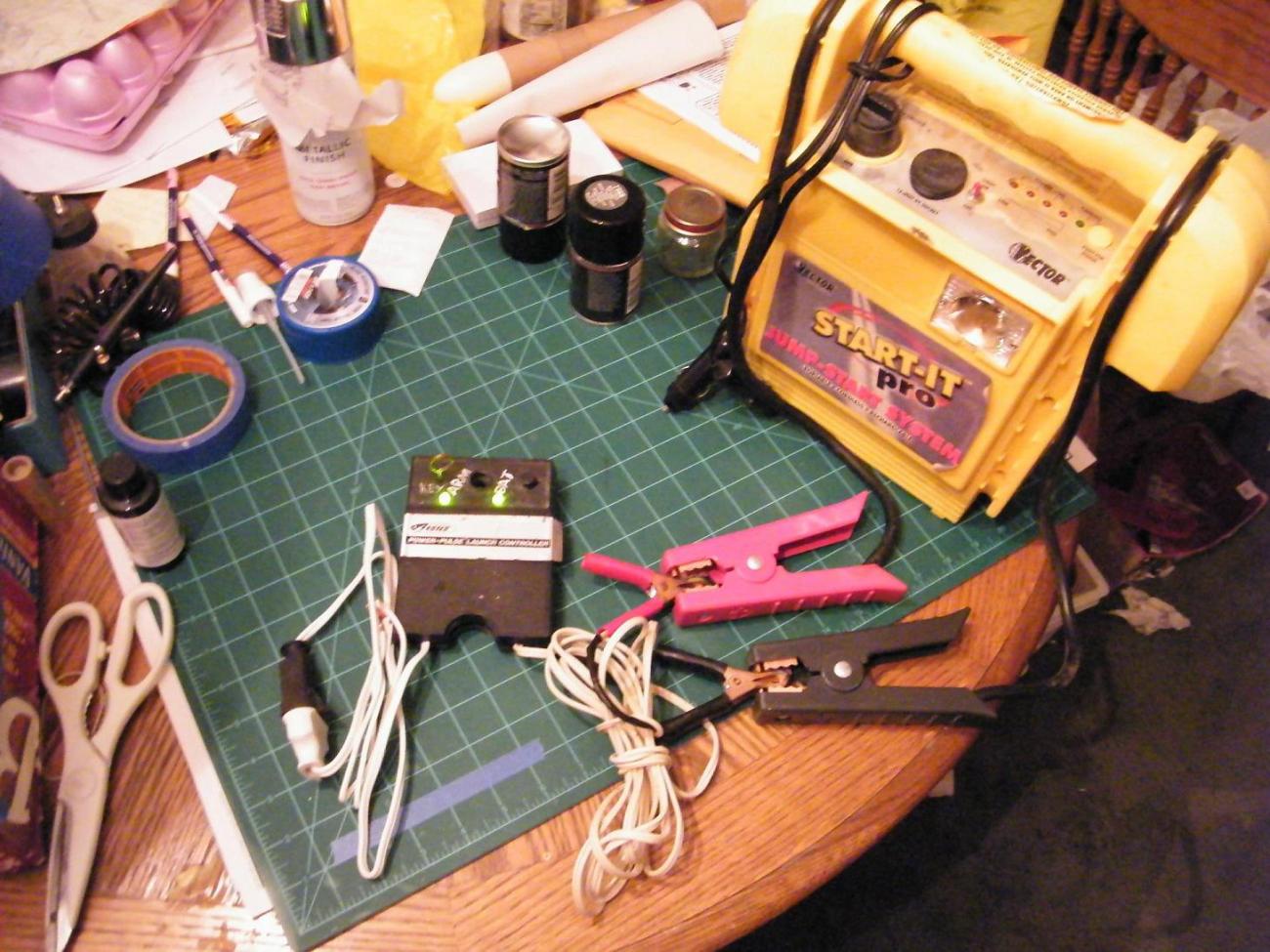 Here's one more pic since it will only let you post five at a time...

Also, remember that LED's ARE POLARIZED, meaning you have to connect them up inside with the right polarity or they won't light up; test to be sure before you make the final connections, and also make sure you connect them to the battery with the correct polarity-- the red/black battery charger clips come in handy for that, or if you install a cigarette lighter plug on your controller power lead cord, test the polarity of the connection before you solder the wires together.

Also, I recommend you make your own "launch keys" as the STEEL Estes keys are kinda crappy-- the corrode and don't conduct very well, and don't make a very good connection with the brass contacts inside the Estes controllers--at the hardware store I get waste clippings and bits of 110V house wiring (Romex) for free, then strip the wires out when I get home, cut a piece about three inches long , make a loop on one end with pliers, and solder the loop closed to make the key 'handle'. The Romex fits perfectly in the hole in the Estes controller (14 guage Romex IIRC) and the softer copper conducts MUCH better and makes better contact with the brass contacts inside the controller case. 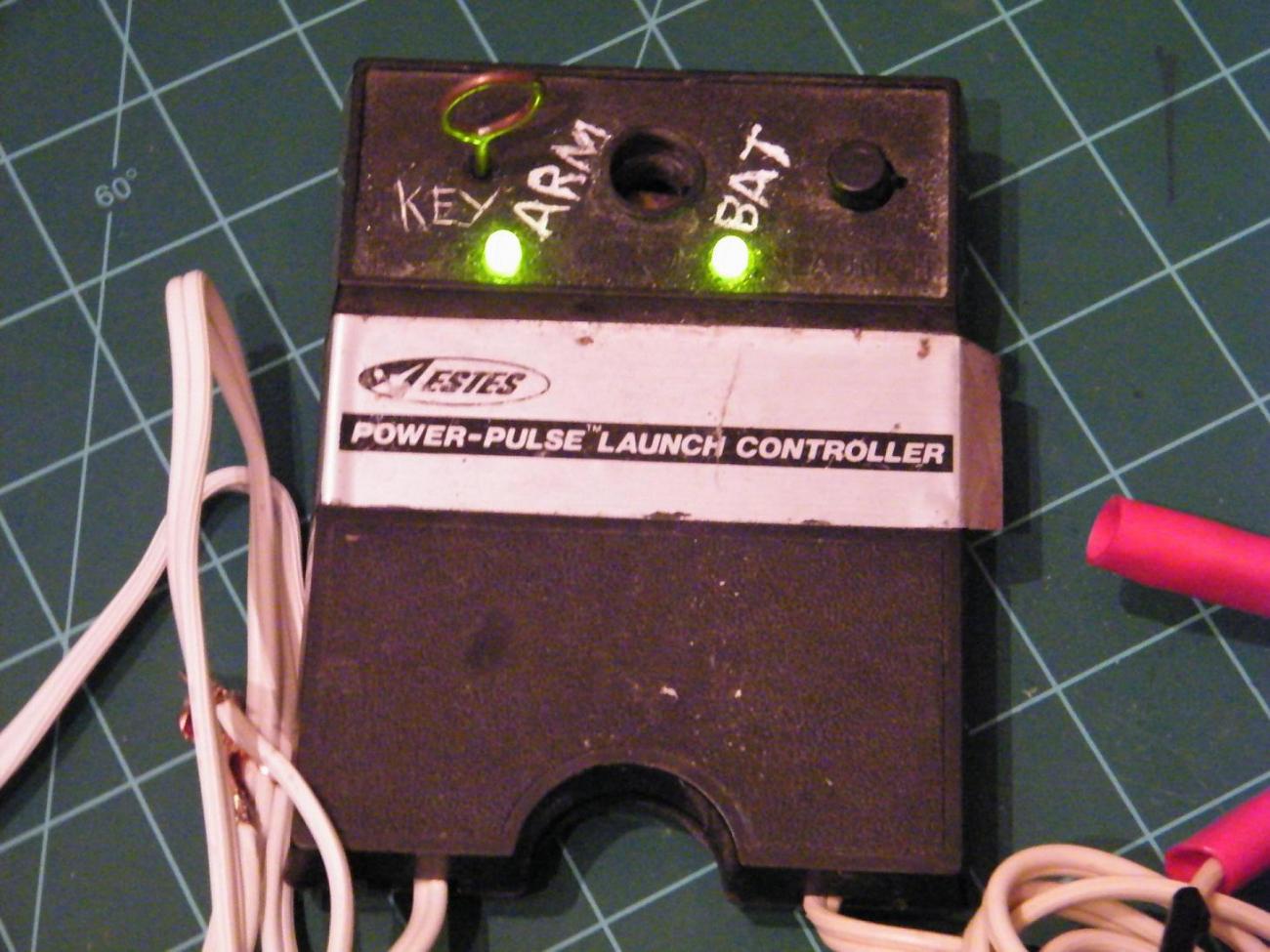 But the lead free solder that contains traces of lead won't give anyone outside of California cancer, will it?

Bazookadale said:
But the lead free solder that contains traces of lead won't give anyone outside of California cancer, will it?
Click to expand...

Bazookadale said:
But the lead free solder that contains traces of lead won't give anyone outside of California cancer, will it?
Click to expand...

Ya know, nearly everything I pick up now says on the back in fine print "contains a substance known to cause cancer by the State of Kalifornia".

My brother and I were looking at that one day and he said, "Well, I'm glad I'm not IN Kalifornia... stuff's ok if you use it in TEXAS"... :neener:

OL JR
You must log in or register to reply here.

S
Will my controller work