I like trying kits from a variety of manufacturers to see what each one does differently. I've tried to build at least the first kit from a given manufacturer stock to get a better sense of things.

I stumbled upon the Klima Andromeda on Apogee's website: a 4x18mm cluster in a 50mm body tube, 2.5'ish long. Looked like fun.

The Andrameda cluster engine rocket from Klima (made in Germany) uses four rocket motors when launched. It also features plywood parts that are cut with a CNC router in order to give them a 3D shape. Here is a good example of German engineering.
www.apogeerockets.com
Apogee has great pictures of the kit (better than mine) so I'd recommend looking there for good views of the individual components. The instructions are clear and in 5 or 6 six languages.

I started with the motor mount, which is a pair of CNC'd lite ply centering rings and 4 glassine-less 18mm motor tubes, plus a screw/nut/washer motor retention system. 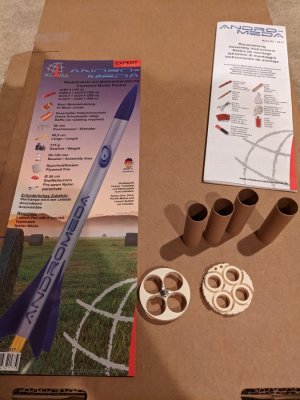 You start by gluing the screw and one nut into the aft centering ring. From there the four motor tubes get glued into the fore centering ring, with its cool included thrust rings. I really like this component. Finally the aft ring slides into the four motor tubes. I hit my first small snag here, though: I thought I was pretty liberal with the TB3, but the aft ring started to get stuck and I had to push down pretty hard to get it to the right location. I snapped off a section, luckily it fit back in well and I just glued it in place. The lite ply combined with the thin walls of the centering ring is pretty week at those thin points. 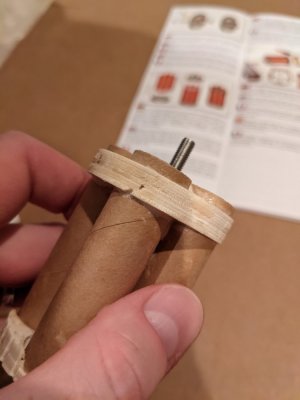 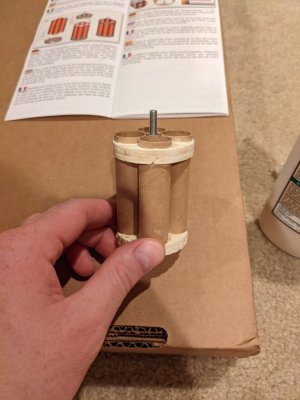 While the motor mount dried, I skipped ahead a step to the baffle, which will be mounted in a zipper-less fashion in the central coupler. 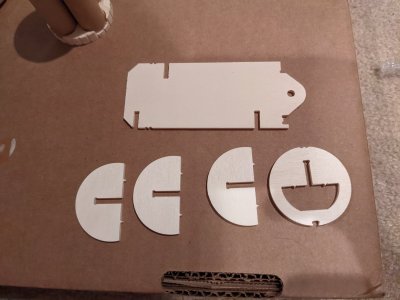 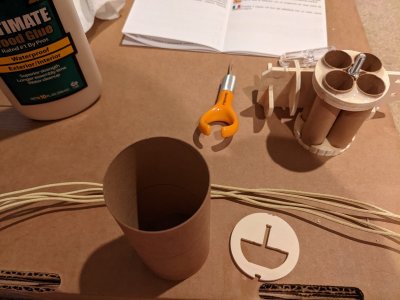 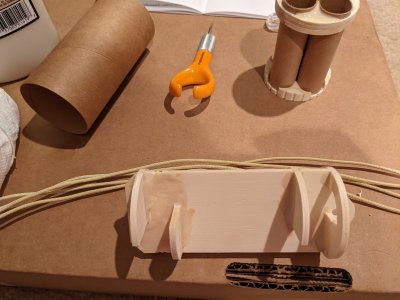 It's a pretty simple half moon affair with an anchor hole at one end. Went together easily. The coupler is very thin walled but that's fine when strengthened by this baffle. I'm a little concerned about the lite ply hole as the recovery attachment. 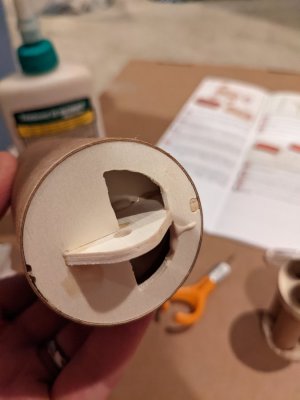 Then I glued the motor mount into the lower airframe. There's a small tool to help line up the fin slots with the valleys between the motor tubes that was helpful, though there was a bit more play than I would have liked. I don't think I lined them up perfectly, but they're close enough. 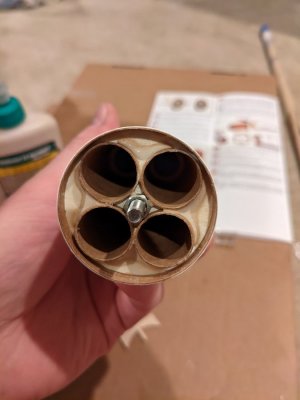 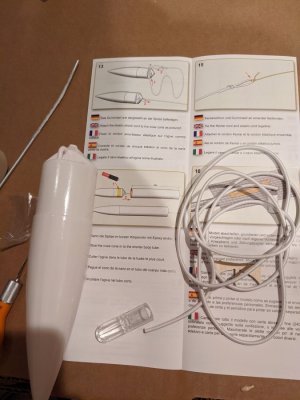 I built that section stock; the eyelet seems solid and the elastic is relatively thick. 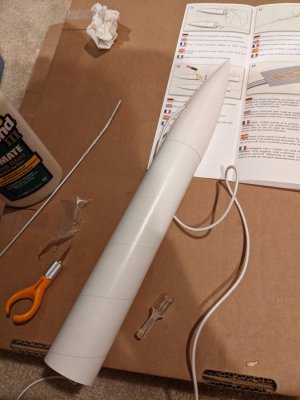 That initial build was all over a couple hours one night last week. I have since glued the coupler baffle into the main airframe (used white glue and didn't get it  quite as far as my mark before it seized up) and attached one of the fins. No pictures yet, but I do want to add some of the fins because they are much nicer plywood than the other wooden parts. Maybe 8 ply in 3mm?

1/4" launch lug comes with it, but I think I might make that the main departure from the stock build. I'll probably just go with a 3/16" lug; it's not heavier than the D-powered birds I've launched on those with no issues.

The one departure from the instructions so far is to skip epoxy for the nose cone and coupler attachments. I used some CA for the nose after roughing it up and white glue for the coupler. I just didn't want to be mixing up epoxy that night. We'll see if I regret that.

I've attached two fins, including some de-warping work. The fin tabs fit nicely in the valleys between the motor tubes. 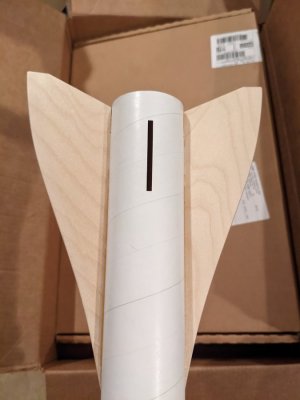 The fins are very nice 6-ply birch, some of the nicest 3mm ply I've seen. Some of that might be the CNC edges vs the usual laser cutting, though. 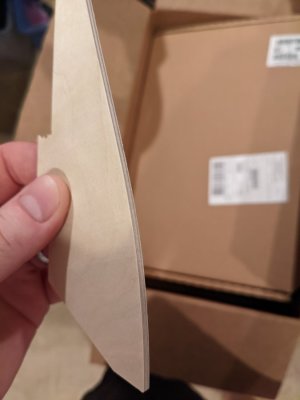 I have the third fin drying, clamped between angle iron pieces.

A four engine cluster would be better on a 6 foot, stainless 1/4 inch rod.
B

As someone that is a big fan of baffles, I like that design but can't help but feel like they would have been better off spacing the plates evenly throughout the baffle.

I agree with you on the attachment point for the Kevlar. That seems like a possible failure point to me. I would strengthen that area with a couple of pieces of scrap plywood.

Otherwise this is a great looking kit. I'm not familiar with the Kilma rockets but I have seen their motors. I think I'd like this even more if it was available with a single motor mount but that's an easy one to change.
Last edited: Jul 15, 2022

Daddyisabar said:
A four engine cluster would be better on a 6 foot, stainless 1/4 inch rod.
Click to expand...


Back_at_it said:
As someone that is a big fan of baffles, I like that design but can't help but feel like they would have been better off spacing the plates evenly throughout the baffle.

I agree with you on the attachment point for the Kevlar. That seems like a possible failure point to me. I would strengthen that area with a couple of pieces of scrap plywood.
Click to expand...

I doubt the spacing in the baffle matters. I need to make some files to laser cut my own for the future; I like the ability to insert this design with or without a coupler.

Good idea; I'll see how things fit if I add layers from both sides.

Out West we have plenty of 1/4 inch rods, work just fine. The old "rod whip is the rod's fault" story always gets a laugh from the Top Men. Don't worry about your white glue, it is much stronger than the bonding in you paper tube. Looks like German engineering in model rocket kit manufacturing is getting a little better, more in line with Merican tastes. Try an old Noris kit for a true German Engineering experience. Love the Falschurmhaltenrung! 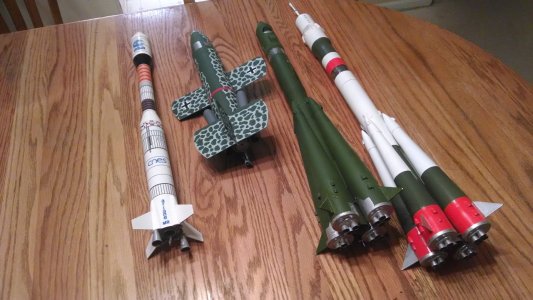 By coincidence I'm in the primer phase on my kit.
There is no need to strengthen the attachment point for the Kevlar mounting point however I would slightly round the edges so there are no sharp edges to weaken the Kevlar.
I always cover the inside baffle tube with an epoxy layer to avoid burning wood when using Estes motors. With Klima motors this is not an issue as they use a different kind of election charge powder.
Klima kits are all CNC machined. You will never find laser parts in any of the kits they produce.

Note:
Noris kits were designed in the mid 80's by a one man company. They are anything but German engineering however they do have unique kits other manufactures don't have in the lineup.
Klima rockets kits on the other hand are very well thought out kits with great fit and nice quality parts. The only small gripe I have is that some nose cone types could be better made (having a larger diameter than the body tube and rough, deep seams).

Finished most of the Andromeda assembly today. I elected to make another hole in the baffle deeper down for the kevlar. Fins have been attached over the past week and small quick-and-thick fillets formed last night. I'm 3D printing conformal rail lugs, so those will go on soon.

I hope I can prime it before it flies the first time, but I have a long list of things to prime and not much time where the humidity cooperates. Planning on 4x Estes B6 for the first flight. 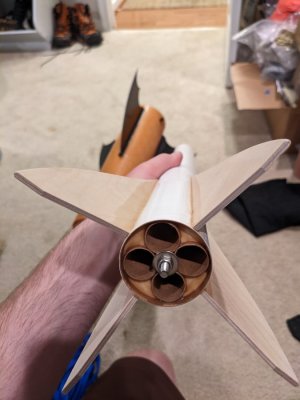 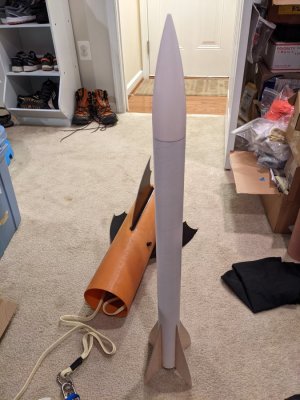 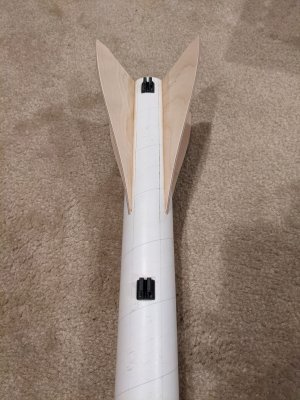 Rocket is next up with a PSII Nike Smoke for priming. Might fly first, though; it's really humid in MD and I don't get many chances to paint before 2100.