Kits you have built more than once

Talking about rockets you liked so much that after the first one was no longer fliable you built a replacment.

Estes Alpha and Alpha 3 - a few of each over the years.

Loc 4. First was my L1 cert rocket. Lost to a Pond/Lake at Bong. 2nd has become an ongoing project to see how long, and how many repairs I can do before it is lost.

Here's a few that come to mind:

Update - Forgot that Estes once had a program in the late 1970's and early 80's for selected builders to assemble kits for Estes, to be used by hobby shops or others who needed a built rocket. I did that a few times. Including IIRC 24, possibly 36, Maxi-Alpha 3's and some kits I never built for myself. So, that is a technicality since the spirit of this should be kits built for one's own reasons, not "for hire" (payment was Estes Merchandise certificates).

MPC Pioneer-1 (lost first one). MPC MoonGo (first one burned up on the pad). Probably some other duplicated MPC kits from my early days.

Estes Interceptor (second one was in a model display case in my High School Air Force JR ROTC classroom.... someone stole it).

I had a lot of Centuri kits (1/100 Little Joe was my first non-MPC kit , 5th overall, once I got into the hobby for real) but other than the 1/45 kit can't think of an example right now of any that I built more than one of.

update to above - Centuri 1/35 Mercury Redstone, at least twice.

Estes SkyDart glider (at least two kits, not including the 2X RC scale-up)

MPC Delta Katt glider (Not including a 2.5 or 3X scale-up)

Noticing a theme here about gliders? Also as I got better at designing my own gliders, I did less and less glider kits. Indeed my first Falcon never worked (dived on flight 1, shredded flight 2), and the second Falcon was built in 2016 along with the 2.5X scale-up for R/C)

Several Vector Aero Stingray R/C Rocket Gliders from 1996 to 2000 or so (Composite wing models that I did not have the equipment/skills at the time to make my own wings. Now I do). 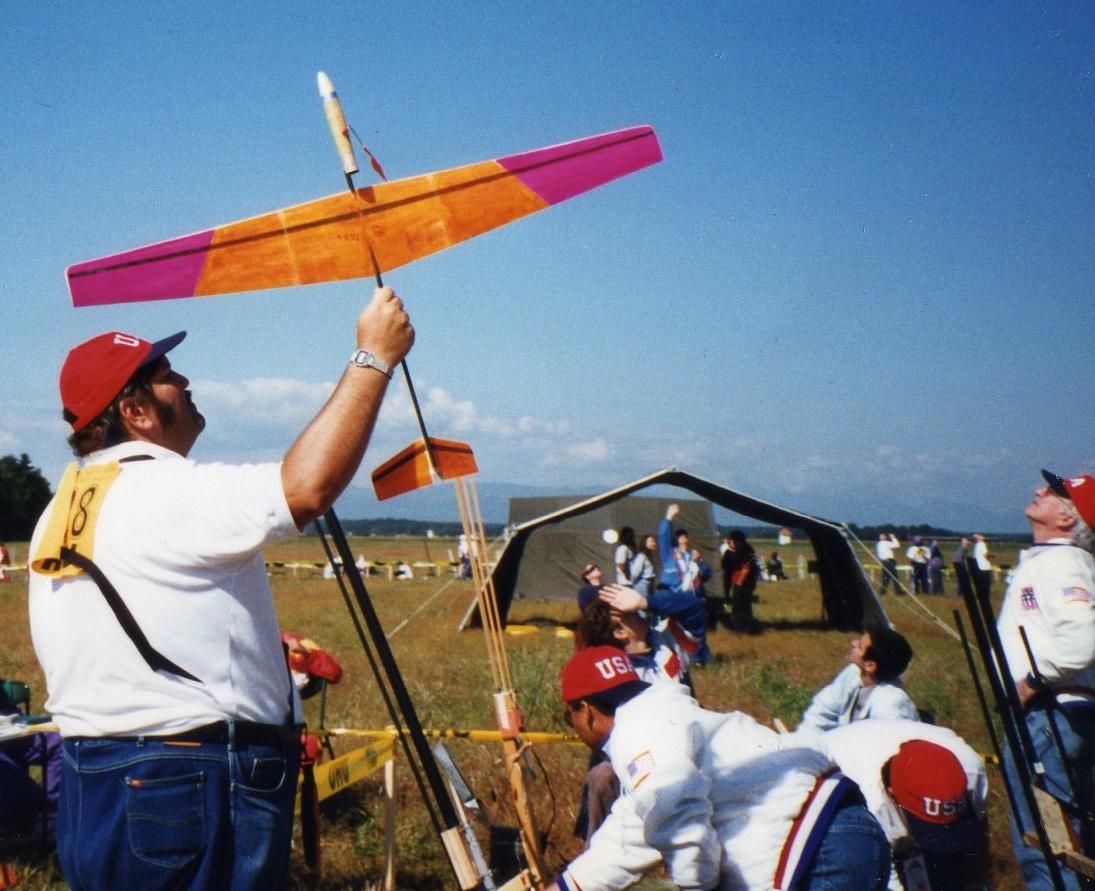 For me, not so many:

My most often replaced would definitely be the Estes Wac Corporal. The latest is a not-quite-finished clone (Still needs paint).

When I was a kid that was the one I always had to have in the fleet. I had a lot of Alphas and Alpha IIIs as well, but when a WAC was lost or retired it was replaced as soon as possible. 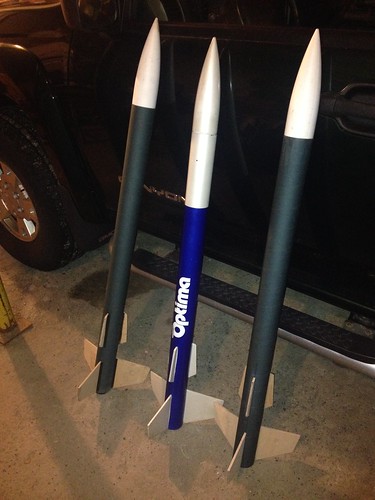 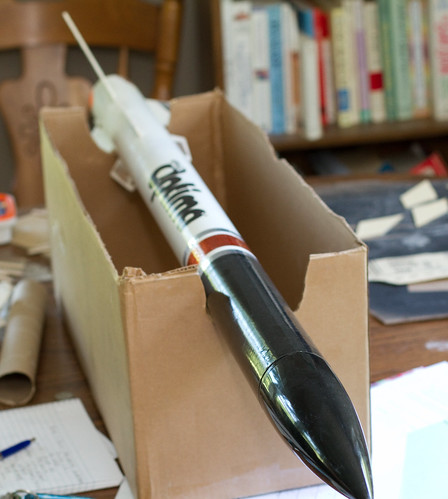 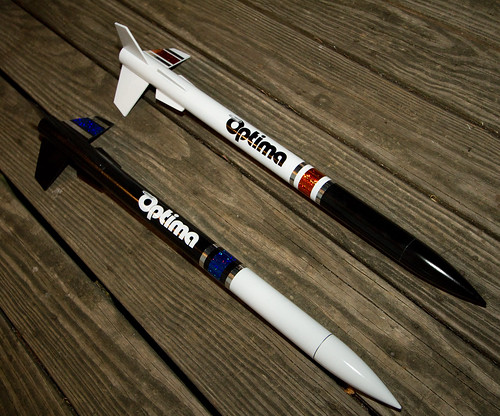 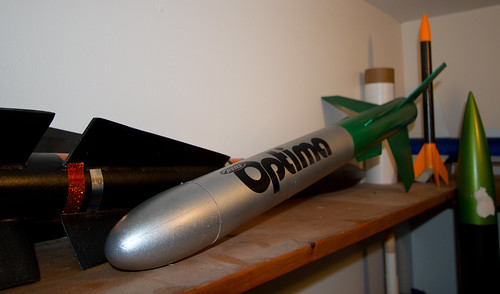 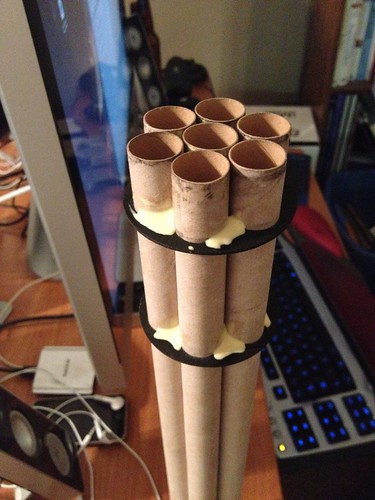 And then a NIB Optima, and NIB Shadow I'm also planning to build. And a SEMROC BT 50 version. Some day....a fiberglass one will be built.

I also have a thing for the Pheonix kit. 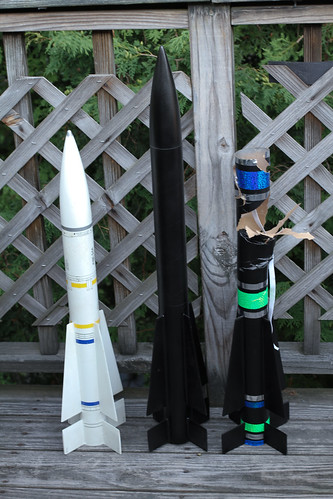 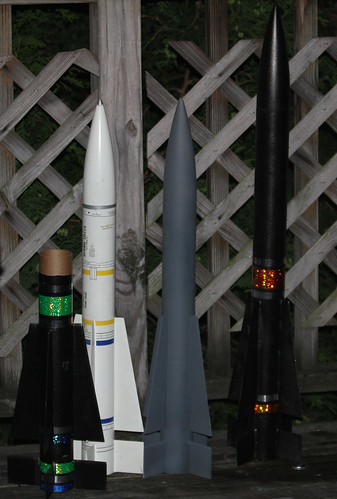 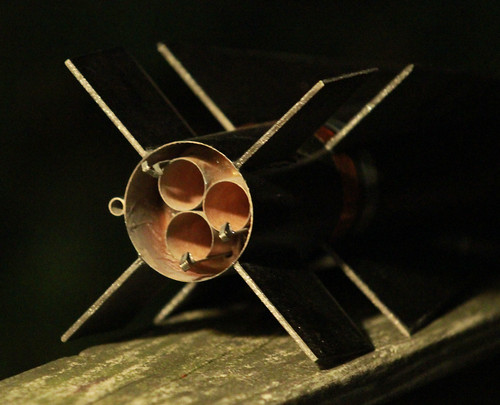 I built many many Javelins from Centuri

4 Crossfires because they tend to disappear.
2 Leviathans
2 Ventris
2 magicians.

So far I've only built replacements

Dr. Zooch Space Shuttle - at least 4 of them, only the first one stock

Mega Mosquito - about 5. Got a few and didn't paint them so I could lose them with E motors and not care. Hadn't lost a single one after making that decision.

I liked the Wildchild so much that I built the second one before flying the first one. Both get flown a lot.

Mushtang said:
Dr. Zooch Space Shuttle - at least 4 of them, only the first one stock

Mega Mosquito - about 5. Got a few and didn't paint them so I could lose them with E motors and not care. Hadn't lost a single one after making that decision.
Click to expand...

Mushtang said:
Dr. Zooch Space Shuttle - at least 4 of them, only the first one stock

Mega Mosquito - about 5. Got a few and didn't paint them so I could lose them with E motors and not care. Hadn't lost a single one after making that decision.
Click to expand...

Oooh, sorry to hear that. I meant lose because they went too high and floated away, got caught in a tree, powerline, etc. Didn't think about the E9 issue - but that's a definite thing.

George's post reminded me that I built so many Phoenixes back in the day for the Estes Built-Up Program (probably a couple of dozen) that I promised myself I wouldn't build any more. So far, so good on that, but I'm weakening...So many acres of balsa though...

I'm presuming cloning is OK... As such, I'd say a number of mine are rebuilds (even if the first wasn't retired).

Way back when, I received an Estes "Designers Special" for Christmas one year, so I didn't built a lot of kit models. In the last year though I've built two Baby Bertha's, two Big Daddy's, two Hi-Flyer's, and two Goblin's, all due to CATO or loss. I also have two Sprint XL's built and one still in kit form just because I really like them, and they were on sale.

I still have two Sky Dart kits, a Trajector that I need to finish soon as well as two more kits (the third one was supposed to be a Mammoth, but Estes messed up the order - not complaining though) because they were on sale :wink:. And I still want to upscale the Estes Guardian for mid-power.

Too many Saturn Vs!

hcmbanjo said:
Too many Saturn Vs!
Click to expand...

Is that even possible?

old thread but a fun one 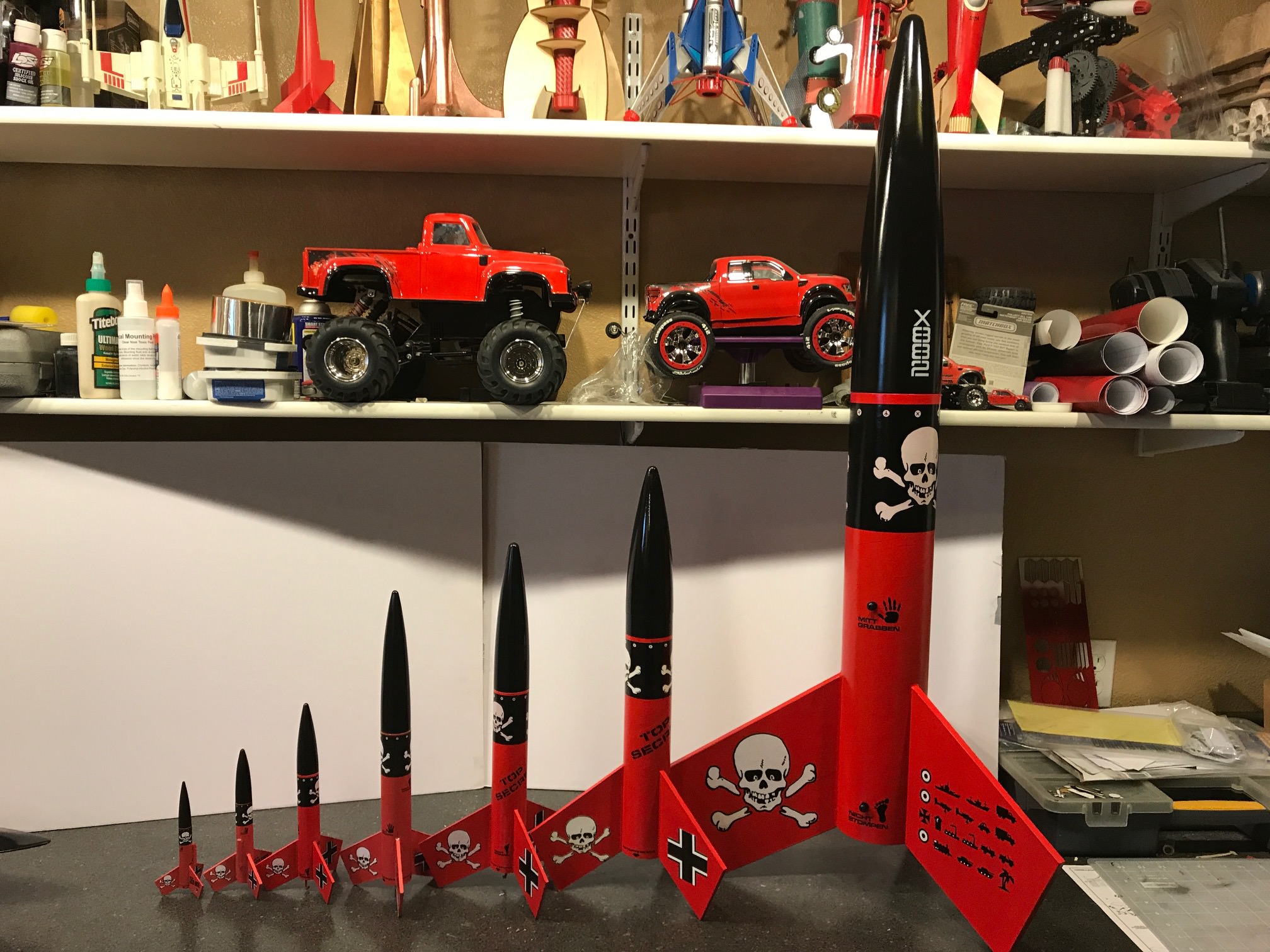 CoachSteve said:
old thread but a fun one
Click to expand...

That would be fun to see them all launched at the same time, drag race style. Or one after another.

I have built two Estes Sentinels, one an original I purchased decades ago, one I kit bashed from a Vagabond.
Now I'm building two upscale versions with 2.6" body tubes, about 43 inches tall. The original is a 1.6" body tube.
Top photo is the 2.6" version mocked up nothing glued together yet
Bottom is the 1.6" version . 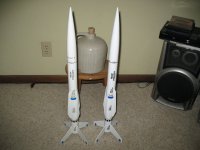 I think just two K-36 kits, unless you include scratch built clones, up scales and down scales.