Instructions And Discussion Of The Estes Scorpion (1333) Variants

The older variant, used a PRP-1H nosecone. That was split down the length of the nosecone, and it is glued together much like you'd glue the top and bottom (or left and right) sections of a model airplane's fuselage. The newer other uses the more familiar PNC-50Y (aka PNC-50YR) two-piece, injection molded nosecone where the aft shoulder glues inside the exposed portion of the cone.

There are other differences between the two. The older version's PRP-1G (PN 32493) fins have a diamond profile, where the leading edge and trailing edge are set at the same angle to each other (in opposite directions). The newer version's fin unit (no part number given) had a wedge shaped profile, and the trailing edge is at a 90 degree angle to the root edge.

Here's the first pages of the instructions of each version I've seen so far (older on the left): 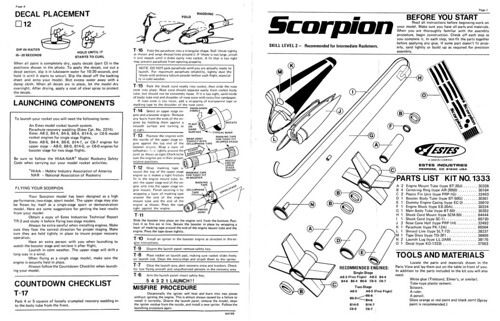 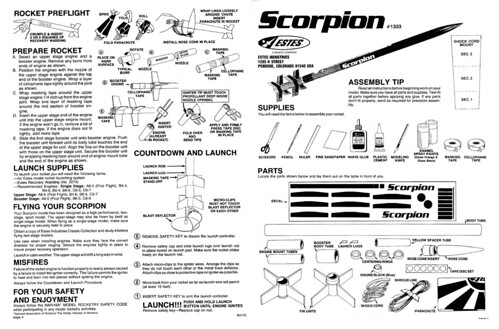 My suspicions make me believe that there may be as many as 3 other versions out there. These would focus around the changing of the nosecone from the PRP-1H nosecone to a PNC-50Y blow molded nosecone, and finally to the PNC-50YR injection molded nosecone. The other changes would be the evolution of the fin can from the PRP-1G to the fin can seen in the newer set of instructions.

Please, check your old instructions, and if you find a different version, please scan it and share.

Ok... In this image from SCIGS30's build, we can see that there's a shoulder on the inside of the fin can that will stop the Adapter rings and the motor tube from sliding through the fin can.

I've got some suspicions about it, but I'd appreciate it if someone could measure it for me.

Also, the fins were given as being 1.219" at the root edge, as was the fin can, but that gives an overlap of ~1mm between the booster and the sustainer due to the lengths of the other parts. I really need to know what the BT-50G body tubes' length is, and the fin can's length. I also need to know the shoulder's length, thickness, and diameter.

Basically, someone needs to get me that info before I release the .ork file.

Isn't the Scorpion just the original design of the Mongoose?

Kruegon said:
Isn't the Scorpion just the original design of the Mongoose?
Click to expand...

Yes, but it has evolved over time. The fin shape has changed, the nosecone has changed at least twice (more likely 3 times). Besides, I like the original profile and livery better.

So we "could" just buy a Mongoose and rework it into a Scorpion. Do we know which variant we'd actually be producing if we did so?

The Mongoose appears to match what I suspect is the final version of the Scorpion.

I have scans of the instructions (see the OP)

In the instructions (PN 84170), which I'm suspecting was how it appeared when it was discontinued in 1988, the fin unit is a wedge profiled, flat bottom affair (no part number given). Again, this is the fin unit that looks to match the Mongoose. The nosecone is recognisable as the PNC-50YR.

I'm using words like "suspect" and "chance" as I don't have the facts to state that this was how it was, with no room for questions. I'd love to be get a complete history on this kit.