How to Survive a Killer Asteroid

Nice description in the article of the hell on Earth experience way back then: 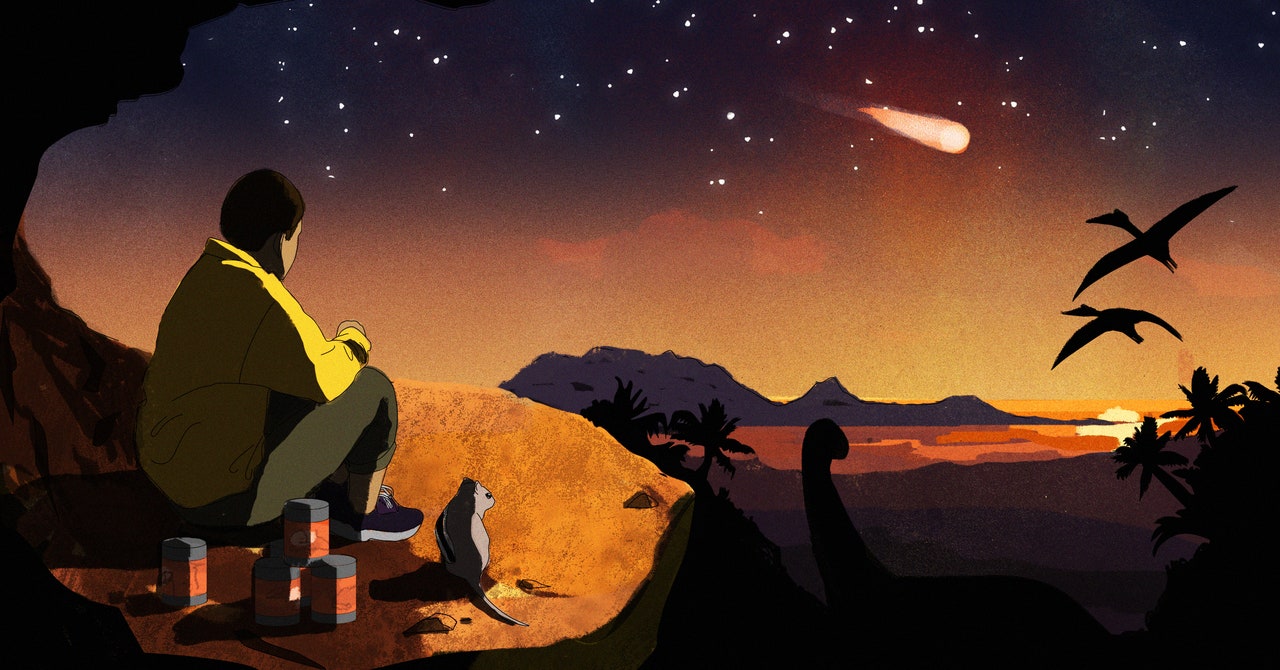 How to Survive a Killer Asteroid

The star won’t flash, flare up, or blaze across the horizon. It will appear as stationary and as twinkly as all the others. But look again a few hours later and you might think this new star seems a little brighter. Look again the next night and it will be the brightest star in the sky. Then it will outshine the planets. Then the moon. Then the sun [??? - W]. Then it will streak through the atmosphere, strike the earth, and unleash 100 million times more energy than the largest thermonuclear device ever detonated. You’ll want to pack up your tent before then. And maybe move to the other side of the planet.

If you make camp on the right continent, in the right environment, and you seek out the right kind of shelter, at the right altitudes, at the right times, you might stand a chance, says Charles Bardeen, a climate scientist at the National Center for Atmospheric Research who recently modeled the asteroid’s fallout for the Proceedings of National Academy of Sciences. Of course, even if you are on the opposite side of the world at the time of impact—which is the only way you can hope to make it out alive—he recommends you act quickly. As soon as you hear its sonic boom (don’t worry—you’ll be able to hear it from the other side of the world), get yourself to high ground and find underground shelter. Immediately.

You might think this sounds a bit alarmist. If you’re on the opposite side of the world—which you should be—why do you need to duck and cover from a city-sized rock landing 10,000 miles away? 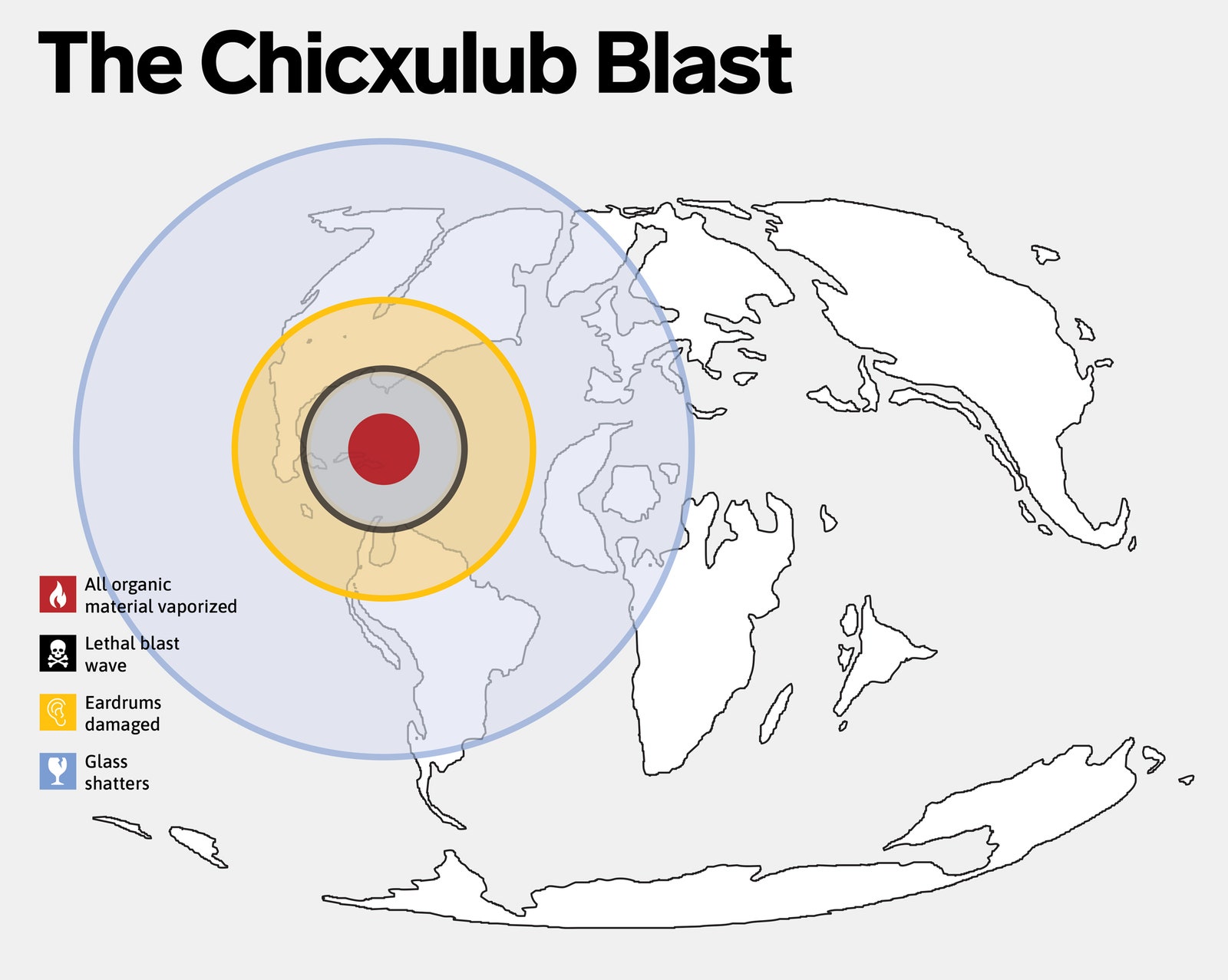 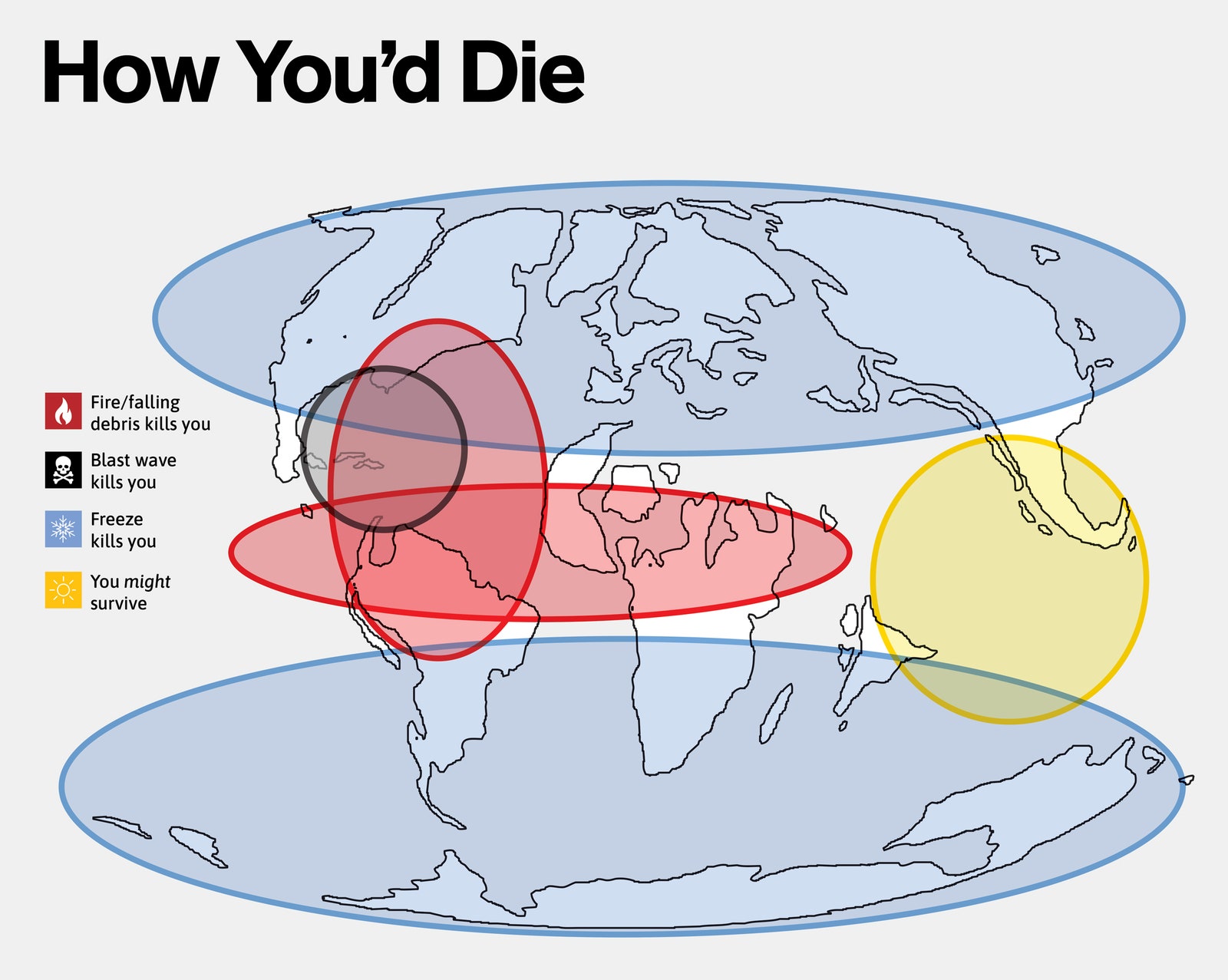 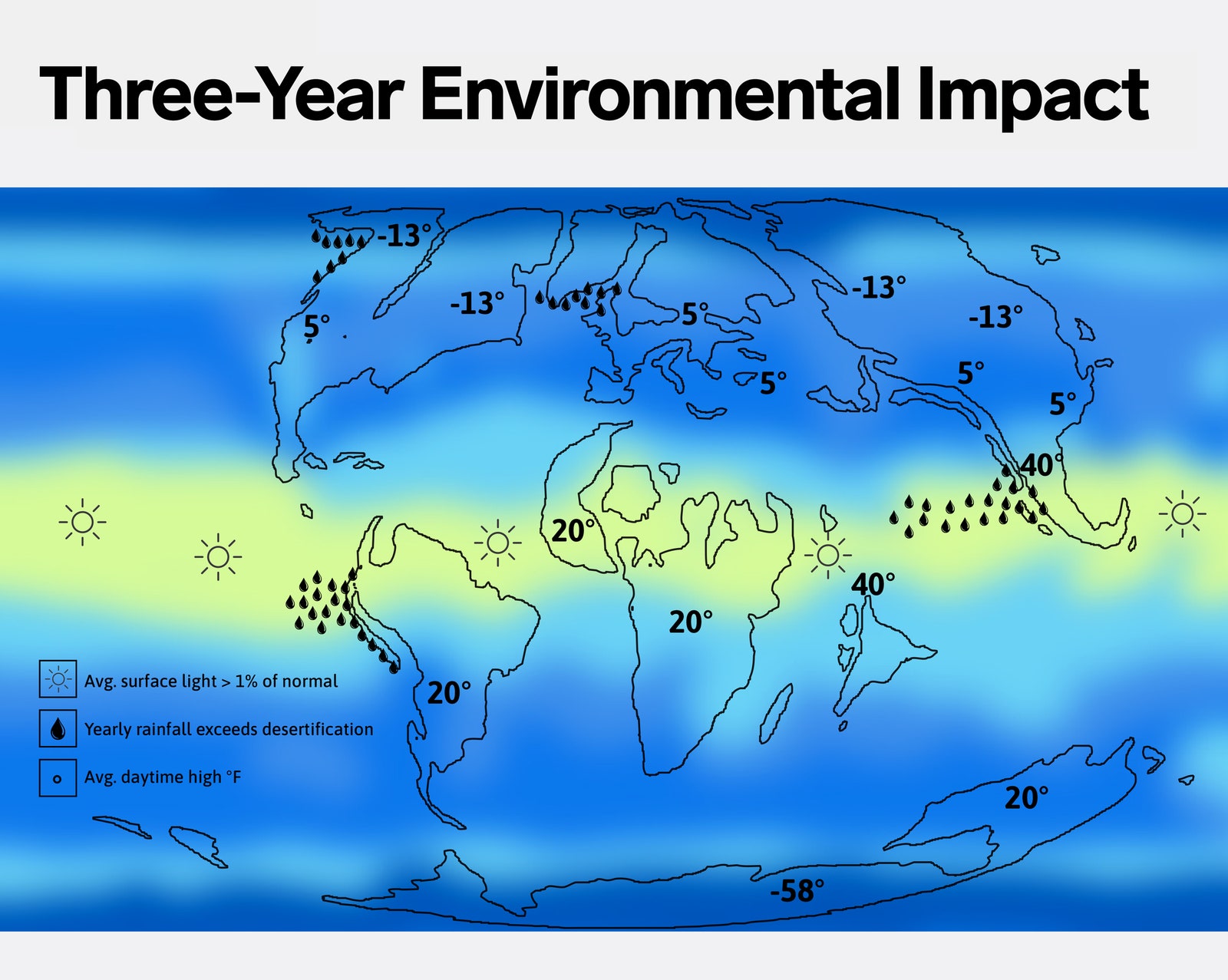 My sample of that event:

The incredible hardware and simulation capabilities of our national nuke labs' "stockpile stewardship" program provide the data needed to simulate on supercomputers current warheads, that requirement coming from the need to make certain that the aging of components and replacements of same don't affect warhead performance without the ability to actually test the refurbished warheads. Of course, with that capability probably comes the ability to simulate entirely new warheads with interesting characteristics. 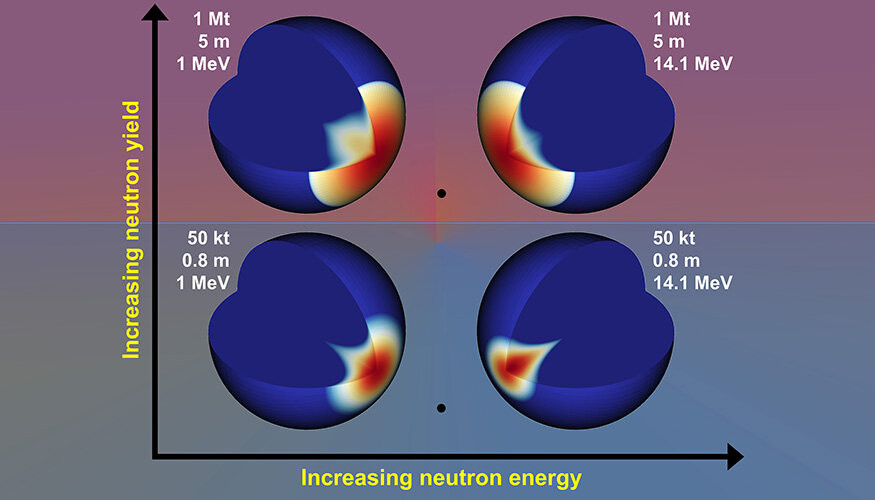 A research collaboration between Lawrence Livermore National Laboratory (LLNL) and the Air Force Institute of Technology (AFIT) investigates how the neutron energy output from a nuclear device detonation can affect the deflection of an asteroid.

A research collaboration between Lawrence Livermore National Laboratory (LLNL) and the Air Force Institute of Technology (AFIT) investigates how the neutron energy output from a nuclear device detonation can affect the deflection of an asteroid.

Scientists compared the resulting asteroid deflection from two different neutron energy sources, representative of fission and fusion neutrons, allowing for side-by-side comparisons. The goal was to understand which neutron energies released from a nuclear explosion are better for deflecting an asteroid and why, potentially paving the way for optimized deflection performance.

Horan said the research team focused on the neutron radiation from a nuclear detonation since neutrons can be more penetrative than X-rays.

"This means that a neutron yield can potentially heat greater amounts of asteroid surface material, and therefore be more effective for deflecting asteroids than an X-ray yield," he said.

Neutrons of different energies can interact with the same material through different interaction mechanisms. By changing the distribution and intensity of the deposited energy, the resulting asteroid deflection also can be affected.

The research shows that the energy deposition profiles—which map the spatial locations at and beneath the asteroid's curved surface, where energy is deposited in varying distributions—can be quite different between the two neutron energies that were compared in this work. When the deposited energy is distributed differently in the asteroid, this means that the melted/vaporized blow-off debris can change in amount and speed, which is what ultimately determines the asteroid's resulting velocity change.

Horan said there are two basic options in defeating an asteroid: disruption or deflection.

Disruption is the approach of imparting so much energy to the asteroid that it is robustly shattered into many fragments moving at extreme speeds.

"Past work found that more than 99.5 percent of the original asteroid's mass would miss the Earth," he said. "This disruption path would likely be considered if the warning time before an asteroid impact is short and/or the asteroid is relatively small."

Deflection is the gentler approach, which involves imparting a smaller amount of energy to the asteroid, keeping the object intact and pushing it onto a slightly different orbit with a slightly changed speed.

"Over time, with many years prior to impact, even a miniscule velocity change could add up to an Earth-missing distance," Horan said. "Deflection might generally be preferred as the safer and more 'elegant' option, if we have sufficient warning time to enact this sort of response. This is why our work focused on deflection."

"One ultimate goal would be to determine the optimal neutron energy spectrum, the spread of neutron energy outputs that deposit their energies in the most ideal way to maximize the resulting velocity change or deflection," he said. "This paper reveals that the specific neutron energy output can impact the asteroid deflection performance, and why this occurs, serving as a stepping stone toward the larger goal."

"It is important that we further research and understand all asteroid mitigation technologies in order to maximize the tools in our toolkit," Horan said. "In certain scenarios, using a nuclear device to deflect an asteroid would come with several advantages over non-nuclear alternatives. In fact, if the warning time is short and/or the incident asteroid is large, a nuclear explosive might be our only practical option for deflection and/or disruption."

Why Alien Life Will Be Robotic

How Astronomers Missed the Massive Asteroid That Just Whizzed Past Earth

INCREDIBLE fossil find from the day the dinosaurs died

Where are all the aliens?