How many RG's can I make from a Cosmic Interceptor Kit?

This thread is to summarize a few brainstorms I had on using the Cosmic Interceptor kit to kitbash some rocket gliders and one based on the trident....

Yesterday afternoon, i found I had two spare servos, some extensions and a receiver laying around without a home, I also had two 2" estes white tubes and a coupler. I borrowed an interceptor cone from one of my other models and got to doodling. I basically grabbed an F-4 phantom wing, with some side plates to mimick engine intakes, took the tail from my Arc-light, used my template for the SST to trim the rear at an angle. Drew it up and did some initial CG calculations, moved the wing foward till the CG was right at the coupler joint since I knew my component/cone/motor weight usually averaged out at that point in the model. Drew it up on a napkin at 3:00. Got home at 5 and started cutting using some of the curved foam sheets I have sitting around, put some carbon in spots to help straighten/stiffen it.

For the wingtips I just cut a V groove and pulled them up and glued them in place after sanding the edges round.

Mounted the wing on the bottom of the tube, installed the tail and motor mount and did some indoor confirmation of the CG location. Installed electronics and had it ready to go by 9pm. Turned out I needed 1/4 ounce of tail weight, so I could have pushed the wing forward just a tad but it's pretty darn close to perfect.

Flew it this morning and it was great. Wing loading is similar to my deltas, boost needed just a hair of down trim, glide was spot on about 1/4" up trim. Really beautiful, nice thick smoke trail this morning with pure blue sky, glide took very little control input for turns, I came on approach at around 100 feet at the end of the runway and it just settled hands off till just before flare. Really nice. I was easily getting over 1 minute glide time in dead air.

Thinking about a navy scheme similar to my F-4 sageburner colors...

Here she is with some vinyl, will do panel lines and some detailing later tonight.

Here she is with the panel lines all finished up ready to do SAM supression...

Another good looking bird! Frank, if you keep going, you are going to cause a shortage of Interceptor E nose cones...

I think the flat bottom models with no profile fuselage below the planform and radio parts not out in the breeze end up with noticeably less intersection drag losses and parasitic drag. If you do a minimal fuselage on top of the wing and keep it very light, keep as much of the hardware inside as possible, it will give better performance. Noticed this on my little Black Horse model.

Going to do something similar to the BH for 24mm loads. It will be more or less based on the old NCR Avatar molded foam shuttle and will try to keep good thrust to weight numbers and a low wing loading to go with the reduced drag.

I'm trying to help John Boren use up all those cosmic interceptor kits..

Here is something sandman asked me about, basically an inversion of the IronHand...wing on top, intakes on the bottom, change the tail and voila, Arrow....ish. I did have to redraw the wing to get my CG to come out right and the intakes to be longer and to have it look better, but not a bad mornings work. I need to add panel lines to finish it and I've run out of radio equipment.....so no test flights, but I did confirm my indoor glide cg.

Actually was torn between the phantom-ish planform and the arrow, then decided to do both.

The Interceptor nose cone would make a cool MIG 25, if you want to build a Bad Guy companion.

Lest we forget our friends across the pond, a Mirage IV is close at hand.

A Vigilante with the wing tips folded up? GO NAVY!

Sigh, I'll never get any sleep at this rate I'm already ordering Cosmic Interceptors by the crate...MUST.....STOP....THINKING.....ABOUT......Airplanes...

Add some rear pods for a Tu-22. This would be a cool drag race!

burkefj said:
Sigh, I'll never get any sleep at this rate I'm already ordering Cosmic Interceptors by the crate...MUST.....STOP....THINKING.....ABOUT......Airplanes...
Click to expand...

NEVER! Once airplane rockets enter the brain there is no stopping the mindsims!

Could an ekranoplan be made to glide? Use the forward mounds as canards. For nose weight, load the ends of the C6-0's with lead shot and eject them. Will be expensive as testing would have to occur over the Caspian Sea, just like the actual Sea Monster.

Here's the arrow with panel lines finished up and ready to fly, 11 5/8 ounce ready to go. I also made a logo for IronHand stealing the SAC logo, printing it out like I did the canadian roundel, covering with packing tape and applying using spray on contact cement.

Holy cow!
Very nice, and in such a short span of time, which is most interesting!!!

burkefj said:
Here's the arrow with panel lines finished up and ready to fly, 11 5/8 ounce ready to go. I also made a logo for IronHand stealing the SAC logo, printing it out like I did the canadian roundel, covering with packing tape and applying using spray on contact cement.
Click to expand...

You know, with some well placed bribe money we could get all these projects canceled and replaced with BOMARCS, Star fighters and Voodoos! Heck, they could even re- engine the F4 and make it work. Oh the sad history of those days.:sigh: The good news is we can once again see the Arrow and TSR flying high!

Had thought about the TSR-2.

Ones on my current short list for military-ish aircraft, both actual and proposed:

Modified my profile kit templates a bit to gin up a Delta-Dart flavored version using the Interceptor cone/tubes. Did some in house glide tests to confirm cg calculation, then maidened it in about 10mph winds yesterday, handled it really well, hovering for the most part in the head wind, then needed some push forward to keep the nose down on landing so it would penetrate to a landing and not baloon up. 12 oz rtf, needed just a bit of nose weight on this one due to the more forward CG due to wing shape and placement. Did a little bit different nose painting/cockpit to match.

Cool. Maybe one of these in the future? Republic F-105 Thunder Chief.

At this rate you will soon empty the warehouse of Cosmic explorer kits!

The thunderchief has a fairly small wing, I've done a profile RCRG version that I mostly fly as a pusher, as the glide is pretty minimal, same for the Voodoo, But I appreciate the suggestions

What about this? I modified my original profile kit wing with the interceptor fuse, I don't think it looks too bad, about the same weight, uses much less foam..In order to make CG and due to the wing slotting I couldn't reasonably stretch the strakes all the way forward.

burkefj said:
What about this? I modified my original profile kit wing with the interceptor fuse, I don't think it looks too bad, about the same weight, uses much less foam..In order to make CG and due to the wing slotting I couldn't reasonably stretch the strakes all the way forward.
Click to expand...

You have definitely discovered the universal rocket glider nosecone that works for everything!

Totally....it's sort of like bacon....everything is better with an interceptor nose cone


tab28682 said:
You have definitely discovered the universal rocket glider nosecone that works for everything!
Click to expand...

Flights this morning were pretty good, it was a bit twitchy off the rail as I had started slightly tail heavy, then added a bit of weight to the nose a little at a time till it was very stable on boost but not sluggish on glide pitch. Glide was not bad, it was quite windy and it handled it fine. I think I'll call it "Archangel" since that was the initial codename for the A-12 if you can believe anything written on the internet. I've painted it flat black, so far, need to do some panel lines and talk to Mark about some vinyl. 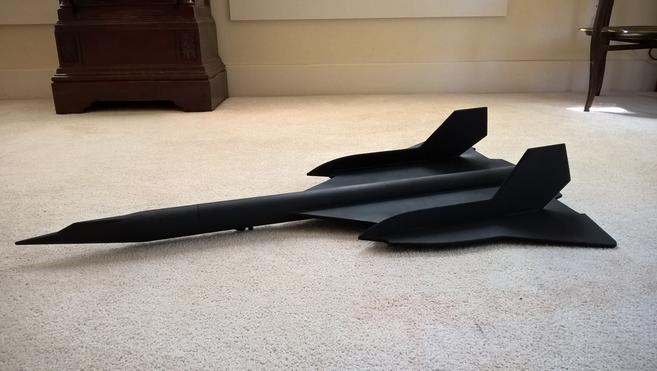 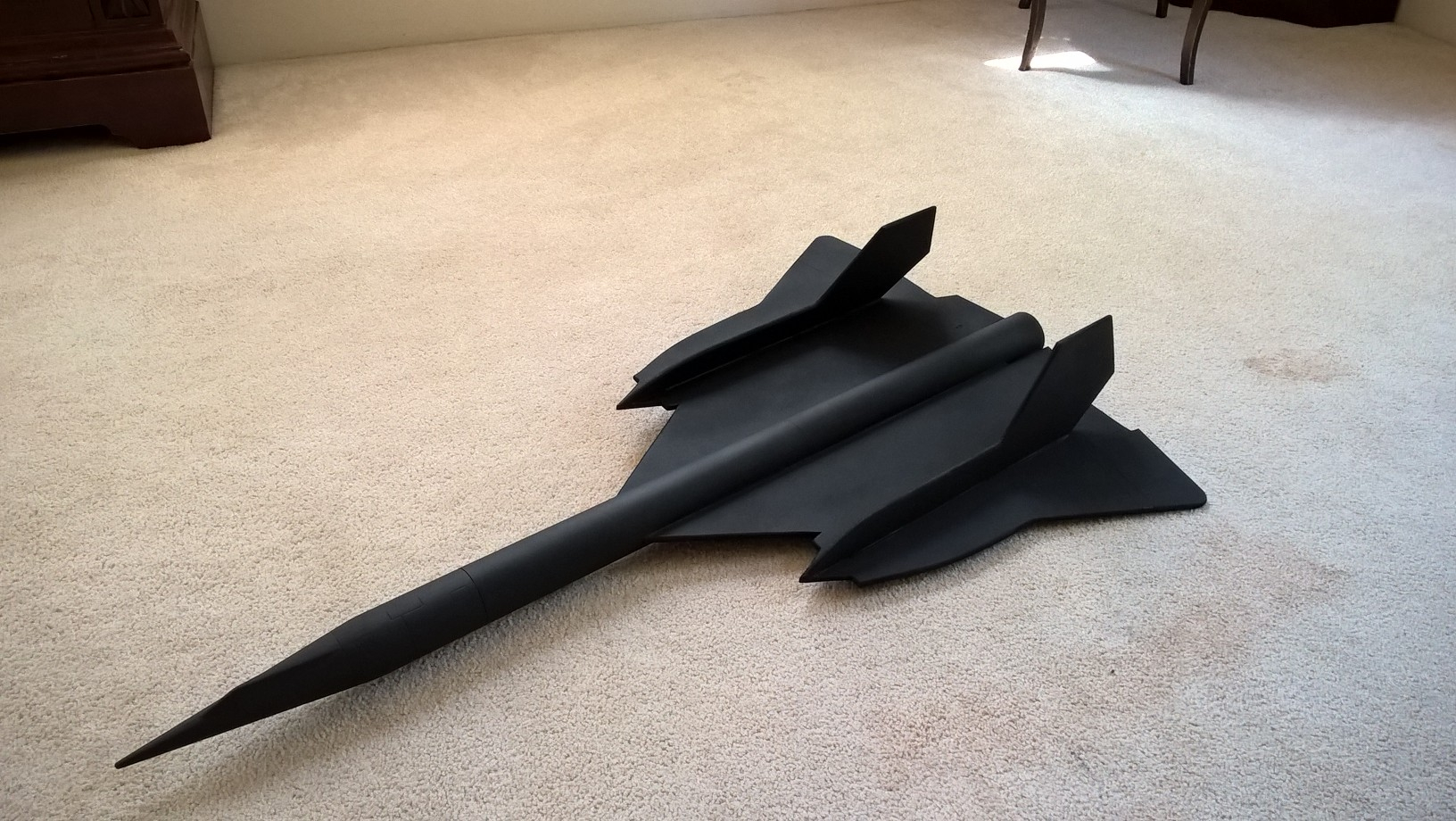