I'm new around here, so I thought I'd post some of my homebuild rockets. All are a result of getting an Estes Designer special for Christmas last year and a demo of RockSim. One or two of them are interesting enough to post a thread on. I try to do things a little different and try new approaches.

The first thing I tried was a 2-stage 13mm rocket. After I build the thing, I soon discovered that there are no 13mm booster motors in production. (but they're in RockSim...go figure:bang Well, what to do with this thing then? My idea, strap the booster to the sustainer with a shock cord amd glue in the nose cone. A small bit of wadding to protect the cord nestled in, and Voila! I've created "Aft Separation®"

The "Neutron" is born. 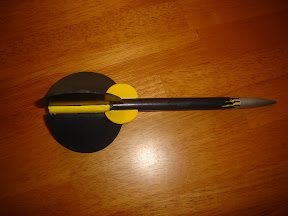 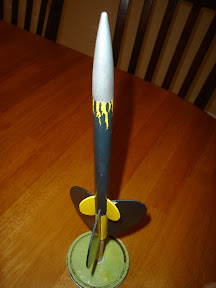 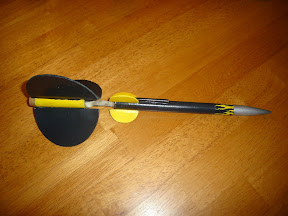 It flew well for a while, but after three or four fin repairs and several shock cord replacements, I decided to retire her. I might upscale it and do a true stage configuration.

Thanks! I thought the nested circular fins were a neat touch. It looked cool in RockSim.