Help with Servos for Rocketry Applications

I don't have previous experience using small servos. I'm learning and gaining an appreciation of what they can do. I have two major applications. The first is small control surfaces on a HP rocket. The second is servos on a TVC gimbal mount for a low to mid-power rocket, up to 38 mm H-impulse, I hope. For this thread, I would like to focus on servos for TVC gimbals.

So, I have a couple makes of small servos (often referred to as micro servos) for a 29 mm TVC gimbal and I would like some guidance (pun intended) on what I should be looking for on servo specs and maybe tips on the best manufacturers. Actually, if I had a recommended manufacturer that would help a great deal. Eventually, I would like to create a 38 mm TVC gimbal after gaining some experience with the 29 mm mount.

Basically, I see two types of construction for these small servos; plastic and metal gears (photo). These are both 90 degree servos. 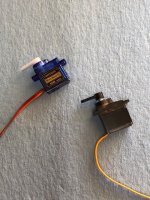 I have two servos (X & Y axis) supplied with a BPS Space Signal R2 kit that are plastic gear type manufactured by Osoyoo, SG90.
I found the following specs for these servos:
Operating Speed: 0.3 sec/60 degrees (voltage not given)
Stall Torque: 1.5 Kg/cm
Voltage: 4.2 to 6 volt
When I check them with a Hiwonder servo tester, they seem a bit "noisy." These are installed in a test stand to check if the TVC mount will be OK using a CTI G33 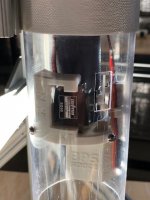 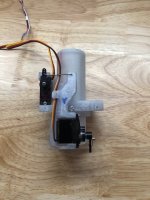 I see many different listings for servos using Amazon and prices vary a lot.
What do you think is best?
Should I be testing these servos in a different way?
I would appreciate your thoughts on this.

MKS makes some great servos. You get what you pay for, they're not cheap. But they have metal gears, machined aluminum cases and high quality electronics.

This is what I would be inclined to use-

Thank you watheyak!
Is the accuracy and precision of servos represented in any of the specs? Speed and power are there, but it seems there are important details missing when I see the info for servos. For example, if I would like the TVC gimbal on one of the axis to move to 0.5 degrees accurately, and move back to neutral and do this kind of thing perhaps many times, would there be something in particular to compare in the specs for servos? Or, is the controller the most important thing for this?

I that would be a function of the pot in the servo. The higher quality the pot, the higher the accuracy.

What you're asking it to do along with the accuracy is pretty basic. It needs to do that in an R/C plane all the time. Especially when you start to look at applications with active stability where there are many small movements over the course of one second, say on a rudder or a tail rotor.

While those stats may not be measured or available, the MKS servos are going to be some of the best in that area.

Plus, it's only as accurate is your linkage. Any slop there and even the best servo wont matter.
R

watheyak said:
This is what I would be inclined to use-
MKS Servos USA :: Wing Servo :: DS65K
Click to expand...

Purchased two. Thank you.
I created a way to test small electric motors for accuracy and precision of turning. These were purchased through eBay for a couple projects. That's when I came to the conclusion that approach would not work and only servos would do. You must have accurate feedback on positioning. So, now, I would like to create a set-up to test the new servos with other ones; you know, the cheap ones.


watheyak said:
Plus, it's only as accurate is your linkage. Any slop there and even the best servo wont matter.
Click to expand...

MKS do make good servos from my experience.

Yes, you don't want any backlash in the linkages and geartrain if it can be helped. It makes it like trying to drive a car with a loose steering wheel. Not good for a control system.

The other thing you want is a fast servo. You want to minimise your "transport time", the time between the error being generated and the plant getting acted upon by the feedback. This will reduce your chances of oscillatory behaviour and allow you to have higher gains, resulting in a faster and more precise control system. You mentioned two servos. One was 300ms for 60deg, the other was 100ms. Choose the faster one. Your control system will thank you .

Cool! Excited to see how your testing goes.

My perspective here is as an EE with some class and lab experience in feedback control systems, but no experience with these mini servo units. So decide for yourself what flavor of salt and how many grains to take the following with.

The accuracy and repeatability of the servos is of surprisingly little importance (but not none). The reason for this is that a good control system is using feedback from the rocket's actual attitude and attitude rates. When you need to adjust the attitude in a given direction, you should be commanding the servos a little this way or that from wherever they are; if your algorithm says "for attitude X put the servos in position Y" then it will probably fail anyway. This is not to say that accuracy and repeatability don't matter at all, just that they don't matter much.

And that raises another point. If you can get one you want a servo that reports its position back to you. It might even be worth adding your own position feedback, but that is adding a layer of complexity to the design which is probably not really necessary, even though it could help.

There is one rating you'd like to see that is not listed above: the current requirement. you need this to size your battery.

The BPS TVC system is designed for LP motors only, and low speed. To upsize it you're likely to need a more capable and tougher servo. You'll need the higher speed, as OverTheTop advised, and you'll need enough available torque to go that fast against the inertia of the larger 38 mm motors and mount, and you need gears that can hold up to providing that torque. Not all plastic gears are bad, but unless you know what kind are in these units, and how they stand up to repeated applications of the maximum torque, I'd go with metal gears.

And I'll repeat and emphasize the importance of taking play and lash out of your mechanical system, including getting a spec for it on your servos if you can. Nearly all "starter" control theory is based on linear systems, and nothing is more nonlinear than play. It's worse than the loose steering in a car, because a driver uses an adaptive control algorithm that is not limited to linear systems; our brains are much more sophisticated than your TVC is going to be.

Digital servos - the "digital" is internal to the servo related to motor control - the PWM control method from the RX or microcontroller is the same. Supposedly these are more accurate which makes sense from their theory of operation:

The Difference between Analog and Digital RC Servos
January 21, 2020 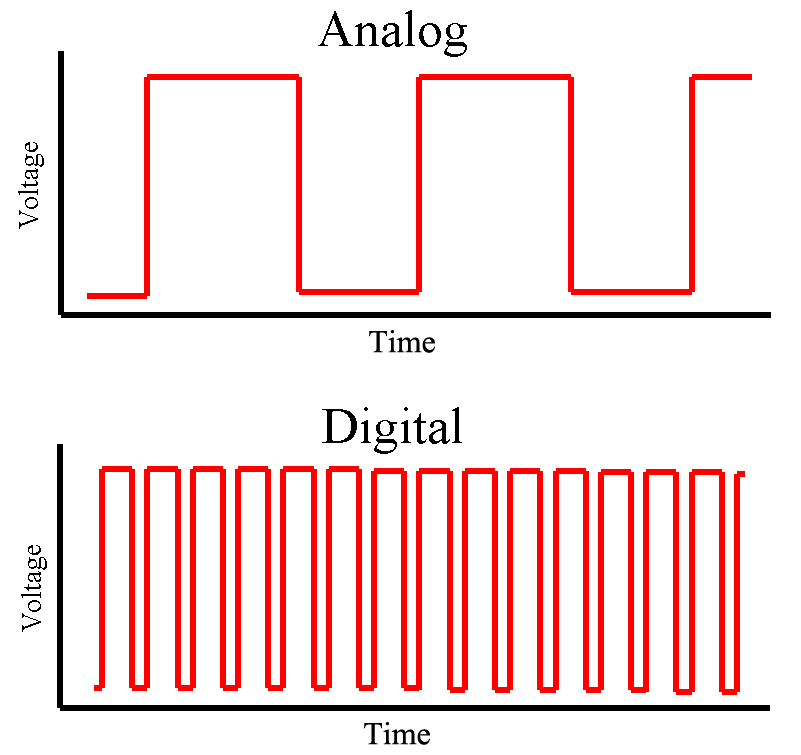 The Difference between Analog and Digital RC Servos -

The circuit board in an analog servo converts a receiver signal to a power signal for the servo motor. The frequency at which the output occurs is 50hz.

jqavins said:
The accuracy and repeatability of the servos is of surprisingly little importance (but not none). The reason for this is that a good control system is using feedback from the rocket's actual attitude and attitude rates. When you need to adjust the attitude in a given direction, you should be commanding the servos a little this way or that from wherever they are; if your algorithm says "for attitude X put the servos in position Y" then it will probably fail anyway. This is not to say that accuracy and repeatability don't matter at all, just that they don't matter much.
Click to expand...

OK, thank you Joe. It's going to take me some time to understand what I'll need for a control system. With a lot of help.

Thank you for this link! Wondering how important the higher stall torque of the digital servos will be. Seems longer motors say 6 grain would create a lot of turning force on a TVC mount that was on the forward end of the motor. And, there would be a point where you would want to switch to thrust vanes for longer motors. Does this make sense?
I received the two MKS servos I ordered today. The stall torque is similar to the metal geared TowerPro MG90D, but, the MKS are much smaller. They will work great to control the small surfaces I have for one of my projects.

Here's a photo showing the set-up I made to check the small motors I originally got from eBay. These are cool motors because they have a lot of toque (they are geared 500:1). But, like I said before, they can not be controlled adequately. I just didn't understand the importance of servos when I started these projects. Anyway, I would like to create a similar set-up to compare the various servos I have now.

AS far as your testing goes, Hitech makes a servo tester, does both analog and digital.
R

David Schwantz said:
AS far as your testing goes, Hitech makes a servo tester, does both analog and digital.
Click to expand...

Here's the tester I ordered to test the first group of servos I obtained: