AlexBruccoleri said:
This is fantastic. One question. What do you mean by trapezoidal fins? Your shape actually looks fairly optimal in that it pushes the CP back with as little area as possible.

Yeah, this fin shape ended up giving me similar performance, and it should be stronger for the fins (especially with a through-the-wall into the tailcone) 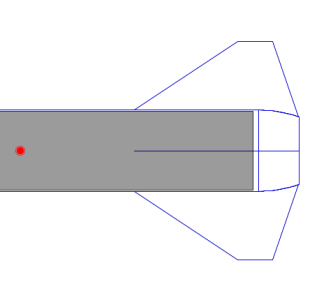 Nm, missed the above post.
I picked up a H13 also in hopes of snagging the local H altitude record. Good job on the quick build and record flight.

GalantVR41062 said:
Looking to back cut the fin (Dx3 or similar), probably to help prevent damage on landing. A altitude attempt needs to be recovered in flyable condition.
Click to expand...

That's awesome! Great report on your flight! Are you with UROC? I would have loved to been at URNUTS but I was only able to make it to balls the previous week
Ken

Looking at the video, I wouldn't blame the tower. It came out of it vertically with no tilt angular rates that I could see. It looks like the tilting only started when it was about 2 tower lengths above the ground. To me it looks like a small misalignment between the thrust of the motor and the CG. A trick I used on my altitude attempts was to roll the rocket on a level table and adjust the CG axially until it rolled uniformly. But if the rocket thrust is misaligned coming out of the motor at first because of specifics of the grain geometry, the only way you're going to beat that is with bigger fins and a longer tower.

U
Kraft/paper tubes for Level 1 cert?

Tis But a Scratch