My Gorilla Glue "Snot Rocket" recently made its first flight!

The idea was simple - I was changing a caulk tube in my caulk gun one day and thought the business end looked like a ram-jet. From that moment, I knew I had to see one fly. I headed to Lowe's looking for a tube that had a screw on/off nozzle, and a cool-looking easily-recognizable label/brand. Gorilla glue won that source selection hands-down.

I drew up the fin can in Fusion 360 (my first fin can). That was last year before I had my own printer, so a friend printed it for me. We used PLA and so far, it has one flight under it's belt with no problems. The fins and walls of the can are 2mm thick.

The plastic caulk tube is HDPE. Not many adhesives will adhere to it so I chose rail buttons instead of gluing on a launch lug. I also put one of the rail buttons through the shoulder of the fin can and the caulk tube to hold them together - along with epoxy, of course. The HDPE tube was scuffed and scored, as well.

I made a coupler for the nosecone shoulder by slicing a section out of a slightly too-large coupler, and using that section to glue back inside and hold it together. The coupler was epoxied into the scuffed and scored HDPE nosecone.

I chose a caulk tube with a screw on/off nozzle for two reasons. First, I could take it off, drill two holes beneath it and have an anchor point for the Kevlar shock cord. Second, I could add bullets, as required, inside the nozzle for nose weight. My reloading bench is beside the rocket table in the basement so two .44 mag solid lead bullets from my Cowboy action loads, and one .32 S&W cast lead bullet fit the space and weight requirement perfectly. Locktite was used to secure the nozzle tip.

I simulated everything in RockSim, and double-checked it on www.unm.edu/~tbeach/flashstuff/RocketAltitudeFixedSize.html.

It flew on a D12-5 with a Rocketman 4 line TARC chute with a chute protector and a Jolly Logic Chute Release. I always fly a Jolly Logic AltimeterThree as well, but it was too windy to risk a tree: 17 MPH sustained winds. I was willing to risk the cost of the chute release because that is exactly what it is designed for, but I chickened out on adding more money to the rocket on that particular day. I usually set the chute release for 300 feet, but on this day I set it at 200', and it was a perfect flight in every way. I'm looking forward to future flights with E motors and the AltimeterThree on board.

I should mention this is using the "normal" 9 ounce caulk tube. Who's going to upscale it using the contractor 30 ounce tubes? I know I will, but it's at the bottom of the build pile below some other ideas floating around my brain and rocket table, so it'll be a while.

No kidding! I think my next scratch build is going to have to use a similar finishing method. LOL! The only use of sandpaper on this build was to scuff the tube for the epoxy.

Lol I love this! Very silly too! Gorilla Glue should sponsor you! Also kind of reminds me of a tank round

Yes, it does! That’s the M829 depleted Uranium penetrator round. I’ve thought about modeling the 120mm mortar rounds or the M1 main gun rounds, but have never tried it.

Someone in a Facebook group asked for the .stl file for the fincan so here it is.

And as an update over 18 months later, the Gorilla Glue rocket has flown 5-10 times. All have been fantastic flights with zero damage.

If you had dribbled some glue out of the tip then it really would have looked like.....
Never mind.

Cool, but have questions (Just Curious) ... What caused the model to have all those non-manifold artifacts? , and it is not orientated correctly for printing. See screen shot after importing the file into Tinkercad, and rotating it for printing... Imported into slicer as downloaded, second screen shot...

beeblebrox said:
Cool, but have questions (Just Curious) ... What caused the model to have all those non-manifold artifacts? , and it is not orientated correctly for printing. See screen shot after importing the file into Tinkercad, and rotating it for printing... Imported into slicer as downloaded, second screen shot...
Click to expand...

I don't know what caused the artifacts. This fincan was the first or second thing (search the forum for my son's Chocolate Rocket with Hershey Kiss nosecone - don't remember which was first) I modeled in Fusion 360 back in January of 2019 before I bought my own 3D printer. It was a learning experience, for sure. A friend sliced it and printed it for me. That convinced me to buy a printer. I had wanted one for a while, but that pushed me off the fence. I like to think I've learned a few things since this effort.

I exported it as an .stl yesterday to post it for a guy who asked for it. I originally shared it with my friend for printing as a .f3d file since he uses Fusion also.

Incidentally, I still model everything in that orientation in Fusion 360, and always flip it 90 degrees when I get it in my slicer. It's just how my brain likes to see things in Fusion, and since I spend more time there drawing/designing, and less time in the slicer preparing to print, that's how I do it.

Why do you think it's better to slice and print in that odd orientation?
Every fin will be different?

FredA said:
Why do you think it's better to slice and print in that odd orientation?
Every fin will be different?
Click to expand...

I don't slice and print in that orientation. That is the default orientation in Fusion 360. The first thing I do when I open files in my slicer is to flip things 90 degrees to the orientation I want to print in.

OK - misunderstood which screen was what - got it.
Thanks for the clarification - thought I was missing some trick.
I know some of the resin printers print higher quality if you keep things angled, but for a fincan it's more about strength - but symmetrical strength. You wouldn't want to put out a bunch of fins all "tuned" to resonate a different rates.
You print them the way I print mine.
Thx again.

My system for fincan/fins is to make the parts separate. One piece units seem to be more of a pain to get strong enough. Generally now after trial and error. I print the fins in vase mode with zero bottom layers and at least three top layers unless the fin tip is not parallel with the root, then more layers to seal it. I use a 0.6mm nozzle and 0.25mm layer height for a little thicker walls. This results in a nice outer shape and finish. Next step (Note fin cross section designed to not be too thick) I fill the cavity in the fins with thin castable epoxy. Super Strong. For HPR fins, a piece of G10 Fiberglass sheet can be inserted before the epoxy as a strengthener. I use System Three Silvertip epoxy. Others will work too. West Systems, Tap Etc. (Bob Smith epoxy is too viscous to flow into thin cavities...) I got the initial idea from a user on Thingiverse Leo_N who posted a nice fin can, fins and nose cones for a Nike Smoke (BT-55). The fin can has slots in it the shape of the fin root for perfect alignment. Fins are bonded into the fin can with 3D-Gloop. Note: This type fin is not suitable for anything expected to go supersonic... Although I will have to at least try for just over Mach 1, just because... The problem with that is I never seem to find tiny ripper rockets after flight.

I've done similar - use a small piece of CF plate inserted into slots in the fins and epoxied in place.

I can't tell you how many times I've looked at caulk tubes and that that I should make one into a rocket. Well done, sir.

Do you find Honey Nut Cheerios boxes to be especially good? I may have a Raisin Bran box available, but I don't want to find I've used something less than optimal.

jqavins said:
I can't tell you how many times I've looked at caulk tubes and that that I should make one into a rocket.
Click to expand...

jqavins said:
Do you find Honey Nut Cheerios boxes to be especially good? I may have a Raisin Bran box available, but I don't want to find I've used something less than optimal.
Click to expand...

Oh yes, Honey Nut Cheerio boxes are far superior to every other cereal packaging material. They’re the best. Nothing else comes close. Terrific. Believe me when I tell you nothing compares. Fantastic.

Culprit said:
Oh yes, Honey Nut Cheerio boxes are far superior to every other cereal packaging material. They’re the best. Nothing else comes close. Terrific. Believe me when I tell you nothing compares. Fantastic. 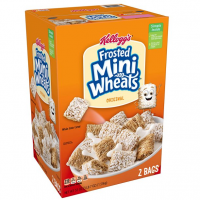