Thought I would share my FSI Viking. I love the way it looks and flies. One of my first kits too.

NOTE: the rocket in this particular post is the BMS clone of the Viking 1

Here is my (BMS clone of) FSI Viking I:

Here is my upscaled Viking II:

The upscale is based on the BT-70H tube & associated parts available from Semroc. I based the paint job on the illustration on the "classic" Viking II instruction sheet. Eventually I'll make the "decal".

Funny. I was just going to look for a Viking gallery.:wink: No originals, but lately I'm loaded with Vikings of one kind or another.

This is my Viking 2 upscale, inspired by Stefan's, but a BT-60 to his BT-70. Unflown at the moment, but the corn is almost ready to cooperate. I think it'll fly on an E9-4 when the time comes.

My Viking 3 was going to be a 24mm bird, but I had a gluing issue while installing an engine block. Kinda killed my enthusiasm for the project, but I'm almost over the disappointment, so painting should follow shortly.

No Viking 4, YET! But I expect the package to arrive tomorrow.

This is the Viking 5 CATOing at NARAM.

Lots of internal scorching, a broken shock cord, both launch lugs ripped off, and the motor mount was ripped loose. Currently under repair and still awaiting a first flight.

Finally, this is my Viking 6, my vision of where the Viking line may have logically gone to if things had been different. It'll be E-powered, and done in colors as yet to be determined. 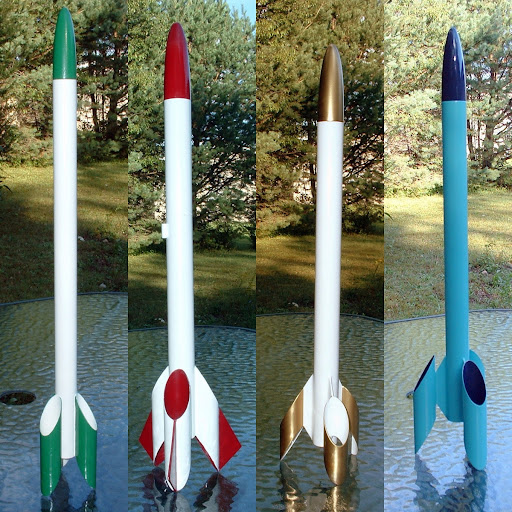 I'm going to be working on a "slight upscale" (based on a 24mm motor mount tube) of the Viking III next.

Actually, I'll be working on in parallel:

I already have a 24mm Viking II and the BMS Viking I, but I've had these part collections set aside for years and I want to get them built and out of the way. I may put the models up for auction or use them as gifts.

I intend to make the fins / mounting stubs "through the wall," with permanent 18mm motor mounts.

It would be hard to make a properly scaled Viking IV to accompany the 24mm Vikings. You'd need a 1.27" OD tube.

StefanJ said:
It would be hard to make a properly scaled Viking IV to accompany the 24mm Vikings. You'd need a 1.27" OD tube.
Click to expand...

The way I figure it, they didn't seem to mind fudging a bit on tolerances here and there, so I won't mind either.

I keep forgetting that you CAN get FSI-equivalent toobs from Semroc. Probably cones and transitions as well. So you could make same-size clones of not only the Vikings but the Sprint, Nova, and Orbit.

These all would fly just fine on 18mm motors.

How many different versions of the FSI Viking are there? Very nice looking rockets guys.

KHamel said:
How many different versions of the FSI Viking are there? Very nice looking rockets guys.
Click to expand...

FSI released five different models in the series. Early on in the company's history (around 1968), FSI released Vikings I to IV (shown in my photo). They eventually produced the the Viking V about 20 years later. I suspect that the FSI Vikings may have been some of the very first tube fin-stabilized model rocket kits ever produced. (Centuri didn't come out with the Groove Tube until 1972.)

Semroc carries a nearly full line of FSI repro parts for cloning. (No Nike Smoke nose cone, probably because it's just a bit too large for the Krellvenator.) All of my FSI models (20 and counting) are clones. I am well along on a project to clone every single one of the 30 rocket models that FSI showed in their catalogs. Then it will be on to the historic variations (i.e., early vs. late versions).

This is my Viking 4 in a dry fit I did this afternoon. Semroc BT-70 based with BT-55 tube fins, it's an approximate 2X upscale. I think the tube fins might be a tad long, but based on the information I had, this was what they looked like 2X'd.

Welcome to the FSI Viking Gallery on TRF.

This gallery showcases the FSI Viking and those rockets derived from it. Particularly appropriate in this thread are the following:


If you have any additional information on this rocket and/or catalog photos please let us know.
Last edited: Dec 18, 2011

Mfg. Description: The VIKING 3 is one of the flagships of the F.S.I. Viking fleet. This beautiful and advanced model rocket is also an exceptionally stable and efficient model in flight. Extended stabilizers permit a wide application of model rocket engines. (FSI 1971 Catalog)

Mfg. Description: The VIKING 4 is for the advanced rocketeer who wants only the finest in high flying models.

Roam the sky. Be a bold one. Fly a Super Viking!

Mfg. Description: The VIKING V is the command ship of the Viking series. It stands 45.34 inches tall and features a transition section. The advanced design stabilizers make this kit unique in appearance as well as offering extreme stability. (FSI 1990 Catalog)


If you have any additional information on this rocket and/or catalog photos please let us know.
Last edited: Dec 20, 2011

Flight was very cool. A nice, slow liftoff and big, curving windcock to the east. Looking forward to flying this one in zero wind.

Recovery was eventful as the 12" chute brought the Viking 4 in a little hot. It stuck the landing at an angle.

Post copied with permission
Last edited by a moderator: Apr 3, 2012

FSI Viking 3. Pretty much a 1:1 clone, but with Estes parts.

Even with a C6-7 this was an impressive flight. Followed the same flight path as all of the E9 flights, but lower and at a steeper angle. The streamer brought it almost straight down and it wound up as my longest walk and toughest find of the day.

Post copied with permission
Last edited by a moderator: Apr 3, 2012