Good luck! I upscaled my GBI (Great big Inductor) from 18 to 24, and the larger engines damged the tubes much faster (blowout after 2 flights, as opposed to veey toadty after 5)

Nytrunner said:
Good luck! I upscaled my GBI (Great big Inductor) from 18 to 24, and the larger engines damged the tubes much faster (blowout after 2 flights, as opposed to veey toadty after 5)
Click to expand...

I've upscaled some of the "normal-side up" rockets to 18mm and successfully launched them, but they're not very efficient (very draggy of course) and so altitude wasn't very high. Still I thought they were very cool and fun.

Hi everyone, I'm back! Again!

Just an update that I had this on back burner but plan to revisit it again this year.

Before I stopped in 2016, I was actually considering a patent, so I didn't share out too much info, but I got as far as creating 13mm kits for some of my rocketry friends to try and test. Sorry, not going to create any of them anytime soon, but maybe in the future (which could be near future the way things are going for me at work *sigh*). Also I'd have to find the instructions on some old laptop somewhere.

Coolest thing was that these kits fit into a small USPS box! 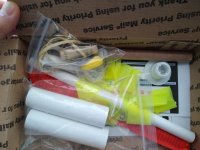 Also I don't recall if I mentioned it, but I did start some 18mm mmt upscales before my hiatus. I did have success with these and they were a lot of fun and so cool that you can carry them in a small box and convert them! Here I have a RAIStone and RAISJet version, complete with exhaust nozzle. 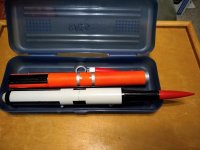 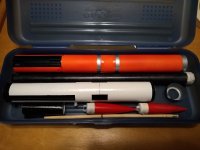 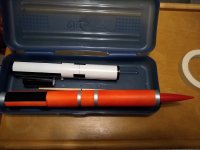 So I still plan more designs, builds and testing, but on a more relaxed and enjoyable pace this time!

BTW - I did test the Apollo capsule again with the newly available D16-4 and it boosted straight to about 100' and then went horizontal, so I think I'm close and have some ideas... 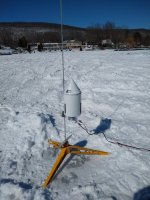 This hasn't been forgotten...life just got waaaay more complicated for me (and in many ways still is). However I've always wanted to revisit this and definitely will one day since it was quite a blast!

Another recent thread mentioned an "upside-down" rocket design, so I added my experience with "Whatside Down" and added the video. This lead to a few replies wondering about the design and what "trickery" I have going on (I noted that "there is a lot of hidden engineering going on, so it normally wouldn't work if built conventionally"). I didn't want to hijack that thread, so I figured I'd just update this one with what I had hidden up my sleeve on WSD...the "fins" themselves were ram air ducts!

I REALLY enjoyed brainstorming and building this one and I felt it came out beautifully; however it was really at the limits of what an A10-T motor could do and the weighted "nozzle" at the top was heavier than I would've liked (I don't think I got to test lighter versions). This one is also somewhat modular just like my other builds of this type; however the end "nosecone" with ducts is glued to the inner motor tube/body tube to ensure air doesn't leak out of gaps. 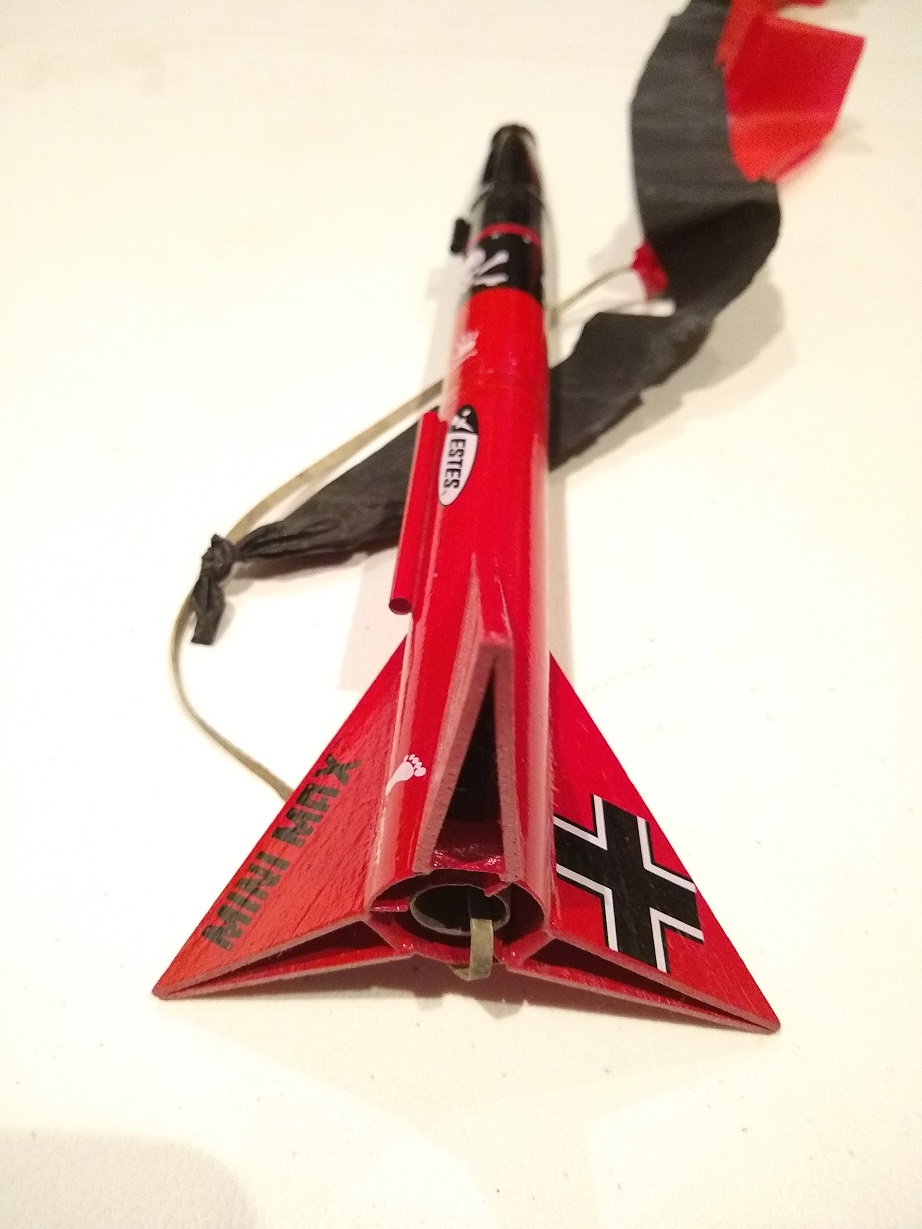 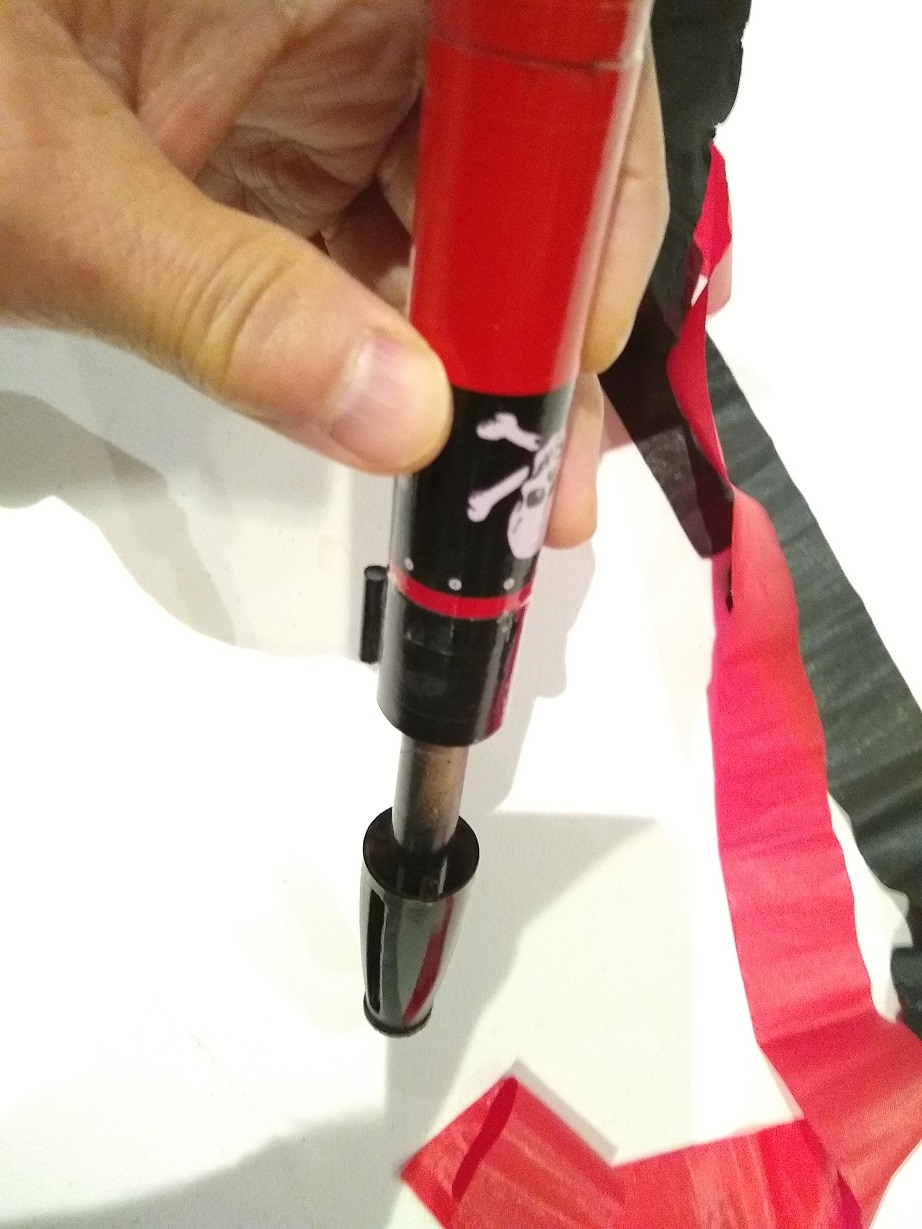 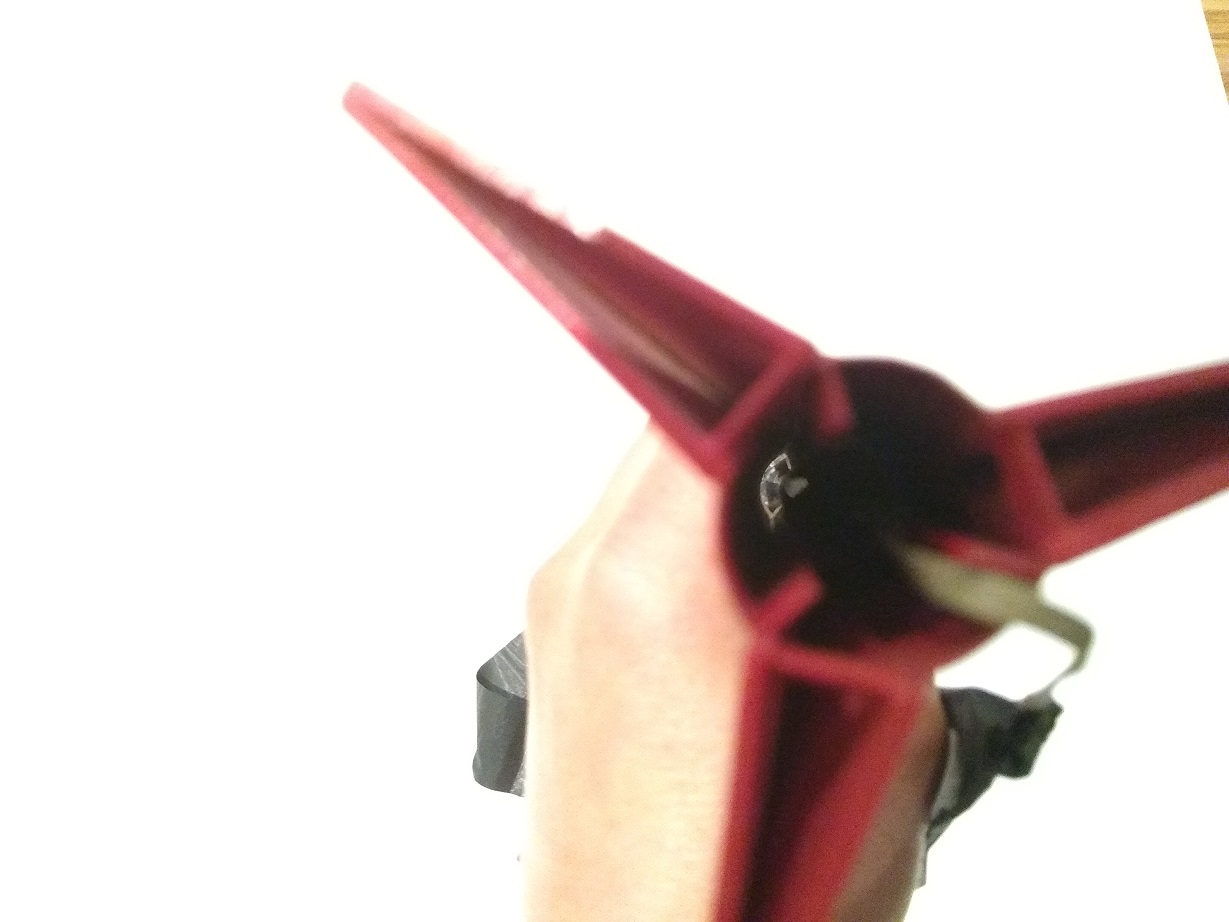 One day I'll try to upscale...mini engines are too limiting; however up-scaling means I need to test in a bigger area which is harder to do nowadays. Still, I think it'd be awesome and so worth it!
Click to expand...

Did you ever upscale the "mini-max"?

KenECoyote said:
(Note that updates are at the bottom of this first post.)

GOAL: To create a "finless" rocket similar to that defined by M. Dean Black (author of the Apogee Peak of Flight article on GDS) "Finless rocket design has long been a subject of debate among rocketeers wishing to build and fly true scale models of space launch vehicles and large military rockets which do not normally possess prominent fins typical of tail heavy model rockets."

There's been a lot of talk recently on the subject of finless rockets and I had thought up an idea for one a while back and I kind of hijacked a thread (AFAIK I hadn't heard of similar before and if there is, it's still cool to test this design myself and see what I can do with it).

Since I've started building a test bed for this and someone has mentioned "I might want to watch its maiden flight from an armored bunker", I decided I should give it a separate thread so all of you can share my journey as well as cheer, laugh and cry with me.

Here's the link to the other thread as well as the post and sketch I did of the idea I had...I'm calling it RAIS/"Ram Air Intake Stabilization" for now (better than Forward Air Rearward Throughput) :

The design I have isn't a tube fin since it has a blocked bottom and includes splitters going down the length of the area between the shroud and the main bt (represented by the dotted line down the side). This allows the air to funnel by individual section into each of the air outlets (simulating "air fins"). The sectioning also allows for some stabilization in that if let's say the rocket arcs over to the right of vertical, the left side of the rocket will get more air as it arcs, which sends more air to that side of the outlet, thus pushing it a bit more back to a straight path.

Additionally, at higher speed, the back pressure should make the upper shroud behave a bit like a larger nosecone, allowing for some base drag. Also at higher speeds, there may be a system loop formed when the higher volume of air flowing over the outlets helps to draw more air out as well to facilitate keeping the pressure building steadily/smoothly in the shroud (mindsim things so).

I already have a plan set out to test first in a B/C sized Estes Converter with BT70 shroud and if that works, I'll test a larger version using the Eliminator XL and BT-80 shrouds. The reason I'm using these rockets is that they are modular and have separate sections which allow me to test different configurations...starting with the RAIS as a small part and gradually increasing the portion of the rocket with shroud until only the nose cone is visible above the shroud (assuming successful steps along the way).

If that 2 of 2 config works in both Converter and Eliminator XL, I'd like to try a Mid-Power version like this:

Thanks to all the contributors so far that have provided a LOT of great feedback, thoughts, ideas and critiques (in response order): CrazyOB; rstaff3; neil_w and Daddyisabar.

I'll be posting more about the testing and builds as I go along, but in the meantime please feel free to provide feedback and thoughts (plus good rocket mojo).

Changed name to RAIS - I've added "Ram" since it seems to be a big part of this.

Here's a sketch of how I think airflow on this design will behave.

Here's a mini prototype rocket I've made which shows the design from a bottom 3/4 view:

This was able to fly up reasonably straight; however coast phase was difficult to track due to its small size.

Launch #3 Video Links (note the wind sent it over to the right; however the rocket didn't noticeably weathervane and instead drifted to the right):

I would consider "Well De-Finned" to be a successful design! More testing will be required; however I think this one is good enough to get the ball rolling on variations.

Build instructions for "Well De-Finned" are now in post #156.

Decided to take down build instructions for "Well De-Finned" until I do more testing.

Changing thread title to "Finless" (with quotes) and "Induction" to "Intake".

Added Goal to the top.

My best test results came from heavily weighted nose cones (think full of bb's and epoxy). Prior to that, I had a lot of unstable versions and the heavier weight seemed to give the design a very nice straight flight. RStaff3 suggested to me to try the design with the vents closed to see if the rocket was stable with just the weighted nose. I didn't think it would be considering my experience with the design; however I tried it and it was stable! It's a tricky situation and I would've preferred to give it less nose weight, but doing so means less stable/predictable flights, so right now this design doesn't look so good since it is also aerodynamically inefficient. I'll put this on the backburner since I have a few more ideas going on and want to focus on other things right now. To be continued...
Click to expand...

It was stable without the vents because the design is basically one big tube fin, me thinks...

lakeroadster said:
Did you ever upscale the "mini-max"?
Click to expand...

Not yet, but I was planning on launching the mini again soon after sine repairs.

However I also have multiple other ideas and designs I want to make and test, so this may take a while (apologies for that!).

Mike Haberer said:
It was stable without the vents because the design is basically one big tube fin, me thinks...
Click to expand...

You'd think, but tube fins work like regular fins and a body-length fin wouldn't quite work since the cp would be too far forward.

Another Crack at "Finless" Bullet Bill
2