well today was a milestone for me.

This morning when i got my 4 year old son up, he asked if he could go fly a rocket with me.

We have flown rockets before, but he was one at the time, and after the first launch the noise scared him and he cried -so we stopped.

I made a promise to myself that i would not force any of my hobbies on my children and wait until they showed some interest. Today was that day

Being four, his choice of rockets was "a red one"

the closest i have to a red one is a Fun rockets - wicked winnie.

Bill (my son) was excellent on the field, he helped set up the pads, packed wadding, put motors in the rockets, and more importantly for him launched the rockets with a count down.
after a few launches he decided that it was daddies turn to launch, mainly cos he wanted to chase the rockets, which again he did a great job.
at the end of the launch he packed everything away.

i had a great time, and flew some of my boring rockets on low powered motors - and really enjoyed seeing him get excited.

i've also re evaluated the Wicked Winnie, i use to think it was a fairly weak rocket, but for a 4 year old it is perfect. 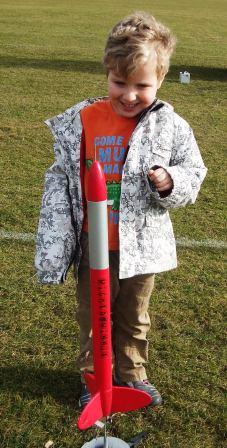 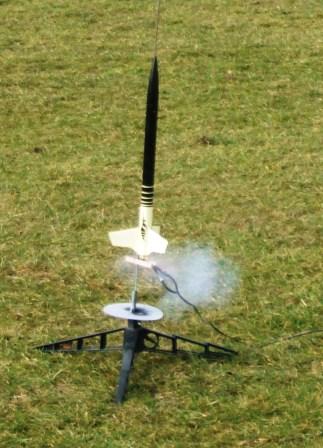 THATS GREAT!!!!! wounderfull isn't it. He is adorable too

Congrats on a very cute kiddoh, and a budding rocketeer to boot.

I'm hoping to expose my granddaughter to rocketry in a few years... she's eight months, now, and like Bill was at 1yr, is loud-noise-adverse.

I recently got into rocketry again so i had something to do with my boys and they have taken to it very well my 6 year old has "helped" put together a couple of small rockets and likes to go shoot them off. My two year old is obsessed my wife is almost angry with me I think. He sees rockets everywhere there have been two occasions the promise to go shoot rockets have been the only way to get him to be a good non tantrum throwing two year old.

Huh, throwing a tantrum can be rewarded by flying rockets... I wonder if that would work with my wife?

I am glad you had a good time with your son and you got to launch rockets. Sounds like a good time to me I take my fifteen year old with me and we have a great time so rest assured the fun can go on
Cheers
fred
M

no the only thing that works for wives is rum or diamonds .
U

It doesn't matter what the hook is, find something to do with your kids and vice versa. The fact that its rocketry is a plus. its all about family!

I started taking my son out to launch rockets
9 years ago when he was 5 years old. We still go
out for launches and we always have something
under construction. Next month is an outing with his
boy scout troop and I have been asked to orchestrate
that trip. My local hobby shop sold me a blast off pack
of B6-4's for $33. Only need to get a box of estes vikings.
Here is a video of of a blue ninja from one of my son
and I's outings. Or is it me and my son?

Now that's the epitome of rocketry right there Gillard! Thanks for sharing that with us.

My son's first trip out with rockets was when he was 3. I think the first motor lit that day was a J. He ran and nearly cried. By the end of the day he was crying, "I wanna push the button!" He will turn 7 in early May. I have a Flis Thing-a-ma-jig waiting for him up in the closet. I got one for myself as well so we can build them together. His birthday present will be a trip to NEFAR's May launch to fly his very own rocket for the first time. As long as he doesn't "pants" any more kids on the playground.

had my second flying day with Bill, - - he even prepped a rocket, does not get that you have to choose the motor and not just put in anything that fits.
he is a really useful recovery crew and definately saved my legs today.

After watching a few rockets float away over the trees, otherwise having them disappear and possibly a few tears, my guys are beginning to be more selective (and so am I).
You must log in or register to reply here.

GoFundMe Has Been Set Up For Ochieng, Son Of Eugene Awimbo (The Kenyan Rocketeer).