Trying to squeeze in a few more launches before it gets too cold to bring the kids out, we headed out to fly a few today. There was a consistent 5mph wind, but blowing away from the trees, so I wasn't concerned about losing any there.

On this flight i opted to put estes B4-2s in the boosters for the slightly longer burn and delay to eject in case the boosters tangled in the center core there would be more altitude for the center to eject it's recovery.

The flight went well, although lower than previous since the final second of center C6-3 burn was still toting the dead weight boosters.

Unfortunately I packed in the chute too tight and it failed to eject. On impact thev fairings halves broke into 3 pieces each, and the body tube crumpled. At first I was I upset thinking total loss, but I think I can replace the top 6 inches of the tube and the parts of the fairing halves glued back together like a puzzle.

This Falcon will fly again. 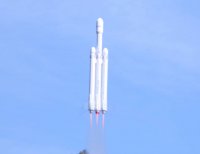 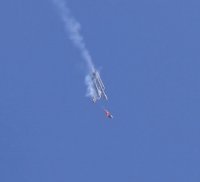 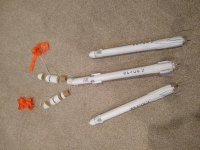 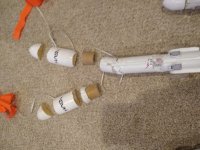 Bummer! But glad that it is reparable. Pretty cool stills of the flight. I had to stop the video before the end though, could not bear to see it lawn dart.

The stills where all three motors are burning are really great, congrats on that flight otherwise.

I didn't wallow in my sadness too long

Cut off about 5 1/2 inches of body tube and was able to (mostly) salvage the balsa conduits. I also took the opportunity to move the upper rail button much lower, which should help prevent another ejection failure since I'm pretty sure the parachute bundle was wedged against the balsa backer for the t-nut. 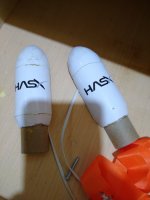 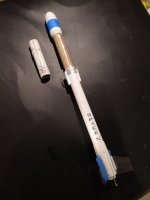 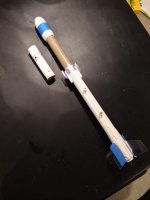 Got a first coat of paint back on it too. Just need to add some epoxy fillets to two damaged fins and she'll be flight worthy again. 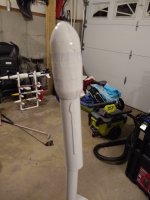 Glad you got it back to flight statis again! I hope your next flight has a great outcome

Do you have an ORK or Rocksim file for that?

SteveA63 said:
Do you have an ORK or Rocksim file for that?
Click to expand...

Yes, I have an updated version attached here. Mass and CG are pretty darn close to actual measured values. Simulation with mass of a JL Altimeter 2 shows max predicted altitude of 342ft, and on an actual successful flight an a JL Altimeter 2 I measured 332ft.

And just like that, back in business. Not sure when my next launch opportunity will be, but very glad to have this one back whole. 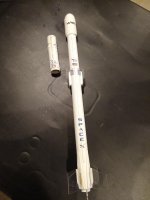 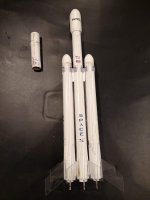 Wow! That's great, I've never rebuilt something that fast. Really glad to see it back in business.

Perfect afternoon for some flying, so I got the repaired Falcon Heavy back on the field. She had a perfect flight in her return to action 5 days after the lawn dart.

Wow, great to see back in action so quickly. I don't know why the 2nd video is so posterized but there is one frame where you can see all there motors are burning - very cool.

Congrats on the fix and flight.