Working on a concept for a helicopter recovery rocket. It was suggested to me that I post this. The original "XH-1" was designed for a night launch, so I wasn't concerned so much about making it pretty. It's ugly as sin, but worked well. Its 'blades' were fashioned out of drinking straws, which held glow sticks. They were attached to the rocket near the fins, hinged with a top secret material (ok since you are curious, Breathe-right nose strips, which have a perfect spring inside). 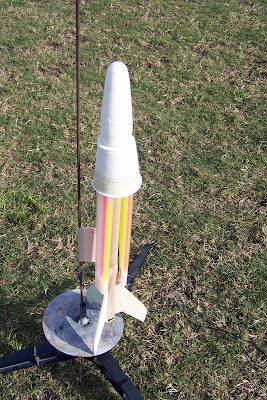 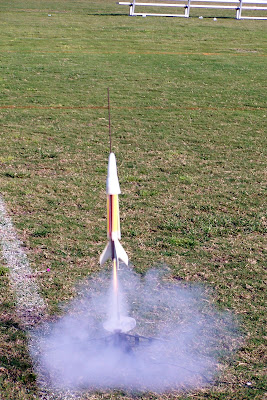 The nose cone, and attached dixie-cup, held the blades in place for boost. At the ejection event, the cone and the cup separate from the tube, which deploys the blades. The rocket flips over and helicopters down beautifully. It was cool to see at night, but I haven't got any photos of it. (which is fine because the glow in the dark paint i used was horrible and it looks better unfinished.)

I tried to recreate this system in another rocket (XH-2 obviously), a better looking one with basswood blades, but I need a better hinge material. I tried cardboard reinforced with nomex (nothing significant about the choice of material happened to have some laying around.)

Any suggestions? Has anyone tried a configuration like this before? It has already been suggested that the blades need to be wider.

Why not use wire to fashion the hinges? It'd be a little bit more work, but I bet it's a lot more durable.

Sig Manufacturing sells a variety of hinges and hinge material. (They are located in the "Aircraft Accessories" section.)

If you're looking for spring hinges, maybe you could take some from a clothes pin or similar clip. The blades don't need to be perpendicular to the body in order to rotate and slow it down. I also agree that the blades need to be wider.
Last edited: Dec 21, 2009

MarkII said:
Sig Manufacturing sells a variety of hinges and hinge material. (They are located in the "Aircraft Accessories" section.)

The main issue I had with the hinges i fabricated was that they were too floppy, and twisted about. I didn't have that problem with the glow in the dark rocket because the blades were fashioned in such a way that they held themselves rigid. I'll keep you posted on the development of this design. I might even call it the Mark II.

You'll probly like the nylon RC hinges then, they have been used in Mod-roc competition HD models for decades. There have been many rear deploy HD models as well they almost all have the same limited success rate due mainly to early high speed deployments. building your model to optimim mass to have the model at or very near 0 mph at ejection is the only really way to make rear deploy rotors work well. Good luck with the model is looks like a fun design

If your looking for a really quick and dirty, (cheapy) Hinge material just about any PETG clear plastic will work wonderfully. It's the stuff those nasty package bubbles are made out of. It can be folded back and forth over and over and can add a little bit of rigidity to the rotor/body joint. its used often for mod-roc HD and glider hinges.
Hope this helps.

Soda bottles are made from PET as well.

Biaxially-oriented PET film is a version of the plastic that has been drawn in two directions to produce a very thin but tough material. It is best known by its trade name, Mylar. Mylar is one of the materials that is used for hinges in model rocketry.

Picked up some RC nylon hinges yesterday that are the perfect size. Will keep you all updated.

Quick note/ update: nylon RC hinges work great until you get CA in them.

dragon_rider10 said:
Quick note/ update: nylon RC hinges work great until you get CA in them.
Click to expand...

One trick that I have heard is to dab a tiny bit of petroleum jelly into the hinge, just enough to get into the working parts. Probably the best way to do that is by placing a tiny blob of it with the tip of a toothpick and then using the toothpick to work it into the area that you want to protect. Flexing the hinge up and down a few times probably helps to get it worked into and around the part. Once you have bonded the hinge and the CA has fully cured, you can wipe off the excess jelly with a paper towel. The jelly is supposed to prevent the CA from penetrating into that section of the hinge. Obviously you need to keep the jelly off of the surfaces that you are bonding, so I imagine that you will need to be very precise and sparing when you apply it. I haven't tried this trick myself, but it sounds like it should work.

You can also remove the pin from the hinges so you can glue the hinge halves to the body and rotors without worrying about keeping the glue out of the moving parts. Then assemble the hinges after everything is good and dry.

Some hinges have a bump at the end to keep them from coming apart. It's very easy to snip that off. For some diameters of tubing, it's a good idea to trim the hinge down in width to match. I don't think you'll have that problem based on the pictures.

That is the classic and most popular way to address this issue. There was a brand once that had removable cotter pins for the hinges, but it has been out of production for awhile. If you clip the nub to allow you to take out the pin out of a hinge with a non-removable pin, you will probably have to replace it with a new piece of thin wire and bend the ends to keep it from falling out. And since you would be bonding each hinge half on separately, you'll have to be very precise in your placement so that the rotor hangs right and pivots freely when you re-pin the two halves together.

All right enough of this balderdash about precision and biaxall orientation. My chopper rocket is done. Pics and a test flight this weekend.

Ok as promised. Photos of the upgraded Mark II. Plus an almost successful flight. From its first incarnation I added tube fins to support the extended blades and used the nylon hinges. The flight was on an A3-4t, which gave it decent altitude. The blades deployed at about 100 ft, but did not induce rotation. On landing, it popped one off, so back to the drawing board.

Estes Goblin - that fragile loop on the nose cone

B
ScrewBall in side pocket, reverse stability