One of my R/C aircraft flying buddies does a little model rocketry as well. Paul Willenborg is a very accomplished modeler that lives in North Little Rock, AR and I travel to Little Rock every June for an R/C event for all types of small flying models: R/C, free flight and rockets included.

For the 2014 event, Paul decided to do a quick and very clean R/C conversion of the Estes TransWing B/G. We all know that that this Estes design has an issue or two (has a real weight issue), but I always liked it anyway.

Paul used a Spektrum AR6400 ultra micro brick that has two linear servos, the RX and other electronics all on one board. Not sure if his brick was a new one or one salvaged off of a used Horizon uM R/C model. Used brinks are quite inexpensive. I have gotten them for as little as 20 bucks. The battery is a single cell 150mah lipo.

Interestingly, by replacing the wood with better but not contest weight balsa and using a very light carbon fiber tube for the tail boom, the R/C TransWing glider came in at 1.7 oz, notably less than the advertised Estes advertised weight of 2 oz for the free flight glider. Paul also added a half inch to each wing panel (2inches total) and made the tail surfaces a little bigger and prettied them up a little bit.

This entire conversion was done in one short evening the night before our R/C event in Little rock started.

The model has several flights on it and does nicely. It did have one red baron entanglement, but shook loose just before hitting the ground. Paul is working on a MUCH lighter booster for the Transwing to improve the boost performance on a C6.

We are thinking about putting two of them on a D12 powered booster for a better vertical boost. I have the parts for a couple of Tranwings scattered around in the garage and I am keeping an eye out for them while looking for other rocket parts.

Thought the TRF boost glider fans would enjoy this and perhaps it might spark some similar creativity. The Horizon Hobby Parkzone and Hobbyzone uM R/C models that use the brick pictured here can be picked up used very inexpensively on RC Groups and R/C Universe and at local R/C swap meets.

Cool project, thanks for sharing!
A

Haaaaah, I remember getting one of those when they first came out. Heavy, arced on boost, but managed to get it to glide well enough. Made an upscale of this as well using Readiboard panels, glided niiiice but harder to deploy such large tip plates correctly.

Might revisit this sort of thing again. Like the idea of PG'ing two of these off a single carrier so they cancel each other out.

Nice looking conversion there. What kind of performance are you getting?

TheAviator said:
Nice looking conversion there. What kind of performance are you getting?
Click to expand...

Nothing spectacular. I think the flights Paul made on a C6-3 were around a minute or a little more or less, due to the heavy model, heavy booster and the arcing over before ejection. Hang time in dead air looked just like a well trimmed F/F version, overall.

It is just for fun and the walk to retrieve the model is very nice...

One advantage of R/C is that you can instantly trim it out for a good glide path with the sticks.

I actually flew one of these as a FF at NARAM one year, having nothing better in hand, and it got a flight of 45 seconds and a flight of a minute. Not very competitive...
B

I got my kit in the mail yesterday. I'm new to the rocket seen but not the R/C side. Man, this thing is heavy..especially the booster. I'm betting replacing the tube there alone would really lighten the rig up for the C motor. Also planing on air foiling the wings .

Missed this thread the first time around. Neat project, especially the mods to make it lighter and fly better, despite the added weight of the RC gear.

For a twin model, it would be good for them to be colored differently so the pilots can tell which is which easily. Magic marker would do, does not add much weight. 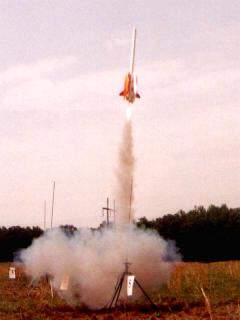