Anyone ever build one of these?? I just purchased one via an Ebay auction. One of those kits I always wanted. I've read some reviews online that it is not the best performer. Any suggestions of improving performance and increasing strength of model.

Sorry, my SR-X was destroyed after the ejection charge launched it into the ground!!! Wish I'd taken a picture, it was brutal! First and only flight.

I have one of these still in the box also. I posted the same question last winter and no one spoke up, so I guess you and I are the only ones who wanted this one.
P


"The Radiator" : Sorry, my SR-X was destroyed after the ejection charge launched it into the ground!!!
Click to expand...

Thanks for the replies. I'm going to need to think about this one a little while before I build it. The foam fuselage shells are much more fragile than I anticipated. The SR-X looks like it uses the same Power-Pod setup as the Estes foam Space Shuttle model. (i.e. heavy motor tube with weight (washers) forward for boost and ejected for glide. There must be a way to either stregthen or duplicate these foam shells (in case of critical damage.) Ya gotta love this hobby, always a new challenge!

My mate and I had one of these many years ago - very heavy as I recall. We launched it on the recommended first flight motor (B something or other I think) and it launched straight, flew to a great height of about 10 feet went into a powered dive snapping the nose cone off. When the ejection charge went off motor assembly flew out partially and split the body shell. It was not terribly successful.

My advice - use a bigger engine!

If I remember my flight correctly, it flew just fine until the thrusting ended. Then it glided for half a second, and took a nice nose dive (about 60 degrees under horizontal). The ejection charge went off, and powered the glider into the ground. I do want to get another SR-X, but I won't be flying this one. It was a cool one just to look at. Elbmod is correct, the SR-X is a tad portly, so trimming is important! Let us know how stengthening the shell (or building a stronger one) goes. Happy building!

Well, I just got back from a shop that only sells rockets.

Been there only twice now and low and behold what did my eyes catch:
Picture: 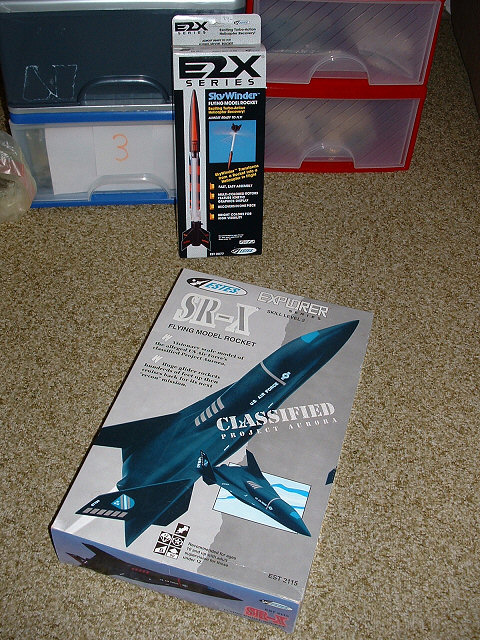 ... a in the box SR-X. I never would have really paid attention to it if it weren't because of this thread.

The red color on the box is all but gone from it being placed at the shop windows.

I also saw a SkyWinder (I have one that I've flown) and was surprised to see it too. So I took that along just incase I need spare.

I have to say, the SR-X is an interesting rocket. If anyone here has a built kit and maybe has some pictures/videos of flight, that would be neat.

BTW: The shop also had a Sweet-V and an Strato Blaster. Hhmmm.....
R

Nice find!! Sounds like you got a pretty good deal. I paid $41 plus shipping for the SR-X off of ebay. You got both kits for less than that. I also like the Skywinder kit, although I lost the nose cone this past summer during a beach launch. It was the second time that the nose cone had detached on me. Seemed like anything more than a B engine (ie C6-5. C6-7) risked loosing the cone. Not sure why, as I thought all 18mm Estes engines used the same ejection charge. Good luck with both kits. Let me know how you make out with the SR-X.

I have two of these in boxes....was about to add them to my collection of "starteds"

wanted to build on in the black as on the cover art, and do another like one of the NASA shuttle designs, in white, black and grey

I'll let you know how it all comes out, and if anyone has tips, please share them!
R

Thought the other folks interested in the SR-X would like to check out this site. It details the construction and modification of an SR-X for RC flight. Pretty cool!

So are these things still available? It looks like a lot of fun.

Originally posted by Chilly
So are these things still available? It looks like a lot of fun.
Click to expand...

You can find a kit on eBay sometimes though.