I am starting on a vintage Estes Scout. I will add the guaze to the wire, but may not add it to the fins.

Why would you leave the gauze off of the fins? With the heavy drag of the thick fins and the heat of the motor softening the glue it would seem any bit of hold you could get would be a benefit.

Don't forget, 1/2A6-2 for the first flight and you might see it again (unlike one club president I won't name).

I went with the gauze and it is not too bad. I still have to apply another coat of Elmer's glue to the gauze and 3 coats of sealer to the balsa. After a shot or 2 of primer, you probably won't even see the gauze.

Scigs30:
you can use the gauze per the insturctions and still get a very nice finish.
I did my orginal scout the same way. Using methods from the 60's it came out very well.

Micro, that looks great for a hand painted rocket. I am building from the late 70'era so mine will be spray painted. After the second coat of white glue and sanding, it is now pretty smooth. I sanded away the loose ends and will prime tomorrow or the next day.

That looks great. I'm glad you went with the gauze. Can't wait to see it finished; sounds like you're going for a show piece.

I hope you get lots of flights out of it.

I remember building a Scout back in the day. One tough rocket. Must have flown it 20 times before I put a B14-7 in it and never seeing it again.

Back in the old days I used to fly at a local mall parking lot on Sundays (Yes boys and girls stores used to be closed on Sundays!). Even hitting the asphalt didn't break those fins.

I remember those days. Chicken dinners at home with the family. Here is my Astron Scout after a few flites. Plus extra parts for a few more builds

I've never seen this technique. What's the purpose of the gauze?

dragon_rider10 said:
I've never seen this technique. What's the purpose of the gauze?
Click to expand...

Hey Dragon Rider 10,
It reinforces the connection of the fins to the body tube. It also holds the motor hook to the side of the tube.

The fins are very wide and would have limited contact with the tube (sanding a slight concave on the root edge helps). Using glue and gauze is not unlike laying up fiberglass and resin.

The motor hook also sticks into the nosecone but would not adhere to the body tube very well on its own (white glue and metal don't readily bond). Here the gauze spreads the load of the hook over a larger area of the tube.

It was the 50s and a simpler time; and everyone had gauze in their medicine cabinet in case you needed to make repairs.

The Scout could be made strong and almost bullet-proof; it was more likely to fly out of sight than get damaged at the end of its tumble recovery.

The gauze does make it stronger, and after a couple coats of Elmers Glue, it smooths out just fine. I just noticed on one of the pictures I posted there was a change. After that picture was taken, I noticed I put the launch lug on the fin that I wanted black. So before the glue was fully dried, I pulled up the gauze and removed the lug and relocated to another fin. I will post the correct picture that shows this. Also I have 3 coats of balsa sealer and 1 coat of primer on. I will sand the primer and shoot another coat.

Here is a picture of the first coat of primer. Most of the Gauze is covered, so after sanding and one more coat of grey primer, it should be smooth. I will then shoot one coat of white primer and one top coat. I do this so I don't use all my old formula glossy white Krylon. Here is a picture of the primers I am now using. I really like this stuff, sands great.

KennB said:
Why would you leave the gauze off of the fins? With the heavy drag of the thick fins and the heat of the motor softening the glue it would seem any bit of hold you could get would be a benefit.

Don't forget, 1/2A6-2 for the first flight and you might see it again (unlike one club president I won't name).

I used to have a scout 2 back in my younger days of launching and I regularly flew it on B's and C's and always got it back.But it always kicked to motor out so it would make a whistling sound on the way back down so it was easy to track it once you could hear the noise and the thunk of it hitting the ground.It had quite a few dozen flights on it before finallt being retired after a fin finally burned through.The only mistake I made on it was painting it almost all white, it's first flight it blew the nosecone off.You would not believe how many white pieces of small trash litter a field until you start looking for a small white nosecone.Took about 2 hours with 3 people cris crossing the field in straight lines to finally find it.

Here is a shot with a coat of flat white. Tomorrow will be the glossy white.

I have the Glossy white on the rocket and she looks pretty good. Tomorrow will be the black fin and the next day will be the red nose. Still looking through my collection of decals to find the "Estes" decal. The gauze smoothed out better than I thought. You can see how smooth the gauze is over the engine hook when compared to my Golden Scout. The Golden Scout came with paper for the hook, looked good until I painted it. My goal of this build was to use everything in the kit and still make it look like the Face card, and I am close. This is much easier than the Estes Colossus...........Estes photo model was not the Maxi Alpha, that's for sure. 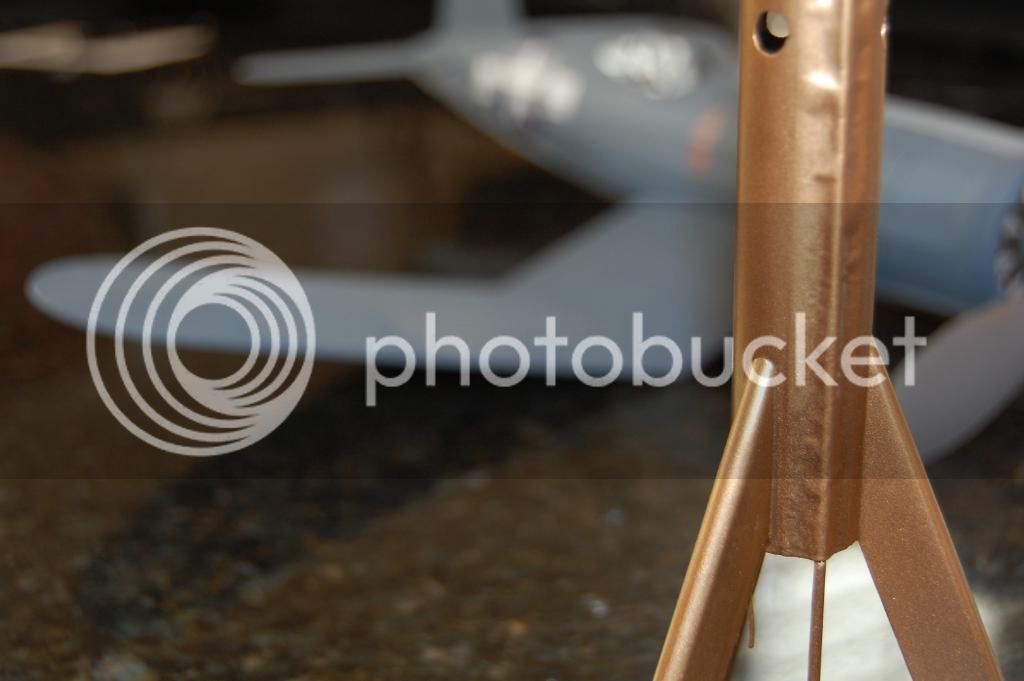 Finished the Scout, found the decal in my Sprint kit and applied 3 coats of liquid decal film.