Coyote Rocketry sponsored a contest to take a semi-scale Estes Bullpup and see who could get it closer to scale. I always enjoy a challenge and had a great time figuring out how to get this done.&amp;nbsp; I figured others might want to build a closer to scale Estes Bullpup and so here goes my first build thread. Thanks to Keith Frazier at Coyote Rocketry and Jorge Blanco and all at Southern Area Rocketry for being a great club and entering the rocket on my behalf while I&#8217;m travelling. The rocket was able to win the contest and I&#8217;m pretty excited about that.

I used the information posted in the thread, &#8220;Scale Data Estes BullPup 12D&#8221; from Peter Alway and repasted below for your convenience. ; The diameter of the body tube sets the scale to 1/9 and so I used that to determine the size of the other components. This meant that I would have to redo the nosecone, tailcone, fore and aft fins, and overall length to get the model to scale. The nose cone in the kit was the incorrect length and shape to be scale. I 3d printed a correct nosecone (photo below, 3d printed one in black is on top with the kit nosecone in white for comparison). It was printed using carbon fiber impregnated ABS plastic to be the correct shape and length. The shoulder for the nosecone was printed separately and glued on later (after the nose weight is added so read everything before you do that). I used 10% infill and the 3d printed part was lighter than the original nosecone. In hindsight, I should have printed it completely hollow. Carbon fiber impregnated ABS was used because 1) it sounds really cool, and 2) it was what our grad student had loaded in the printer and I was too lazy to change it. I think ABS or PLS would work just fine. I am currently travelling but I will post the .stl files for the 3d printed parts when I get back so anyone can replicate this.

The tailcone of the actual missile tapers in to an elliptical shape that is not captured in the stock parts of the kit. The kit tailcone is also the wrong length. A new tailcone was 3D printed to better replicate the tailcone of the actual missile (pictured below). Again, I will post the .stl file later when I get back in town. The tailcone was fitted, the motor set to protrude 1/2" from the back edge of the tailcone, and the motor mount location was set based on that. It was setup for friction fit. This does offset the engine further aft than the original kit.

Rear fins were cut to scale from 1/16&#8221; basswood to better replicate the width of the actual fins in 1:9 scale (technically, they end up being 0.020 inches too large for scale but they look more scale). I used basswood for the added strength and less wrapping than balsawood but the fins will eventually get papered and so, in hindsight, I think balsa would work well. Rear fins dimensions were pulled from Peter Alway&#8217;s drawing posted earlier. The photo below shows the differences between stock and scale fins.

The actual missile has spin tabs. To replicate this in the model, I scored the fins where they would need to be bent and carefully bent it a little to begin the spin tab (photo below). By scoring the wood, I also weakened it and it is not possible to get all the spin tab angles correct. To fix this, I fabricated tooling that hold the spin tabs at the correct angle while the fins were papered.

Tooling for the spin tabs were created by sanding an extra piece of basswood to the about 5 degrees for the spin tab (photo below). This took a bit of time and patience.

This angled piece was glued to another piece of basswood (see photo). A second piece of basswood was angled to match the inverse of the first piece. The combination of these two pieces of tooling would make a mold. The fins were then laminated with paper, loaded into the mold and held in a press (could also be done with weight stacked on top but I had a press so why not use it) until the laminated paper/basswood fin had cured.

The leading edges of the fins were sanded at an angle, expect for within 3/16s of the root to match the fins on the actual missile (photo below). This also took a fair amount of time and patience.

And I will continue this on the next post because it appears I've reached the picture limit per post.

The finished fins and tailcone were then glued onto the body tube. You can see the spin tabs when looking directly from the back.

The forward fins were made to scale from 0.040 polystyrene (photo below). I only used the top corner (it may be hard to see the pencil line). I left them long so I could hold them while sanding the correct angles for the leading and trailing edges.

I cut the forward fins so that there was a piece that would go into the nosecone and replicate the steering shaft. I glued with thin CA the root edge of the fins flush (incorrect) with the nosecone for added strength because I was afraid they would break off when this model flew. I will add a dark wash around the root to give the illusion that they are not connected during paint.

Additional details were added with styrene you can buy at any hobby shop.

.040 x 0.60 square styrene was cut to replicate how the rear fins were mounted to the missile. The longer side was parallel with the fin surface. The root edge of these strips had to be sanded at an angle to better match the curve of the body tube and eliminate the gap that would form. I colored the angled edge with a sharpie so that I could see how well I was sanding across the styrene and it reminded me which side to glue down. Thin CA was used to keep the transitions from styrene to body tube/fin as sharp as possible.

.040 welding rod was cut and then radiused into the fin on one side with squadron putty to replicate a cable housing on the actual missile. Welding rod was used because only out of convenience in that I had bunch for my TIG welder. Rear clamps were added to replicate how the missile was held onto aircraft using more .040 styrene sheet. The short forward launch lug is meant to represent the forward clamp on the actual missile even though it looks nothing like it.

This wasnt as straightforward as I wanted it to be because I had to add the nose weight before I glued the nosecone shoulder onto the nosecone. This meant that I had to have rocket almost ready for paint so that I could measure the actual masses and CoM of the parts to correctly draw it in openrocket. Before I go more into the noseweight, Im going to sidetrack into a couple other things I learned in hindsight about the nosecone design. The nosecone was printed in two pieces because if I printed in as one piece, the printer would add supports to handle the nosecone/shoulder transition and I didnt want to deal with sanding those later. The shoulder was designed with a boss that would insert into a hole in the base of the nosecone to locate and center the two pieces while they were being glued together. This was a bad idea because 1) the resolution of the printer wasnt good enough to hold the tolerance I wanted, 2) I had to drill a hole down the nosecone through all the infill that I didnt need to add the nose weight and this obliterated the locating hole in the base of the nosecone, and 3) all of this was entirely unnecessary as it was very easy to center the shoulder piece on the nosecone and hold it there while the glue set. Nothing like overthinking things
View attachment Scale Bullpup v1.ork
Once I was able to get the rocket almost ready for paint, I weighed all the parts and made the openrocket model match what I measured. To get 1 caliber stability margin required 22 grams of weight in the nose for my rocket. I added 25 grams just to be on the safe side to the nosecone and then glued on the shoulder and finished priming and painting.

A friend of mine in Dayton, Ohio went to the Air Force Museum and photographed the AGM-12B they had on display. Custom decals were generated based on those photographs and applied to this model. I have pasted the .pdf for those decals here. They are not organized and there are many extra ones because I wasnt sure how some would lay down and wanted extras. Youll have to look at the pictures below and figure out which ones go where. 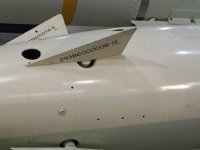 Finally, I did a dark wash to outline the root of the fins to give them the illusion that they are not attached to the rocket.

Contest rules required the rocket to be flown and recovered. It was flown on a B6-2 to maximize the chances of success. It was a bit underpowered given the additional mass but it went up and came back down okay. It would probably fly a lot better on a C6-3.

For anyone that aspires to build a scale Bullpup from the Estes kit, I hope this build thread helps you along that goal. I&#8217;ll get the .stl files posted for the nosecone and tailcone in about 2 weeks.

Wow! This is an amazing build. Such dedication to craft.
P

Well this thread 100% justified the effort I put into that drawing 20 years ago! I should mention that it was the late Fred Williams who actually did the hard research work, including measuring off the missile at the Air Force museum in Dayton for an article he published in his local NAR section newsletter.

Very nice work!
Thanks for sharing the pics and decal file.

That is magnificent! Great work, and thanks for sharing!

Wow, this blew my socks off and got me out of forum-hiatus! Fantastic build and congrats on a well-earned contest win! :clap:

Also quite generous of you to provide all those files to help others...definitely deserves special thanks!

Dang! About a month too late for me. I've got mine in paint right now, but it's bone stock, and I surely couldn't have done the fine job you have done with yours. Congratulations! :clap: I may have to try another one in the future.

Thank you everyone for the compliments. I had a ton of fun building this.

You'll find the necessary .stl files attached for printing the nosecone and tailcone attached below.

Wow. That is some next level attention to detail.

Super awesome! The Bullpup has always been one of my favorite missiles and I have always wanted to correct the Estes version. That tailcone has always been a no go for me however. Any chance you could give a little bit of instruction on how to make the rail guide on the back end? Congrats on winning the contest. Well deserved indeed. And thanks for sharing this excellent build.