I redesigned my Bomarc kit to be 2 oz lighter and now able to fly on the standard E6 motors I prefer. I also reduced the number of special parts needed so I was able to lower the price and I can now offer it as a standard item.
Instructions are here: https://dynasoarrocketry.com/?page_id=6224
Price is $82.99 shipped priority. This is still the ONLY RC rocket glider bomarc kit ever produced.
If interested pm me. Here are two test flights of the updated prototype before decals were added.

I have added the F-35 and Thunderchief as kits now in the lineup.

The F-105 Thunderchief RC Rocket glider kit is based on the cold war era mach 2 nuclear bomber that was utilized in Vietnam for bombing and SAM supression. It was the largest single seat single engine jet aircraft of the time. It features a mid mounted 9mm depron wing with spar installed, 2.6″ white tubing for the body pre-slotted for the wing and tail, rear of body tube pre-cut to simulate afterburner/speed brake petals, and the depron tail surfaces have the spars pre-installed. Rail buttons holes are are pre-punched and comes with a white plastic nose cone. Specs: 34″ length, 26.5″ wingspan, 11.5 oz rtf, for 24mm E-6 single use or reloadable motors.

The F-35 Lighting II RC Rocket glider kit is based on the latest Gen 5 US multi role combat aircraft. It features a high mounted wing with spars pre-installed, a plastic nose cone, 2.6″ white tubing for the body and depron wing and tail surfaces. Elevons are pre-hinged. The body tube end is pre-cut at an angle and the rail buttons holes are are pre-punched. You will need two 10 gram type servos, a receiver, and a small 500mah single cell lipo battery. Specs: 28″ length, 20″ wingspan, 9.9 oz rtf. 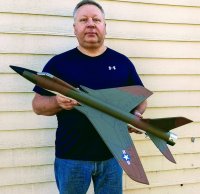 I have finally finished the Dynasoar Klingon Battle Cruiser II and applied the appropriate Sticker Shock decals. I found this model to be a little bit more challenging than most of Frank's models. My model is ready to fly. Currently, I am waiting for fire restrictions in our state to be lifted.

I finally got around to flying the Klingon Battle Cruiser II on an E6 motor this past Saturday, May 15, 2021. It was probably flown by noon or later and the prairie winds had kicked up. I waited for a lull in the winds and gave the LSO the go ahead and we had a quick launch. I didn't sense any tendency for the model to move back towards me, but the winds were turbulent soon after launch. I think I kept my hands off the stick going up, but the wind was chaotic. I think there were times on the way up that the model was pointed a little bit sideways to the trajectory for an instant. After ascent I quickly put the toggle switch on glide. It was pretty hard to fight the wind and the wind took the Klingons wherever it wanted to go. On landing I had the stick on full up nose. I would say the model ended up a quarter of mile away. The weeds are dry and stunted due to the dry weather, however, the dry weeds are tall enough to hide any model. I gave up looking for the model and took a different route back to the flight line and my wife was way far away in another direction and then I saw the Klingon Cruiser lying perfectly flat on the ground completely unharmed.

George Scavella sent me some great photos of his completed Dynasoar kits, he just did a superb job on the finish and details!
The shuttle features some 3-d printed nozzles that are available from boyce aerospace that he offers for my kit. 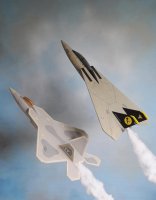 I flew the Klingon Battle Cruiser again for the second time. Actually, I flew the Aurora Clipper just before the Cruiser, both on E6 motors in no wind. There was a little bit of chatter coming from the Clipper's servo's on the pre-launch test (I think the chatter was audible, but not visible), but as soon as I moved the control stick, the chatter was gone and elevon responses were very good. I was a little bit heavy handed with the Clipper on the glide trying to make it go where I wanted, but it seemed like a light hand was better. With the Cruiser I was more even-handed. I did notice after lift-off during the powered ascent that there was a tendency as described in the instructions for the Cruiser to drift behind me, so I gave the model a little bit of down-nose and sent it back out away from the flight line. Overall this was two nice launches on a pretty day.

Some flights from today, Moonraker, X-15 and X-20 Dyna-Soar, thanks Jordan Slavish for inviting me to the scout launch today!