Today was a more productive flying day than my last few visits to the range, and I also flew bigger stuff. Slightly bigger, not much. Or at least, the bigger stuff flew more consistently and successfully.

My girlfriend shot the video for this one, staging and separation clearly visible. It’s impossible to see in the video, but being there personally, I thought I could see the jets of smoke shoot out through the vent holes.

What I couldn’t see, at least in the immediate aftermath of the launch, was where my booster stage landed. Mindy felt bad about losing track of it after agreeing to watch it for me, but I assured her that that’s just part of what we do. I eventually recovered it after some kind soul returned it to the launch control table, but the lesson was learned and agreed upon by us both: Booster Buddy and Videographer are separate roles.

I’m currently away from my fleet so I can’t post a photo right now, but there is something about seeing the char patterns on the booster that makes it more beautiful. Every flight makes a permanent mark on it, becomes part of it. Maybe that won’t be true after a dozen flights or so, but right now, I love looking at it.

Mindy also made a flight on her very own rocket, a Ticonderoga No. 2 HB pencil she constructed from an Estes Yankee kit and brush-painted by hand, dubbed the Yankee Doodle. This was its first flight on B power, a B6-6 in this case. Nominal flight and recovery with only the slightest bit of paint chipping in the leading edge of the fin. She thinks it was either from the rod or from touchdown. Easy fix either way. 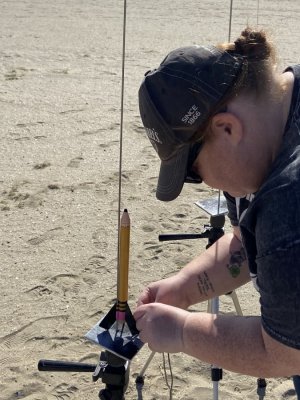 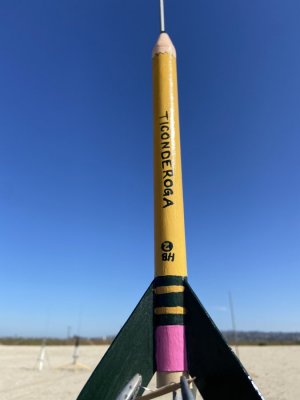 The third flight was my Super Luna Bug, going as a single-stager on an A10-3T. This flight demonstrated its remarkable Fire and Forget technology: Fire it off, then Forget about it, because you’re not getting it back!

I had anticipated that that would be my last flight of the day, but this kid in the campsite next to us wanted my last C6-5 and he was quite happy to part with two of his B6-4s for it. The Super Hi-Flier made two more flights in single-stage configuration on those motors, both nominal.

On the second one I decided to experiment with my streamer packing method and went with an accordion fold. That went much better than wrapping it around the shock cord like I normally do, I actually got full deployment on it.

That was it! After debating whether to assist with further flight ops and range teardown, our stomachs had the decisive say. Next event will have a meal beforehand or range snacks