Today wasn't a super busy flying day for me. Instead, I spent a lot of time at the range helping a few newcomers getting their rockets set up, both attendees I had invited and those who just happened to look like they could use some assistance. It's for this reason I didn't get photos of the launch itself. Oh well.

Flight 1 took place in the 9:00 hour, my Super Star Trooper flown as a single-stage with an A10-3T. This one CATOed, with this result 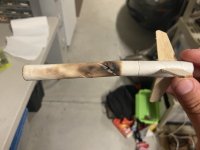 I contacted Estes and filed a MESS report as well. Date code was D21 0521 , which appears to have been having some issues. If you have an A10 with this code, use it carefully. It’s probably not a good idea to fly it in a demonstration flight for a first-timer (don’t ask….).

Flight 2 went better. My Hi-Flier XL had a textbook flight and recovery on a D12-5.

Flight 3 was my Star Orbiter’s first time flying since November. I fixed the ripped shock cord last night and it worked perfectly today. Up and down on an Estes E16-6. This also marks the first time I’ve used the disposable retaining rings that John Pacente gave me in October.

Flight 4 was the last flight of the day for me. With the wind picking up, I requested that I be allowed to fly my Hi-Flier XL again on another D12-5 with the launch rod angled a few degrees into the wind coming from the west. The RSO was afraid it would go horizontal but nervously agreed to it when I explained I was merely trying to avoid a water recovery. As it turned out, the angle was perfect. Straight flight, like a laser beam from the pad until ejection, but the chute never made it out of the tube. The nose popping off prevented it from going completely ballistic but it regained stability and speed on the way down until it plowed into the ground a few feet in front of the RSO’s car, having drifted a bit south in the wind. The 45-degree angle impact crumpled the forward body tube a bit. 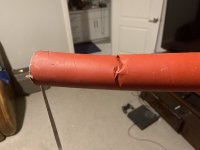 I’m not too worried about it though. I was going to order another kit anyway…

Sorry I missed the launch! Really had planned to be there, but work ran late and I ran out of time.
You must log in or register to reply here.