I got out to the range today after over a month since my last opportunity to fly. Today was a good day.

I only managed to get two flights off. First up was the maiden flight of my Super Generic E2X, basically a Mongoose the hard way. Nominal flight on an A8-0 / A8-5 stack, although OpenRocket was correct with its prediction of excessive arcing.
View attachment trim.7EC1722F-8FF2-4C15-823E-FFA4F4533719.MOV
About the only bit of trouble was the booster’s motor hook disappearing into thin air. It was nowhere to be found when I recovered the booster.

For the next flight I decided to up the ante a bit and upgrade the sustainer to a B6-6, angling the rod a bit closer to vertical for a straighter flight. This one was less than successful. The stages separated but the sustainer failed to light. At first it fell sideways, its fins rolling it, but in the last portion of its descent it straightened and impacted the surface with a good thud. It was at that instant I was glad I had decided to keep the booster motor pretty small for the first few launches. If it had come in from the altitude that a C6-0 would have put it at, that could have been trouble. 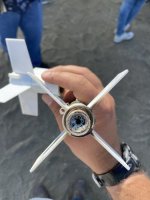 This is the third time I have had this error. The first was with my Super Gnome, where my application of tape was nowhere near strong enough to hold the motors together long enough to stage. I improved my technique and got it to work reliably enough at November ROCstock and subsequent launch events. The second was with my Super Star Trooper with DART. I did not determine the cause of this failure at the time but my best guess was that the remnants of the booster propellant grains simply missed the nozzle. That rocket was also small enough to tumble back without damage. This larger, heavier one wasn’t so lucky.

I solicited some troubleshooting input from the other fliers at the range. Jim Myres from Discount Rocketry examined my rocket and he mentioned the gap staging techniques with which I was already familiar, pointing out that the pressure probably popped the booster off before the sustainer could ignite. I was puzzled as to how this was possible, since I’d taped the motors together with what I thought was decent technique, but since packing up for the day I think inclined to agree with him.

Since getting involved in rocketry again, I’ve noticed that the cellophane tape that I packed in my range box is pretty weak in terms of adhesive strength. It’s not exactly the kind of weak that you’d find on a Post-it note but it’s substantially easier to remove from surfaces than the translucent Scotch tape with which I’m sure we’re all familiar. My guess is that he is indeed correct, the motors were not held in place firmly enough.

I also now believe that this was the reason for my Super Star Trooper’s staging failure.

After that conversation I returned to my table and removed the unused B6-6 motor. The friction fit was a bit too tight, so I ended up pulling out the entire mount and cutting the motor mount tube to get the motor free. Given the previous water recovery and today’s nose-first crash, I think this rocket has earned retirement.

I ended up buying a pair of standard Hi-Fliers from Jim’s trailer to continue flying 18mm two-stage at the next DART launch and possibly LDRS. Hopefully a new roll of tape will resolve my staging woes and this won’t happen again for a while.
Last edited: Apr 30, 2022