How do you determine the correct dihedral angle for a scratch built model? G. M. Gregorek in his Design Rules for Boost and Rocket /Gliders stated that "The proper dihedral angle is obtained by raising the tips of the wings 1/8 inch for every one inch of wing span". I've seen this repeated in several places but it seems too simplistic and doesn't answer some questions, like:


> How do you calculate the correct angle for each panel of a polyhedral wing?


I've seen some pretty complex math in various articles and forums, and opinions vary even in the RC/DLG/Catapault/Hand Chuck glider forums. Is there ANY reasonably accurate/acceptable rule of thumb for RGs/BGs that doesn't require a complicated equation?

Since he is talking wing span, standard nomenclature would indicate this to be tip to tip. Semi-span is the term when looking at just one wing.

Probably does not matter greatly, but I suspect the greater dihedral angle the less efficient the glide (but more stable). Don't have a feel for how significant the difference is, but I suspect not great.

Rktman said:
Is there ANY reasonably accurate/acceptable rule of thumb for RGs/BGs that doesn't require a complicated equation?
Click to expand...

Use 15 degrees of total dihedral angle. 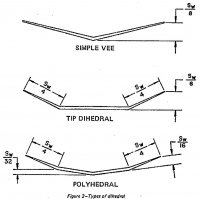 For free flight gliders, the guidelines given in the other Dave's diagram are just fine. Dihedral provides passive roll stability, and for f/f you need enough of that to make the glider track its steady turn. More generally and for RC, it's *very* complicated. For RC, if you're an experienced pilot, you don't really need any passive roll stability; you just need to avoid having it drop a wing and spin. For f/f you mostly don't care about the finer points, because picking good air usually totally outweighs the smaller benefits of making increasingly complicated airframes beyond a certain point. There are interactions with the vertical fin size, wing aspect ratio, and fuselage size (if that's significant). Dihedral tends to cause adverse yaw and reduces overall lift for a given wing area, so competition R/C planes usually don't have very much. Slope soarers often work fine dead flat. Large transport aircraft with big fuselages will have negative dihedral (anhedral) to make turns feasible.

Though 14 to 15 degrees of total dihedral (as Dave’s diagrams give) is a great starting point for three-channel RC (rudder/elevator/throttle) airplanes. Ken Willard used a trick in a bunch of his small rudder-only and three channel planes - put a piece of Sig pre-made trailing edge stock between the two wing panels. Instant 14-degree total dihedral (or something quite close enough).

Or, if you know the length and the desired angle and need the height the formula is: 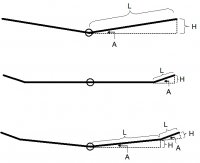