This guy makes a babbit bearing for his, and I hardly know what one of those is, but am trying to get up to speed, which keeps leading me to cool videos, though sadly not much actual pertinent data on the saw I'm working on.
I have finally figured that part out though.
The one I'm fixing up/restoring, is a Walker Turner BN730, 12" Bench Top Bandsaw.
There's really not much to it, and it is hard to screw it up, but for awhile, I knew little about bandsaw construction, so I was afraid to tear it down completely and restore it.
I feel like a fool now, as it is like the easiest machine ever to understand. That means I get to complicate putting it back together all on my own, so I'm taking my time and doing it right, and to MY liking.
[video=youtube;1ffYMlxs9tI]https://www.youtube.com/watch?v=1ffYMlxs9tI[/video]

Rebuilding Babbitt bearings, truly a lost talent. I remember watching an old machinist pouring Babbitt at a local machine shop when I was a kid, 45 years ago. It certainly was a cool place to hang out and watch the old guys fix things. I thought it was such a cool way to fix a bearing although I thought it was old school back then, turns out it was old school. At least in those days things could be rebuilt many times rather than the use and throw away culture we have now.
I guess no one would spend the money today to buy tools made like they used to be made. Don't imagine a 8 year old kid would be allowed to hang around a machine shop today either!

that walker turner looks like it was one well build bench top BS!!
have ya found the old woodworking machinery website yet?
https://www.owwm.org/

tomsteve said:
that walker turner looks like it was one well build bench top BS!!
have ya found the old woodworking machinery website yet?
https://www.owwm.org/

I have come across it, yes.
It is looking like I'm going to have another hobby, playing with old machines, but that's okay since they are just what I need to make rocket parts.


I just registered an account there, so I can join their forum.

Thanks for reminding me about that site. I had only come across it in searches for stuff, but not really looked it over.
Last edited: Sep 28, 2016

It's a breath of fresh air to work on something like this, and I've begun looking at Craigslist for other similar vintage machines to work on.
If I keep looking, odds are I'll find either a great deal or a free something. I have seen some really cool things there for lots of money, but unlike my love for the old machines, finances have defined boundaries.

It ran just fine before, but it looked like my drill press, and needed some TLC.

It may as well be one of my Animals now, but thankfully will not require visits to the Vet.:wink:

The years have not been kind to it, but it's former owners were, and must have loved it very much to have passed it on to me, so it will see kind and fair use in it's later days, and has really inspired in me a desire to learn all the old workings of vintage machinery.
I once learned all the workings and schematics of the Bradley Fighting Vehicle, as a 63M in the Army, and that was a lot of work, but the skills were never applied as I was sent to a Light Cav. Unit that only had Humvees.
Thank goodness for that! I used to be a very lucky person indeed. Nowadays nothing works out without great effort.
The wheel covers will hopefully be finished soon, so I can atleast have the thing fully assembled when the new tires get here, so within the next week I should be using the bandsaw.
The mechanical parts are all trued up, but the wheel covers were just whatevered back together, and they are pot metal to boot, so it was a real bitch to get them trued up, especially given my complete lack of experience working with monkey metal.
It's gettimng done, but it ain't pretty, so the pics' will be of the results, not the work.
Last edited: Sep 29, 2016

TopRamen said:
I have come across it, yes.
It is looking like I'm going to have another hobby, playing with old machines, but that's okay since they are just what I need to make rocket parts.


I just registered an account there, so I can join their forum.

Thanks for reminding me about that site. I had only come across it in searches for stuff, but not really looked it over.
Click to expand...

theres a LOT of people who prefer old arn over todays....ummm..... what-might-be-arn.

Babbitt bearings...a term I haven't heard in 50 plus years.

Thanks for the trip down Memory Lane.

I was going to reassemble everything today, but some of the parts that were fitted were not original, and the bar that links the frame to the tensioning adjuster can't be used, unless you want to not be able to adjust the tension beyond a very small degree, so until I order the owners manual and see what that part is supposed to look like and how it is supposed to function,I can't go any further.
I mounted the table just to get some Idea of what kind of shim I'll need in the table adjustment controls, and that is no big deal, as I have the old shim but will not re-use it, so I expected to have to make a new one.
I will also need a perfectly level surface to work on, and the base for mounting the frame to made, as the legs of the frame are not all on the same plane.
I have to order new tires and a new lower thrust bearing anyhow, so it's not like I was going to throw it all back together and start cutting, so this will give me a break from it for a few days, during which I will conduct research.
I have the final batch of the old hardware in vinegar now, and will wire wheel it tomorrow. I'm glad I saved every piece of the old hardware, as it is quite helpful.
I have already drawn up my design for the new base. It may be a bench top model, but that's no reason that I can't mount it on a dedicated floor base, made of plywood, metal and fiberglass, to resemble the old timey cast iron one piece bases.
I will just build the box around the current base, then make decent access doors on the rear and front for servicing and add a small fan to provide the motor with adequate cool air. I'm trying to come up with a dust collector too, so I can use it indoors without special needs. I may need to make a walk in "Booth", but I will do whatever I must.

I mounted the wheels just for a photo op, but the lower wheel has a hairline crack starting where the key for the shaft goes, so I will attend to that before we even consider mounting it for real. Turns out they used to make the wheels out of pot metal too. It would likely be fine, but I'm going to composite the %^&* out of it with my normal overkill methods first before I actually mount it. The fit is perfect, and a few rotations show that it maintains tracking, but if I don't harden that point now, I imagine I'll feel the pain later. That's another reason why I decided to clean all the old hardware too, to check for stress points and areas prone to failure.
She'll be just fine, and look good doing her job too, but the old girl needs some real TLC, and since I have plenty of time on my hands to dedicate to it, I'm the right guy for the job.

That lower thrust bearing in the third photo was seized up when I started working on it, and had a line though it where the use had taken a toll.
I got it spinning freely with an Acetone soak and some non-chlorinated brake parts cleaner, followed immediately by a water wash and air blast, then WD-40, but the line is always going to catch the blade and wear it down. I'll be replacing it, but if that is too expensive, I'll grind the crap out of it til' it at least works as intended. I'm not above grinding the crap out of things.
Last edited: Sep 29, 2016

Turns out the covers just go on without a hinge, so I don't need to quest for a hinge assembly that does not exist, and I got the manual and the urethane bands in the mail today, so we should be spending some time tomorrow furthering this venture.
I ran out of foam today, both blue rigid and expanding polyurethane, so there won't be any more house work to do til' next month. 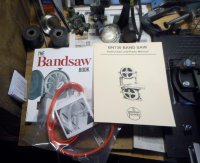 This saw works on a nearly daily basis now, thanks to the wheeled base I asked it to build for itself, since carrying it in two sections out onto the porch every time it needed use was not necessary thanks to the Wheels. I use it to successfully cut circles out of high grade scraps to make pulleys for machines.
A lot of my machines were suffering from low-P. A condition frequently found in older machines when there rate of feed or cuts per minute are not equal to the convenience versus quality equation, but we all lose when that happens.
Just like everything and every organism, there is a "Rate of Feed" and a "Service Life".
Thankfully, we have understood that for long enough now to change the Equation.
I have only been ranting about "The Old Arn" for a few months now, but there are a few folks that really listened up and even helped me find what I was looking for.
I had no Idea I'de need three Jointers to build one stand for one bandsaw????
Things are crazy, but in a good way, as I often have to acquire a new skill to take complete possession of a machine I own already, and in some cases in multiple variants.

Sep 8, 2022
wonderboy
W
J
I built my first Eggtimer device and it was a blast.