I am developing parachutes to recover two mid-power rockets with predicted descent masses of about 140 grams (~5 oz) and 280 grams (~10 oz). On larger rockets I usually make toroidal chutes and use dual-deploy. On these rockets I am going to pop the main at apogee and use flat parachutes because they are simple, lightweight, and fold compactly.

Here are the octagonal parachutes. One is 11” measured flat side to flat side with a 1” diameter hole in the middle. The other is 7” flat-to-flat with a 0.75” hole. 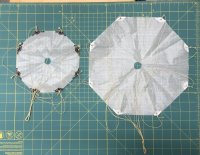 Both parachutes are constructed from ½ oz ripstop nylon to be light. Sorry I don’t know the brand name. It was obtained a while ago when I was making kites. The ripstop was hot cut to prevent the edges from fraying even though they are not finished seams. I hot cut with a wood burning tool, but you can also use a soldering iron with the right tip. I made octagonal templates out of 1/8” hardboard, laid it on the ripstop, and cut around them.

The parachutes have the same shroud line reinforcement. I use a small tab of 3.75 Oz Dacron fabric and a length of 1/16” grosgrain ribbon. I like to sandwich the grosgrain between the Dacron and the sail. 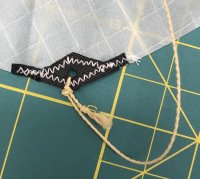 A hole is bored in the reinforced patch with a needle tip in the hot knife. The parachute shroud lines attach there. I am using 100 lb braided Kevlar because it is lightweight and temperature proof. I don’t need that much strength. I also have 200 lb Kevlar that I will use as the shock cord because it will provide additional abrasion resistance and fireproofing.

The Kevlar came from Amazon/Emma Kites.

I used a tautline hitch as the main knot and an extra figure eight to reduce the chance of the end slipping through and prevent fraying. Sometimes I coat the end of cut Kevlar with a glue like e6000.

The finished 7” parachute weights 2.5 grams and the 11” chute weights 4.0 grams. They both fold up very compactly.

The parachute is to be folded flaking the fabric with the reinforcement tabs on the inside. This allows the lines to be placed between folds of smooth panels, reducing the chance of getting snagged on the edge of a tab during deployment.

To characterize the parachute performance I used a car, speedometer, half of a fishing pole, a precisely measured set of lead weights, a friend, and a country road on a nearly windless day. I drove the car and watched the speedometer while my friend told me to speed up and slow down until gravity balanced with parachute drag.

Maybe someday I will get a wind tunnel, of course I would want it to be supersonic because my car won't go that fast.

Here are the unfudged numbers from our measurements:

Plots of the speed vs mass in imperial units follow, as well as the drag coefficient:

The drag coefficient was calculated using the entire area of the octagons. The hole was not subtracted from the area.

Considering the test method, I am pleased with the consistency of the drag coefficient at about 0.92. You should be able to use this to size flat octagonal parachutes of similar construction.

In practice, the rocket’s descent will be slowed by both the parachute and additional drag from the rocket, tether, nose cone, etc. I would like the entire rocket to fall at about 20 ft/sec, so I am designing for the parachute alone to fall in the 25 to 30 ft/second range. Even if the rocket didn’t contribute any additional drag this would be safe for such a lightweight rocket.