Cheap cellular trackers update -- and where are the 3Gs?

In August 2017 I read a thread in this forum entitled "Keychain GPS Trackers" (https://www.rocketryforum.com/threads/keychain-gps-trackers.141846/) that started me on a seemingly never-ended quest for a cheap (under $35), reliable cellular GPS tracker that would work with a free FreedomPop sim card. I've had some success but am still looking for a better solution. Thought I'd recap my experiences in case anyone else would like to try something similar. Important note: these trackers only work if you have cellular service available at your launch site. I've been to every site in Florida and all have good service.

In post #9 of the August 2017 thread, Dugway recommended the MD-601 tracker, which has proven to be my favorite so far, I've bought 3 of them. It is cheap ($26), small, light (22g), and has never failed me, even when more expensive trackers have. You put an app on your cell phone that allows you to track your rocket. Dugway had an issue because his "phone kept shutting down in the 100 degree heat at HellFire when the GPS was active", but I've never had any such issue, even in the Florida summer. The only problem with the MD-601 is that it only works on 2G cellular networks, which in the USA means T-Mobile and its MVNOs. It works fine with the Speed Talk $5 a month sim card, but it does not work with the free FreedomPop sim.

Even cheaper (under $20), smaller, and lighter than the MD-601 is the K8 GPS tracker but caution is required when buying, because some versions of this device only track via LBS rather than GPS. It works the same as the MD-601. It also works only on 2G networks and does not work with FreedomPop. See https://www.gearbest.com/car-gps-tracker/pp_643009.html.

Another popular tracker is the TK102, which is larger than the MD-601, although cheaper ($11). See https://www.aliexpress.com/item/Rea...and-with-One-Battery-Vehicle/32718561171.html. I don't like it as much because it has no app, it just sends the GPS location and a Google Maps url via SMS text message. Again, it is 2G only. One eBay seller is selling something called the TK102D which he claims works with 3G and 4G sims, but it does not, at least not with AT&T, I bought one but returned it. If you use this or any other type of SMS-based tracker, just before liftoff you should command it to send a text every few seconds, so you'll have an approximate position even if the tracker gets disabled due to a hard or water landing.

In August 2017, AT&T had recently discontinued its 2G service, and I wrongly assumed that soon there would be several trackers that would work with 3G and 4G sims like the FreedomPop. I'm still waiting, where are the 3G trackers??? I run Google searches every few weeks and still have not found any. There are many trackers advertised as "3G" but read the fine print and look at the frequencies, they are 2G only. This has to change at some point, but when?

I've seen some rocketeers use the proprietary GPS trackers such as Paby, Tracktive, MindMe, and several others that come with a built-in sim card and require a monthly fee. Some have had success with these, and they probably work fine, but the ones I have seen are substantially more expensive and the monthly fees are a lot more than the $5 Speed Talk.

I finally found an under $35 solution that works with the free FreedomPop sim, at least for larger rockets. All you need is a used Android phone with Jason Cook's free Insane Rocketry app. This is even better than the above trackers because you get flight data in addition to GPS tracking. And if the phone has a barometer, the app even works as an altimeter and lets you know how high the rocket went. And if you can place the phone into the rocket in a position to take in-flight video, you can use the app to turn the video recorder on and off. Of course, the disadvantage is that phones are larger and heavier than a tracker (135g vs. 20g), but this is not an issue if the rocket has a diameter of 3" or more (a phone in a hollowed out pool noodle is a perfect fit into the payload tube of a 3" rocket). If you don't have an old Android phone lying around the house, for $30 or so you can pick up a Google Nexus 4 or a Motorola Droid Mini on eBay, these and others have a barometer and work well with Jason's app. Also, if for any reason you do not want to use Jason's app, you can locate the rocket by going to https://android.com/find.

The best I've been able to find so far for a small device that works with the free FreedomPop sim is the Posh Micro S240, which is a fully functional Android phone with a 2.4" screen. It weighs just 50g and is almost as small as a tracker. The screen cracked as the result of a hard landing but it is still fully functional. The Posh used to be sold brand new for $50 shipped but it is no longer in production. I'd buy another one or two if I could find them for a decent price. There are other phones just as small as the Posh such as the Melrose S9 Plus and the Unihertz Jelly Pro, but I have not tried any of them.

I also use a Telemetrum and a Missile Works T3, which have their own transmitters and do not require cellular service. They also work great, but they cost a lot more.

That's been my experience, any thoughts? If anyone has seen any other interesting GPS products, please advise. 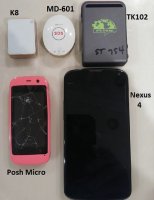 Jason told me recently he is working on an external, bluetooth barometer to be used with the Insane Rocketry app if the phone does not have an internal barometer. That will be nice, although perhaps easier just to use a Nexus 4 or 5, or another cheap Android phone with an internal barometer, which gives you GPS tracking and an altimeter with flight data.

For what it's worth, I've used the TK-107 (3G) tracker for about 3 years (TK-102, which was a 2G design before the TK-107) and love both of them. AT&T stopped supporting 2G, so I had to find a 3G unit, and it works perfectly. I even flew it in a 10.5' tall, 5.5" diameter rocket with an L-1395 motor with no problems. It's a simple design with only two components: the tracker that goes onboard the rocket and my cellphone to call the tracker and get a SMS message back with LAT/LON coordinates and a pin dropped on Google Maps that I can get directions to the landing site for recovery.

If you're going with one of the 3G units you might want to keep an eye on the 3G sunsetting dates. Verizon is going dead at the end of the year, but these trackers are all GSM so that's irrelevant. AT&T is sunsetting at the end of 2021, Sprint at the end of 2022 (but they're not GSM either), and T-Mobile hasn't announced a date yet. I would imagine that most people using these devices are on AT&T due to coverage issues, so you'll get about two years out of them.

cerving said:
I would imagine that most people using these devices are on AT&T due to coverage issues, so you'll get about two years out of them.
Click to expand...

Chris,
Have you ever thought about selling an "Eggtimer Cellular" that would track rockets like these devices do?

And does anyone know why there are not more 3G/4G trackers? Is the technology of the 2G trackers so hard to upgrade?

A LOT of launch sites have poor cellular reception. Point-to-Point is a better solution... it works everywhere without any additional infrastructure.

cerving said:
A LOT of launch sites have poor cellular reception. Point-to-Point is a better solution... it works everywhere without any additional infrastructure.
Click to expand...

A lot of launch sites have no cellular reception, particularly in the west. Here in Florida, I've been to every major club launch site and have had good cell service at each.

At a launch site with decent cell service, it seems debatable whether point to point is a better solution. At least for me, cheap $20 cellular trackers have found rockets even when expensive point to point trackers (e.g., $300 TeleMetrum) have failed (I usually have one of each in my more valuable rockets). The signal from a point to point device can be lost if the rocket drifts too far away or goes behind a hill or other obstruction, but as long as there is cell service a cellular tracker will get you to the rocket.

In any event Chris, I'll be a customer if you ever develop a 4G Eggfinder.

Both point to point and cellular trackers will stop working if the rocket lands hard or in water, which is why I prefer real time trackers to the TK trackers used by Sam and other devices that require you to send an SMS to the tracker to get the position. A real time tracker will at least give you the rocket's position shortly prior to impact.

Featherweight Tracker - Some iPads don't have a GPS so can't be used for tracking...

How to Record the iPhone screen while using iFIP (Featherweight Tracker)