Yes, they were E engines! Yes, I need to work on my handwriting!

I'm trying to figure out what is going on with your data summary and the altitude/velocity plot on the online log. Something in the data is really messing with the plotting routines there.

When I download and plot the data in MagicPlot the altitude plot looks reasonable and plausible. How was the Mini carried in the Boosted Bertha? From the noise in the descent data it looks as if it's hanging out in the breeze and swinging around pretty good and maybe getting some serious sunlight on the pressure sensor. It also looks as if the sustainer found a place to land that was ~50 feet higher than the launch pad.

Here's a quick and dirty altitude plot. The acceleration data are puzzling me some....which leads me again to ask how the Mini was carried. 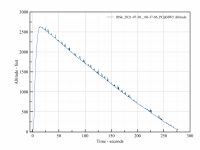 What happened to pad #3?

Cape Byron said:
What happened to pad #3?
Click to expand...

It's a mystery to me too! lol That's why I always picked the right hand side of the pads - less confusion (and they launched from left to right, and that gave me plenty of time to get ready!)

Bernard, I really appreciate your analysis! Thank you very much. The Mini was attached to the parachute anchor point / loop a few inches below the nose cone - alot like the way I did it on my V2: (attached to nose cone instead)

The Bertha has 4 1/16 " holes in body tube just below the bottom of the nose cone. 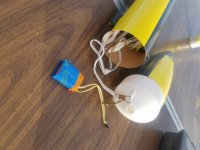 If Mr BEC is confident in the apogee numbers - I'm officially declaring this my personal best!! All other 5 flights, the Mini performed nominally.

Huxter said:
If Mr BEC is confident in the apogee numbers - I'm officially declaring this my personal best!! All other 5 flights, the Mini performed nominally.
Click to expand...

At first I was skeptical of the altitude you reported (knowing what I've been getting with my Boosted Bertha with 18mm motors) but after thinking about it a bit, and especially after downloading the Mini data and plotting it (since the plot in the online log is clearly hosed up by something) I would have to say it looks plausible. The plot clearly shows the delay was a bit short....but then I'd expect that considering what you were doing. The accelerometer data show the actual delay was ~7.9s so well within tolerances for a nominal 8s delay.

Clearly your attachment/protection method allows the Mini in that case to swing and bang around quite a bit during descent, which is the source of all that rippling in the altitude trace during descent. It's interesting that whatever it's doing tends to cause low-pressure spikes, which show up in the graph as spikes in the upward direction. But now that I think of it, that's what I usually see when I have one swinging around under 'chute as well.

It was nice to see the booster tumbling down in the video. Mine does this as well, but when the Boosted Bertha was first introduced there were people here who were convinced it would streamline in every time....and it doesn't. Instead it works exactly as it should.

Congratulations! I see what Bernard means. Gotta play with the graph a bit to get it to fit. I use my fingers on a touch screen laptop. The mouse is mostly worthless. Looks like it hit thicker air around 800ft with a slight deceleration. The velocity noise increased and the altitude noise decreased. I wonder if the case made a consistent up/down motion in contrast to the lighter pouch that might flop around more in the wind.

How were you able to find the sustainer? I imagine it involved the use of an Overthruster!

I'm glad you were able to get the graph to look relatively OK. I'll need to try harder.

Of course he got the sustainer back...otherwise no data....

I was able to get a reasonable view of the altitude graph on the online log on my iPad. Here on the Mac attempts to stretch only the vertical scale of the graph causes Safari to instead show me a sort of favorites screen. Maybe I can figure out how to suppress that behavior.
Last edited: Aug 2, 2021

That looked like a lot of salt to be looking for a Big Bertha rocket from 2631ft. Too bad the app didn't collect the wind data. Could the relatively small sustainer be seen coming down from such a height?

One time, I downloaded the data from the rocket in a tree. When we finally rescued the rocket, the altimeter was nowhere to be seen. It was probably dead by then anyways. I did rescue a cam from a rocket in the tree. I didn't get the flight video but did get 90 minutes of it sitting in the tree before it turned off.

I've gotten data from treed rockets two or three times—from FS Minis and once from an AltimeterThree—but have always gotten the devices back (though I left half of one of those rockets in the tree). I've also occasionally gotten apogee data from FS Minis as a model was descending if it happened to drift close enough to where I was standing as it was coming down.

I can't imagine the Boosted Bertha getting treed on the salt flats, though....

I did lose a Mini when the masking tape failed on the acrylic cargo bay taking the altimeter with it. I used the Bluetooth to help locate it. When it connected, I knew it was within 20 feet of me.
You must log in or register to reply here.
Share:
Facebook Twitter Reddit Pinterest Tumblr WhatsApp Email Link