I'm looking at trying my first two stage project and selected the first boosted Arcas as a model to emulate. Lots of good kit models of the HV sustainer although I found what appears to be an odd artifact in the first boosted version. I've seen photos of the first boosted version that have the extended fin profile common to all of the HV variants but it retains the boat tail rear end of the single stage version. I've added my project inspiration photo below. I'm curious as to how the interstage coupling was accomplished with the pictured arrangement and how best to incorporate it into a one half scale model. I'm using the 2.2" MAC Performance kit as a base for the HV ARCAS and I had an extra boat tail in the parts bin that fits that body tube and a 29mm motor mount. The museum displays I've seen of the single stage Arcas also have a flare at the end of the boat tail, a detail the Semroc version includes in their model. I'm at something of a loss as how that seats in the interstage on the booster. I'm thinking a flat ring at the top of the interstage of the same external diameter as the body, with a stepped inner diameter, the outer part for the boattail flare, and an inner diameter just larger than the motor retainer. I'm planning on using a slimline retainer to keep the outside of the retainer as small as possible. I figure this would allow for a seating ring that measures 1/2" thick ring with the same height divided into the two steps. Small pins set into the flare or raised notches at the fin roots would prevent rotation between the two stages prior to drag separation. I'm going to prototype the interstage before I go anywhere else on the build since that's the challenge I don't have worked out yet. This group definitely has members more experienced than me at this and I wanted to get some input to aspects I may not have considered. I've seen the NASA report on their sounding rockets that's cited in a number or ARCAS threads and that really falls short on design specifics. I'm surprised to see that no one seems to have done the build I'm contemplating, unless the early two stage design was abandoned after limited launches because it just didn't work very well. At any rate, input is appreciated.

I managed to find a single historical photo of the booster for the first generation Arcas. Definitely not a simple, bayonet style connection. The picture shows friction fitted clips that extend up the fin roots. The approach clearly worked, but I don't think I can duplicate that structure for my project. I also found the original booster was designed to fire in conjunction with the sustainer. That's not something I'd like to see in mine. I've opted for the Boosted Arcas II design instead which is far simpler of a build and more flexible. Both stages can be made for motor or electronic deployment and it sims stable with almost every 38mm to 29mm motor combination. I got started on the construction this weekend and the sustainer is coming along nicely. I'll see about getting some build photos posted I will say that I love the MAC Performance phenolic canvas. Machines very cleanly, sands easy and is not far behind fiberglass for strength. I can see that stuff becoming a new favorite for future builds.

Finally making some progress on this as a build instead of just a concept. Construction on the internal components for the sustainer is moving along and I got the interstage coupler fitted. The fit is a touch snug still but I'll do the final adjustment for that when I have the booster section finished. I'm really happy with how it turned out. Now I'm on to setting the location for the internal electronics in the mid body bay. I went with a Raven to handle the sustainer ignition and back up ejection charge. The booster electronics have simpler demands so my Missileworks RRC2 will handle that. Here are a few photos of the build as it moves along. 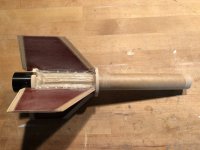 Moved on to the booster section this weekend. Similar construction methods, just with LOC plywood and tubes. I did a fiberglass lamination on the tubes to cover up spirals and to add some rigidity. Fins got edges beveled and a layer of fiberglass as well. Everything fit up nicely and is rock solid. I used an Additive Aerospace sled for the AV bay. Still on working on mounting charge wells, but in a happy accident, the banana plug jacks I had left over from my launch controller work perfectly for the electrical connections. Getting close to where this turns into a rocket instead of a bench project.

I've been doing some fix-up work on my scale drawings this month, trying to get them all in shape for an eventual RotW V, and I stumbled into a subject that I had forgotten I'd drawn. I remember someone asking about the Boosted Arcas some weeks ago, and I see this thread is revised, so I hope this is of some interest.

That was exactly what I was looking for at the start of this project but couldn’t find. Thanks for putting it out there. If I ever consider a new version (read bigger) I may have to try this configuration.

PeterAlway said:
I've been doing some fix-up work on my scale drawings this month, trying to get them all in shape for an eventual RotW V, and I stumbled into a subject that I had forgotten I'd drawn.
Click to expand...

The upcoming ROTW V is great news . . . Will all of the Supplements be included in it ?


QUESTIONS about the Interstage on your drawing :

( 1 ) Do you have dimensions for this section ?

( 2 ) Do you have any photo's of that particular Interstage, as it looks very different from others I have seen ?

Honestly, I drew that a couple of years ago--I didn't remember drawing it, let along the process of sorting it out. I may re-examine it later.

PeterAlway said:
Honestly, I drew that a couple of years ago--I didn't remember drawing it, let along the process of sorting it out. I may re-examine it later.
Click to expand...

Looking forward to whatever you find.