In the 5th photo, the moon is at lower right. 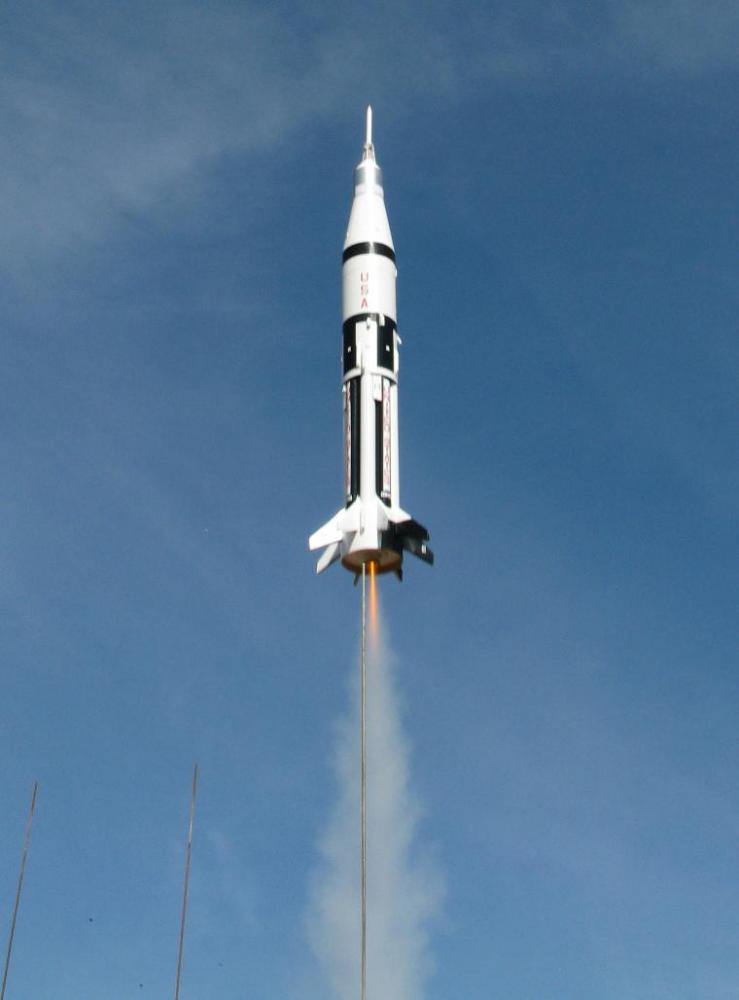 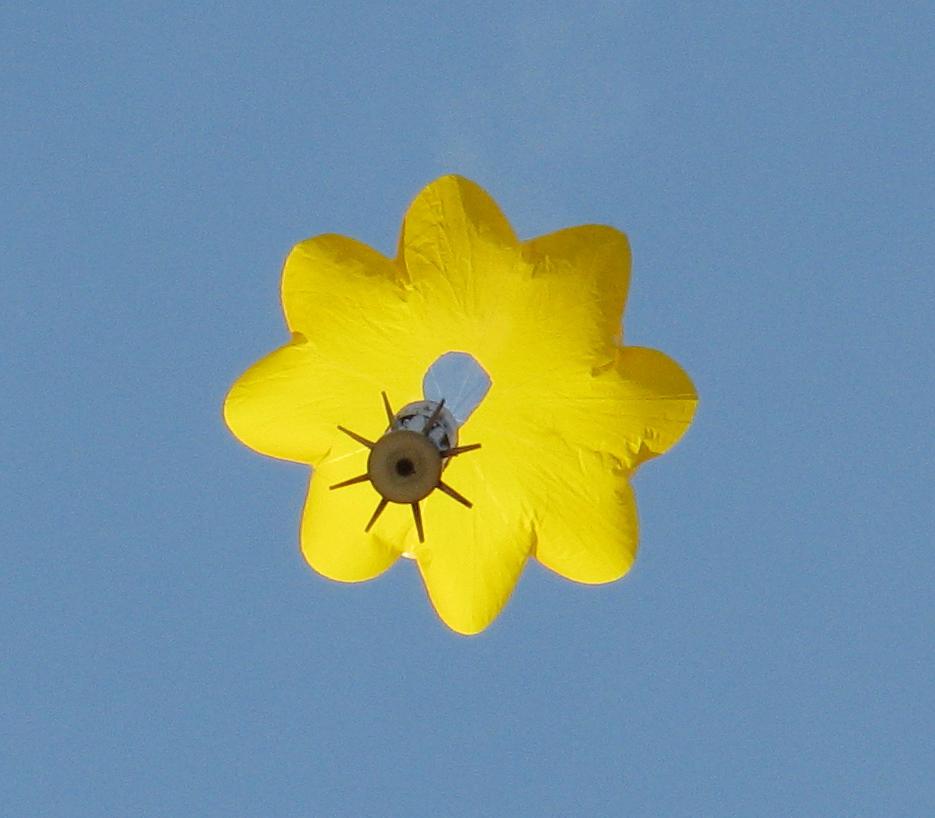 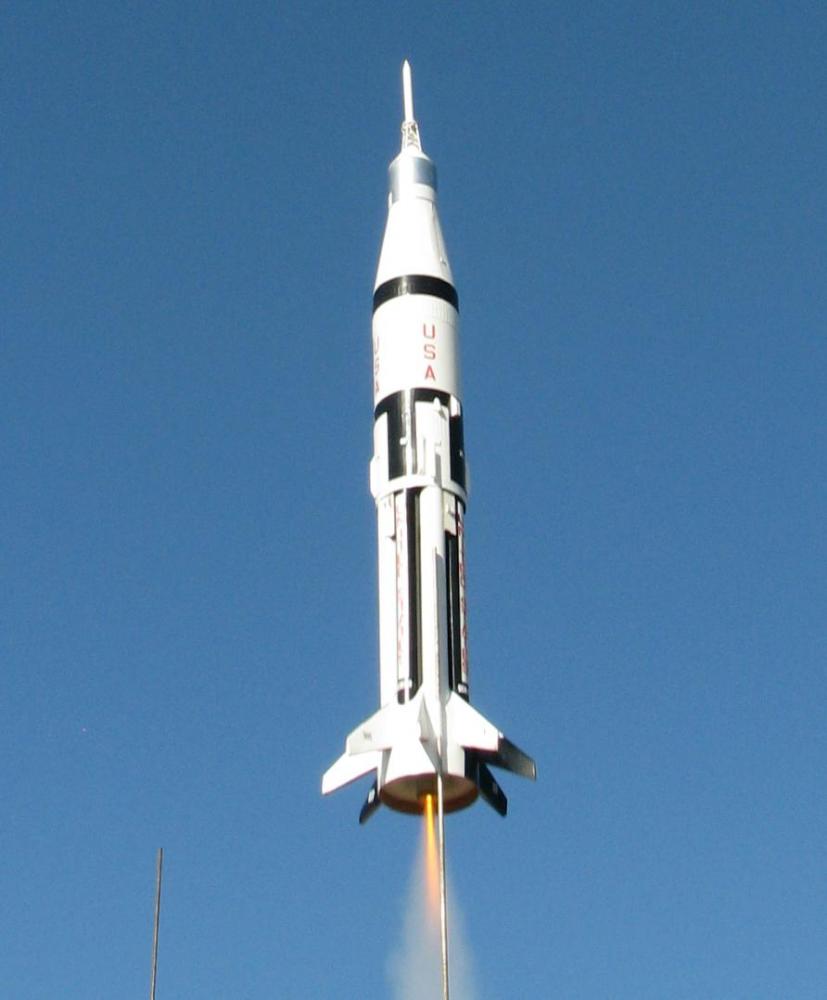 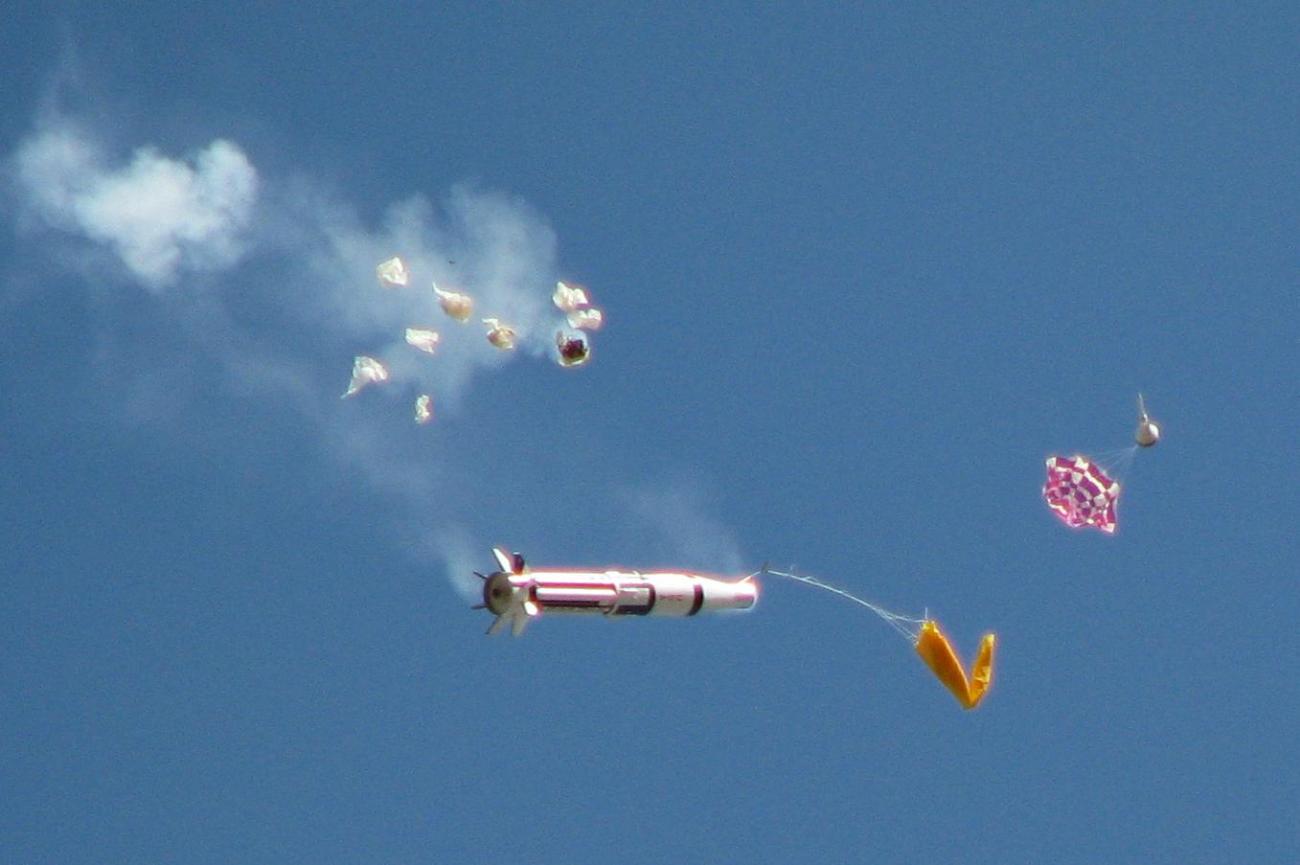 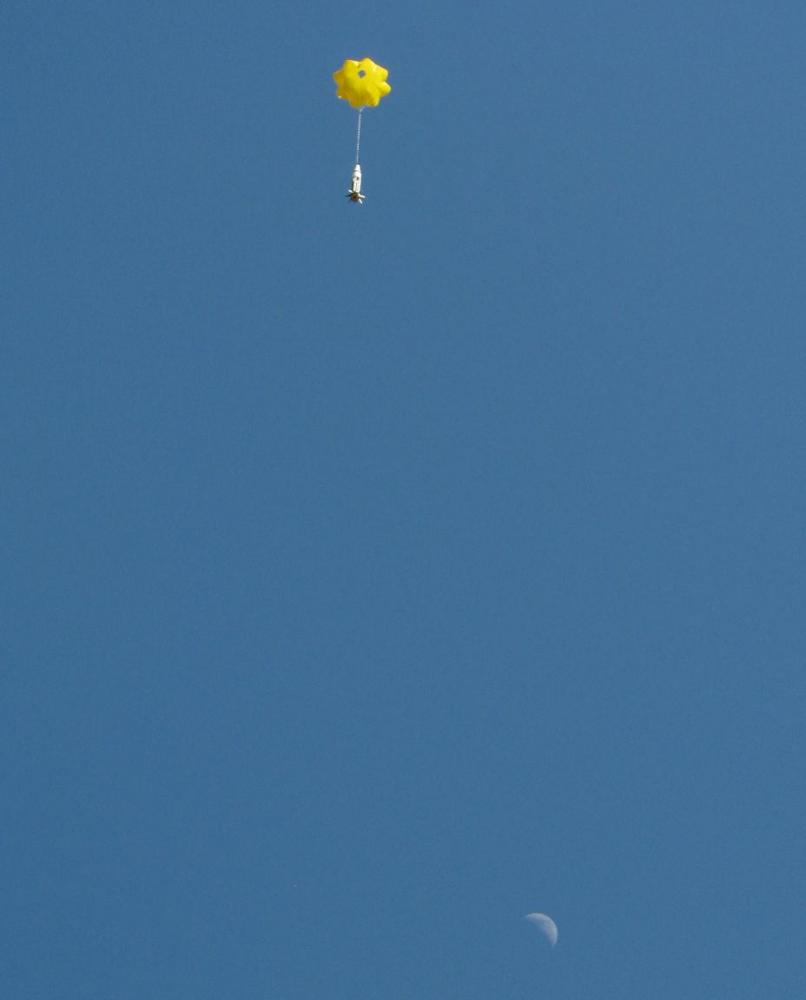 1st photo - Jonathan Dill about to fly his Oracle, Ron Witherspoon, and BRB President Suzy Kraft. At right is the Big Bertha model by Steward Jones.

3rd photo - Two similar rockets using different C engines. On left, Suzy Kraft&#8217;s Quest Penetrator rocket on a Quest C6-3 (which is like a C3 or C4). To its right, Steward Jones&#8217; Quest Super Eagle on an Estes C6-3. Very much the same size (35mm dia) and weights. As expected, Steward&#8217;s rocket with the Estes C6 took off faster, but Suzy&#8217;s rocket with the Quest C6 had a longer burn time. Both flew very close to parallel flight paths. So it was a GREAT visual demonstration of the difference between the thrust curves of the two different engines in nearly identical rockets. 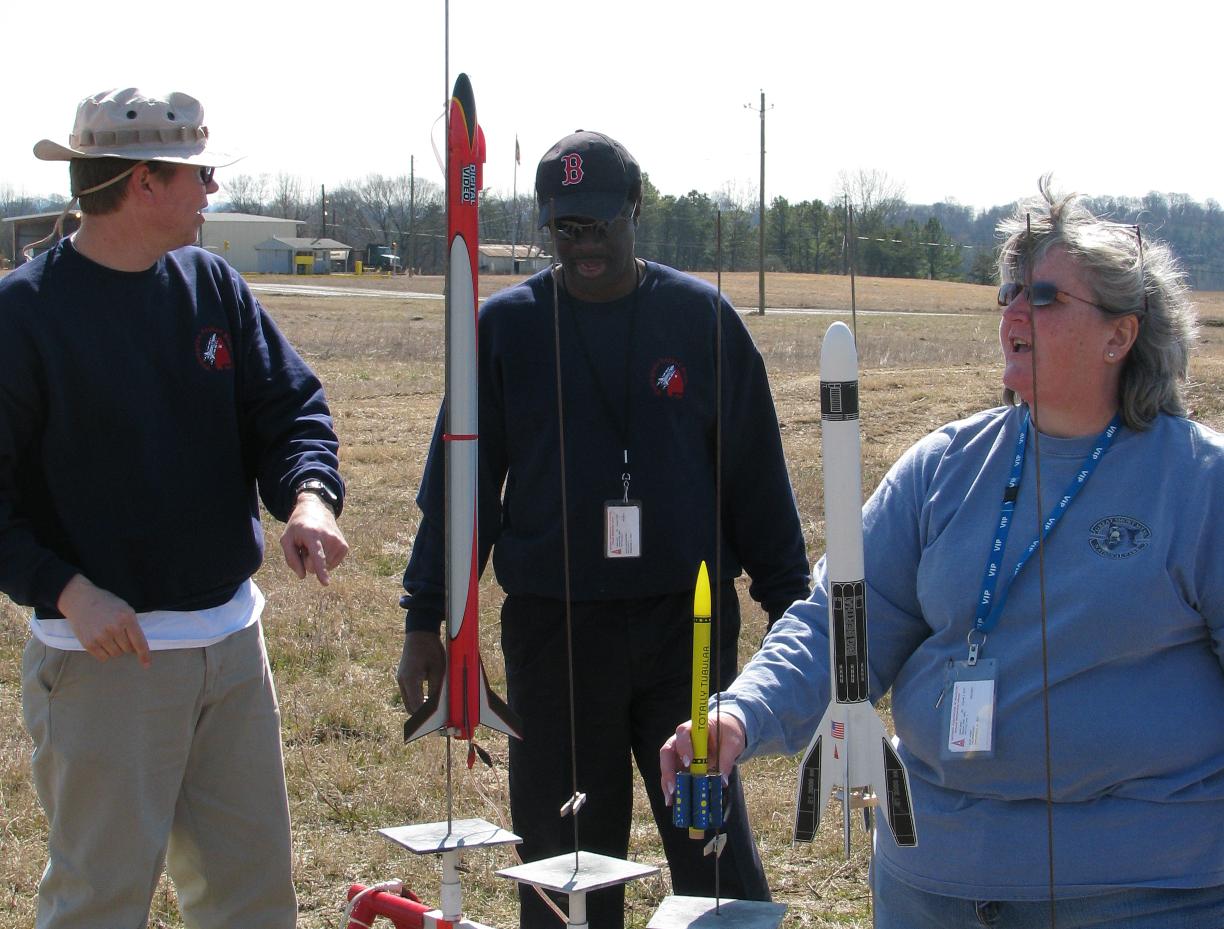 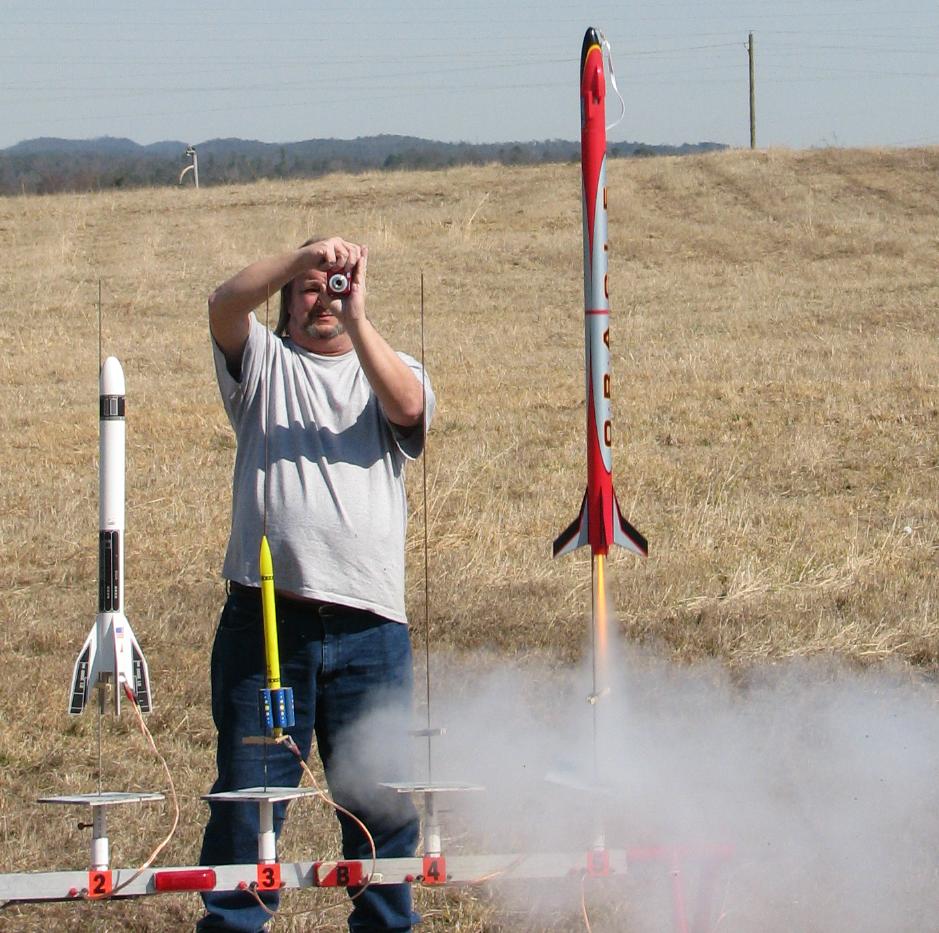 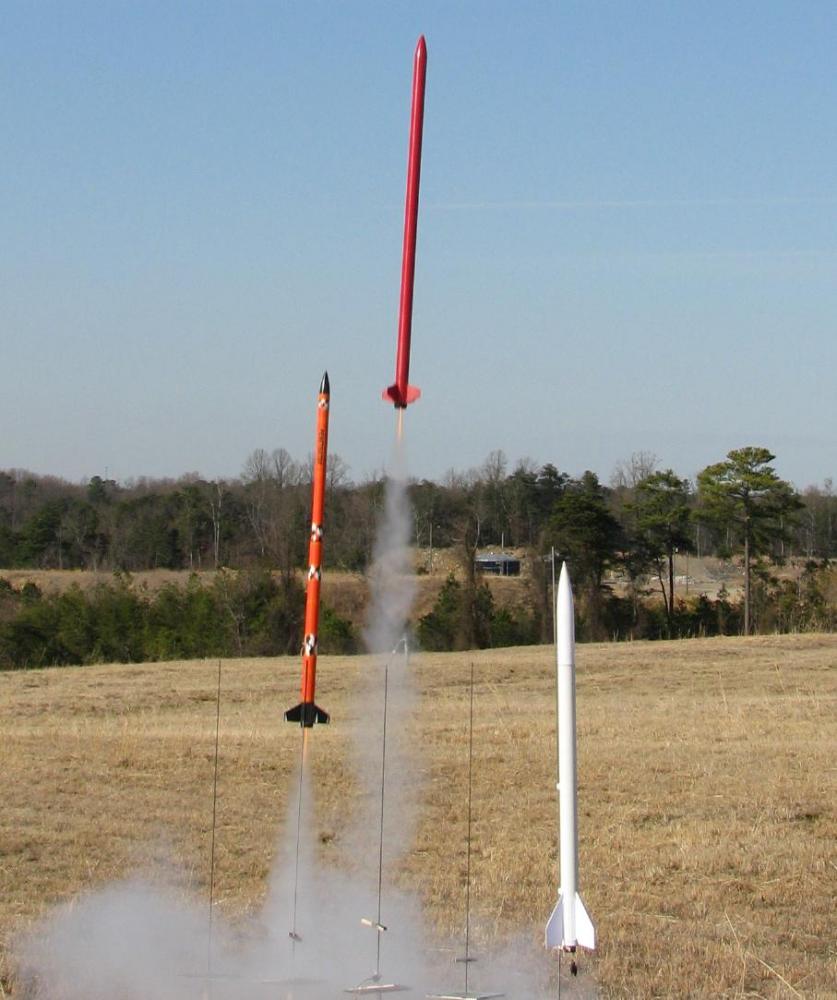 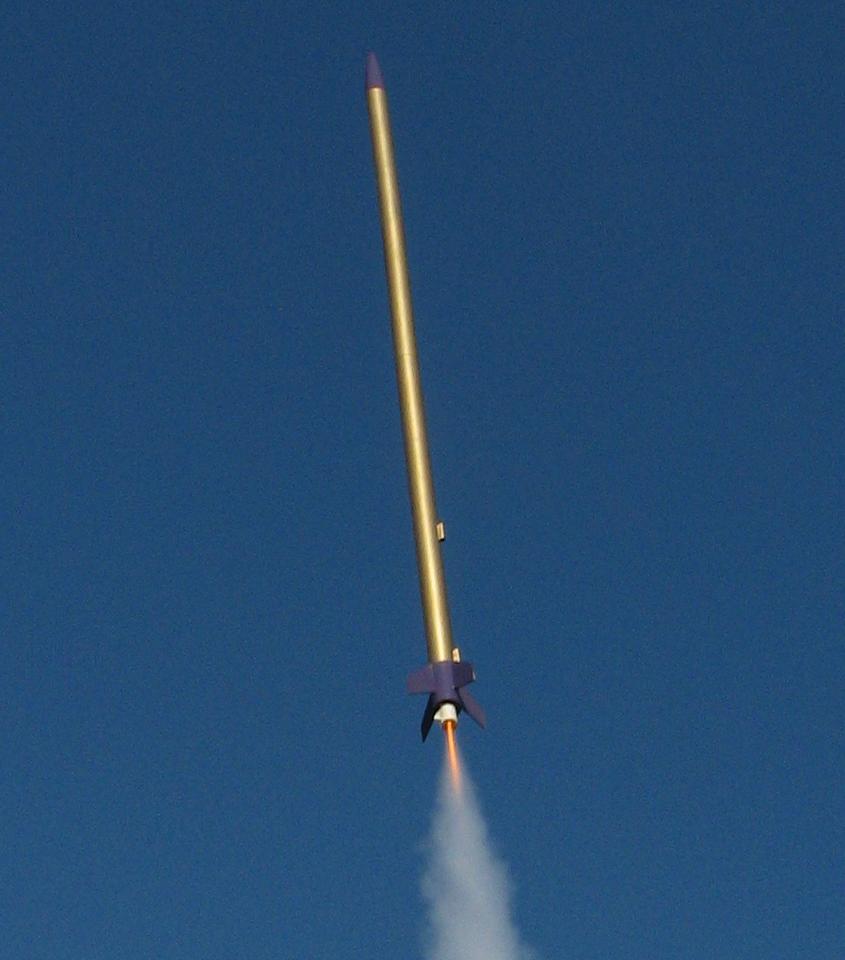 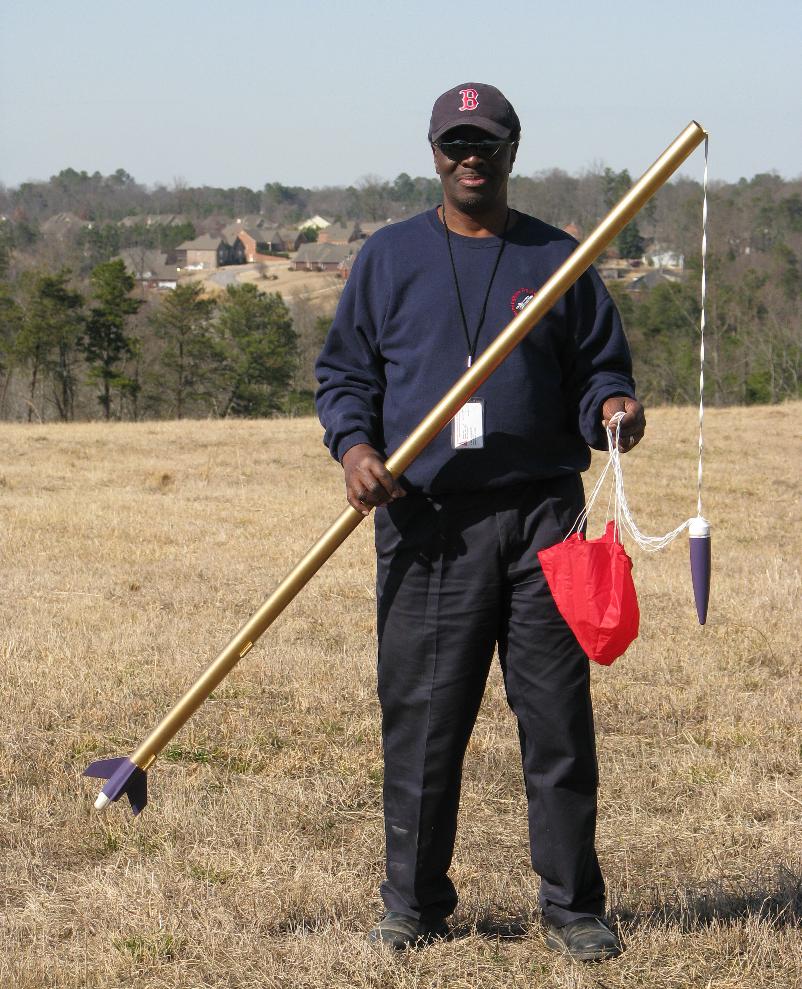 2nd photo - Boilerplate for a 1/110 shuttle kit. Not much progress lately on turning it into a kit, but I hope to get it back on track soon.

For more photos from this launch, go to:
https://birminghamrocketboys.com/BRBGallery/main.php?g2_itemId=131485

For those who live close enough to consider attending our launches, the next launch will be March 20th, at Jemison, AL.

And April 17th will be our biggest launch of the year, the &#8220;Birmingham Blast Off&#8221; launch at the North Birmingham site. 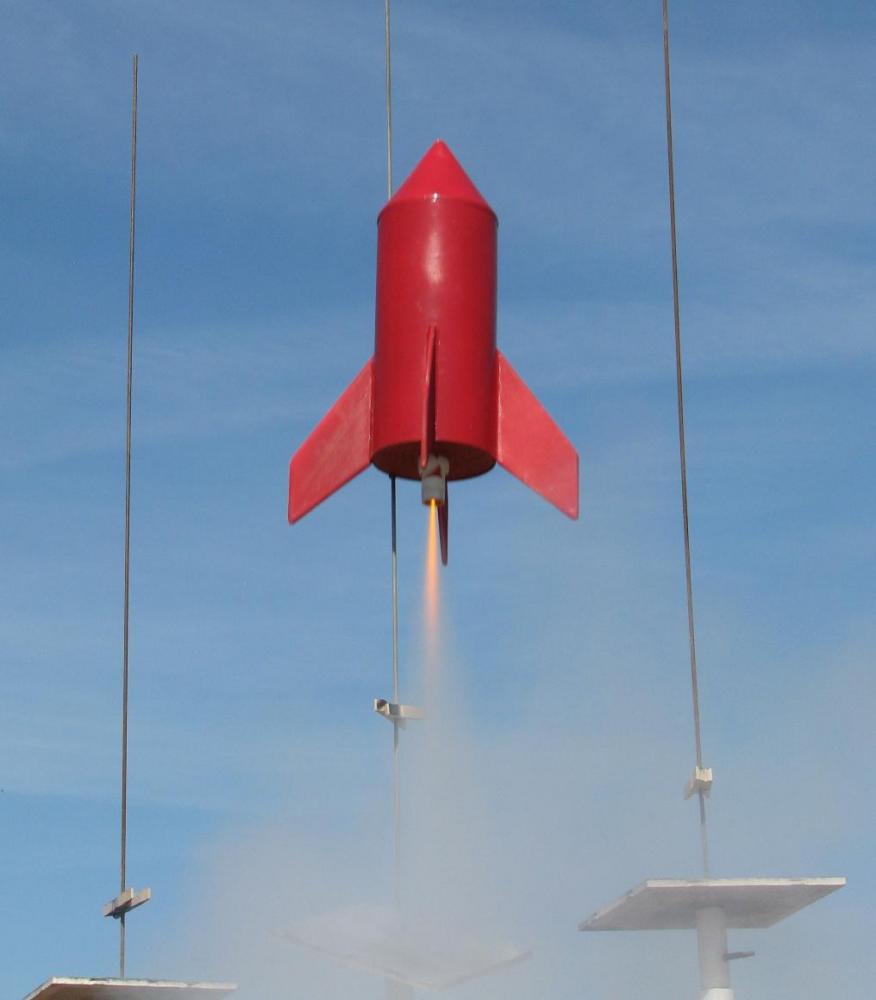 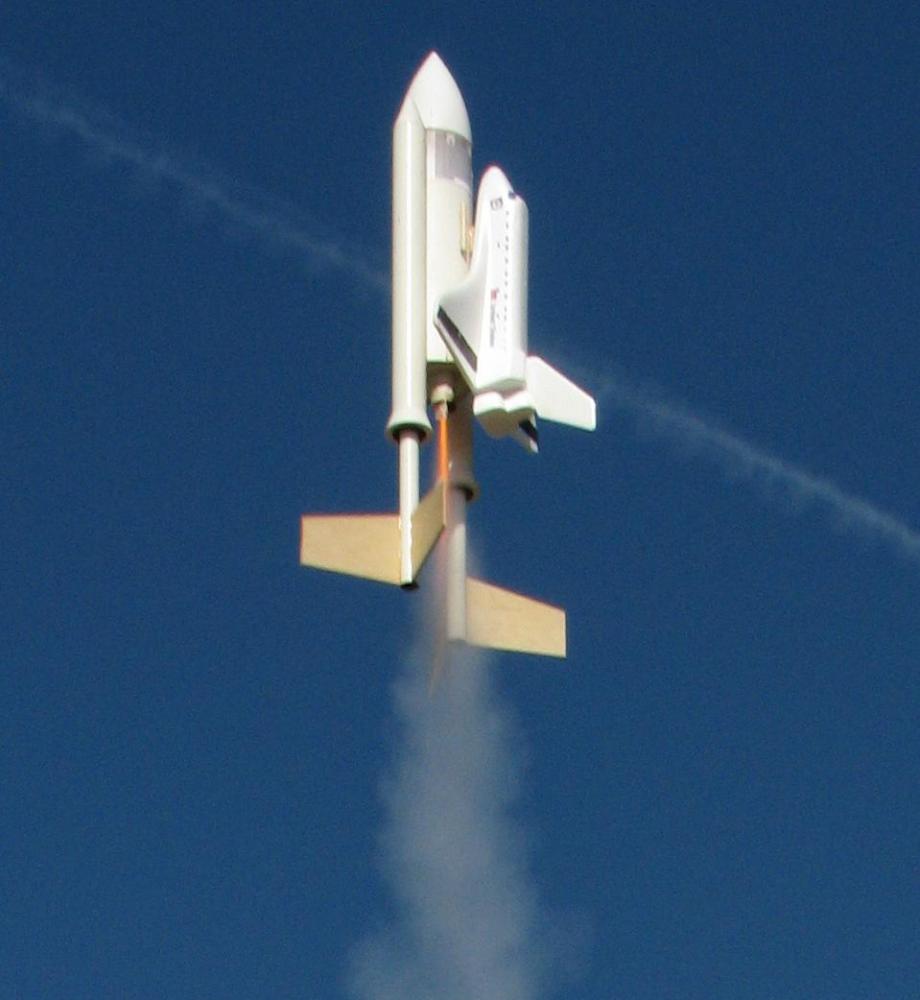 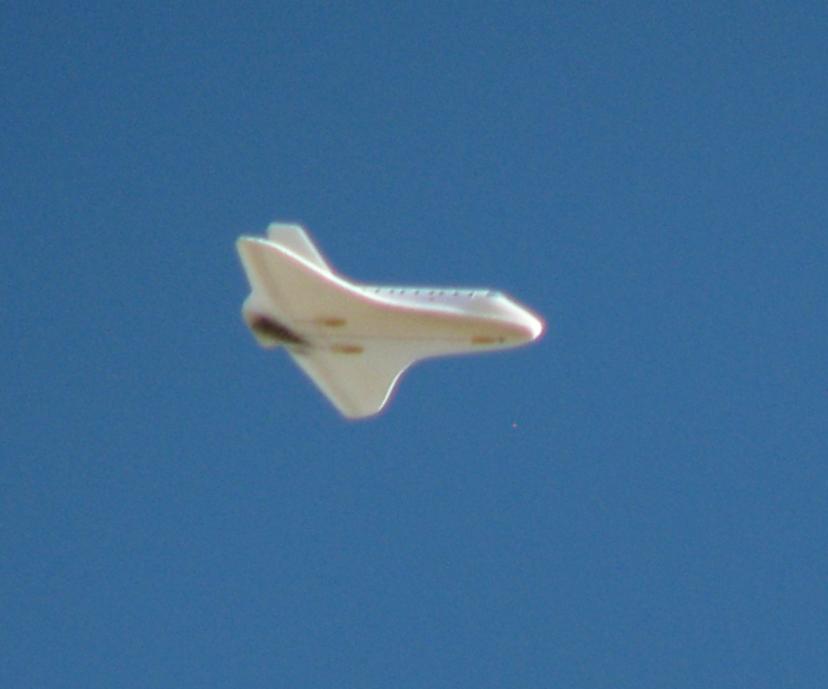 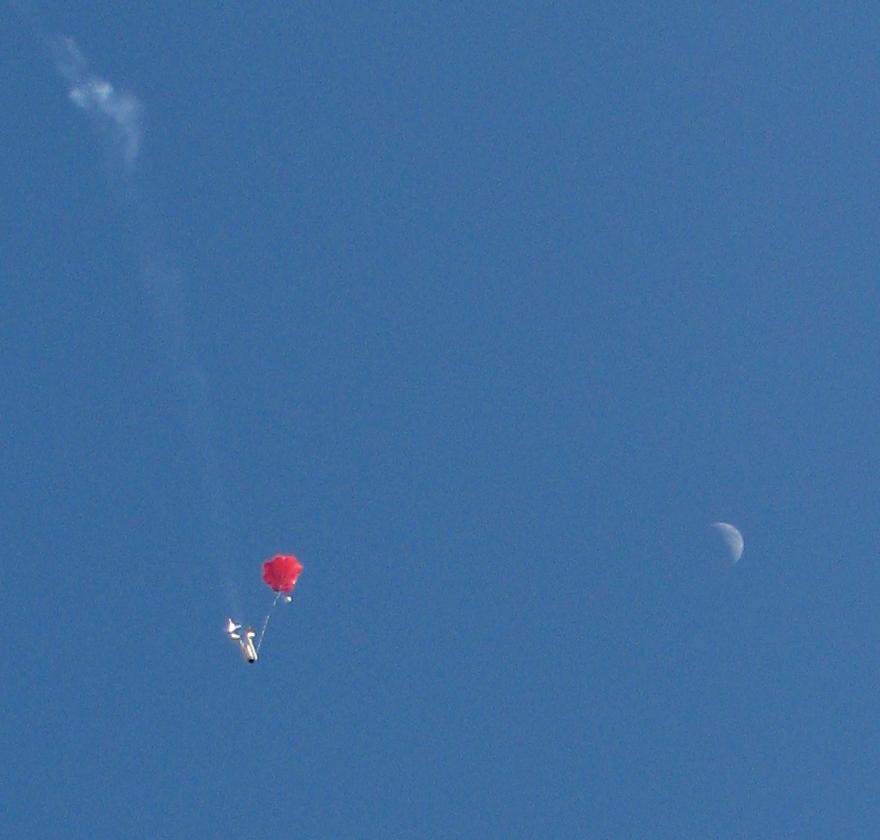 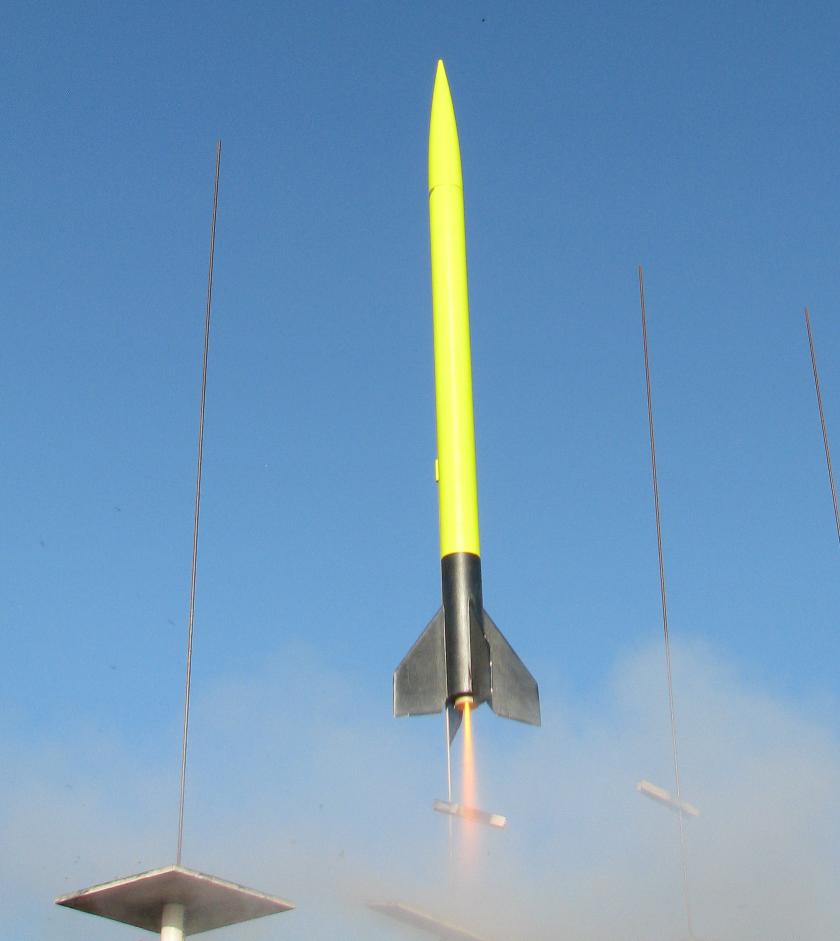 Must be nice to launch in February. We're having a very mild winter and had a couple of really nice days, just can't out to get a few rockets up.

Waiting for the weather to change here in Indianapolis. You make me anxious.

Our December launch was very cold, with 10 mph winds that made it worse. And the January lauch (postponed a week due to rain) was almost as cold, with winds of 15-20 mph that made the wind chill colder, and the rockets drift away more. And overcast at both.

That clear blue sky helped make the photos turn out better, and also the sunlight made it feel warmer than just the air temperature.

It must have been a fluke... It's cold as all get out again.

Actually it was a great day for flying... I flew more that day than I have in a while... Great to get the spirits flowing again...!!!

Steward
You must log in or register to reply here.

Advice for building/launching rockets with a girl scout troop?
2 3