I am fixing up an old half trashed Estes Loadstar II rocket which has a clear payload section.

The nose cone and coupler were attached to the clear payload tube with scotch tape by the original builder. [That is what it says to do in the instructions.]

I plan on repainting the nose cone and coupler glossy black, and then - somehow - attaching them to the clear payload tube. I can't believe there isn't a better way to do this, but I am stumped!

My goal is to make it look like it does in the pictures, but w/o using scotch tape. No matter how clear that is, it going to look crummy, 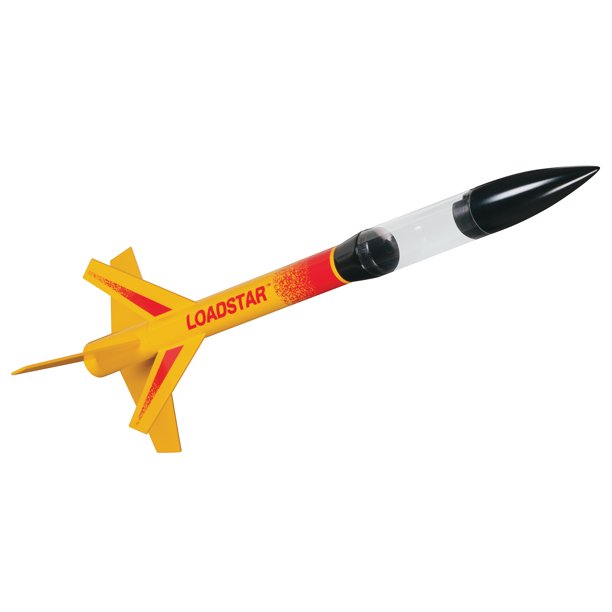 2. Use small reusable plastic rivets to hold the payload section together instead of tape or glue. The rivets still show but, to me, the look like they belong there.

2. Use small reusable plastic rivets to hold the payload section together instead of tape or glue. The rivets still show but, to me, the look like they belong there.
Click to expand...

If you don't paint the upper shoulder of the transition (but the tube instead) you can use "canopy glue" — Pacer Formula 560, or Evergreen Plastics canopy glue (Hobby Lobby has it) or similar — to glue the plastic tube to the balsa coupler. Beacon Fabri-Tac and Foam-Tac will also work for a joint like that. Those might even work if the shoulder is painted....but I've not tried that combination

Or — the really old-school way is to stick some self-adhesive paper on the inside of the payload tube and glue THAT to the shoulder of the transition.

Oh.... right. And I have one of those kits in my stash somewhere....I don't know why I thought it had a balsa transition.

Actually, though, either type of adhesive (aliphatic like Formula 560) or one with an acetone solvent (the Beacon products) should still work. I think I'd go Beacon if I were doing this one myself. I have been also known to use Scotch Multi-Task tape to build up shoulders for a firm friction fit in situations like these, sometimes along with a Beacon adhesive...such as on the Green Eggs and Olympus egg-lofters that are current Estes products.

First... I seal the bottom of the transition. Because in tests, I've had payload sections not blow off because the nosecone blew off first. When I say seal, I mean that it is a watertight seal. If the aft transition is made from balsa, a simple disk of paper (with contact info written on it) is glued to the bottom of the transition, and sealed with PVA glue (it helps to test your glue and inks first (as I've found some glues act as a solvent to ink)) will work. For plastic transitions, I typically use scrap balsa, and superglue it to the bottom of the transition, then shape it to remove any edges that can snag the shock cord or a parachute line. Then I use super thin CA to harden the balsa and ensure that no air can get past it (I've had failures in tests when the balsa wasn't sealed too). I'll often drop a few small pieces of balsa inside the transition, and using a few drops of gap filling CA secure them inside it. This provides an additional layer of sealant, and prevents a slight knock from breaking the lower section of balsa off. The result is, any knock that would remove the seal, would also likely destroy the part.

To stick the clear payload tube to the aft transition, I apply small self-adhesive tabs (similar to the old (Avery brand) dots that Estes used to supply with their kits, prior to the parachutes being premade. to both the inside of the payload tube, and to the shoulder of the transition. Then, using Elmer's glue, I glue the sections together. If I ever need to separate them, I can just soak them in water until the glue fails. With forethought and careful application, you could, however, make the tabs interlocking and thus the joint would be a twist-lock joint (which would work for the nosecone to payload tube, eliminating the need for tape up there).

57 years ago I used rivets made from sewing pins on my Estes X-Ray.

....and actually that could work with a blow-molded payload adapter, too....as in the OP's case.

Estes Goblin - that fragile loop on the nose cone

What are these things on my BT-60 Plastic Nose Cones?

To deploy at coupler (eBay) or nose cone