2021 Atlantic City Airshow Returns to Atlantic City The Greater Atlantic City Chamber is pleased to announce the return of the Atlantic City Airshow “A Salute to Those Who Serve,” presented by GEICO on Wednesday, August 18, 2021. The 18 Annual event will feature the U. S. Air Force Thunderbirds as the headline act. “We are thrilled to host the 2021 Atlantic City Airshow and we are so grateful for our partners and supporters who have returned to help make all the moving parts of this event come together and run smoothly,” said Greater Atlantic City Chamber President, Michael Chait. “The marketing firepower and reach of Meet AC and the graciousness of Borgata to once again provide rooms for the performers enable us to once again put on a first-rate show.” th Privacy - Terms The U.S. Air Force Thunderbirds are debuting a new demonstration to the public for the first time in nearly 40 years during their 2021 performance schedule. The new demonstration comes after the COVID-19 pandemic cancelled a majority of the 2020 season, giving the team time to enhance their maneuvers. The performance centers around emotion and entertainment, while still showcasing the complexity, challenge and capabilities of the F-16 Fighting Falcon and the men and women who fly them. The U.S. Airforce is also sending the F-22 Raptor Demonstration Team to the Atlantic City Airshow. The F-22 Raptor is the Air Force’s premier 5th generation fighter aircraft. Its combination of stealth, supercruise, extreme maneuverability and integrated avionics represents an exponential leap in warfighting capabilities. The Raptor performs both air-to-air and air-toground missions that are vital to the 21st century Air Force. The United States Army Parachute Team, commonly known as the Golden Knights, will also be returning to the Atlantic City Airshow. This performance consists of demonstration and competition parachutist teams drawn from all branches of the Army. The Golden Knights demonstration teams perform several types of shows, each is performed to exacting standards of practice but tailored to the specific venue. These shows range from jumpers exiting the aircraft and landing in a majorleague stadium, to longer aerial displays. The Mass Exit show consists of multiple jumpers exiting the aircraft and forming a geometric shape, often with smoke canisters employed for additional crowd effect. Also returning are the GEICO Skytypers Air Show Team. The team flies six WWII era aircraft, the North American SNJ and the T-6 Texan variant. Both were used as advanced training aircraft to prepare pilots of “The Greatest Generation” for WWII. The team performs a low-level, precision demonstration that features maneuvers and tactics flown by the United States military. In addition to air show performances, the team “skytypes” giant messages in the sky. Five aircraft fly in a line abreast formation and type dot-matrix style 1,000-foot tall messages that can be seen for 15 miles in any direction.
L

Was on vacation last week at the Jersey shore. Wednesday was a fabulous day at the beach watching our military show off their toys. Here are some pictures we took – paratroopers hitting the bulls eye on every landing, Ospreys, P-51 which flew some tandem with the F-22, Thunderbirds. The Thunderbirds precision was impressive but the star of the show was the Raptor – it turns on a dime or can just hover in place. Just a guess here, but it seems if the Raptor were put on a launch pad it could pull off a vertical launch. Maybe someone will build a Raptor inspired model rocket someday. 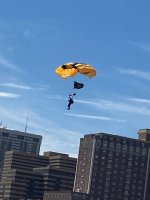 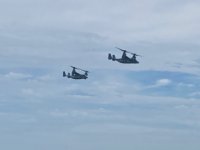 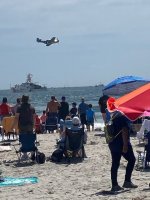 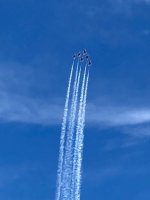 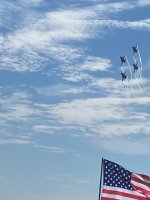 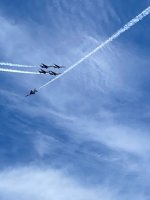 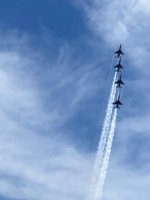 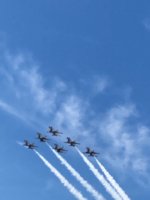 Lee said:
The Thunderbirds precision was impressive but the star of the show was the Raptor – it turns on a dime or can just hover in place.
Click to expand...

I worked at an airshow several years ago, and they had a pair of Raptors on the tarmac behind us.The Thunderbirds were on hiatus that year and the Raptors were the star of the show. One of them approached just under Mach with the condensation cone forming on his nose, stopped in midair, then turned around and left. My jaw dropped. If you were on the receiving end of their payload, you'd be dead before you even knew they were coming. It was an impressive display.

Later in the evening, when I had a chance to grab dinner and actually walk through the crowd, I overheard several people complaining that the Raptors were "lame" because they just hovered there and did turns. Sure, these pilots weren't doing loops and dives or scratching paint in a tight formation, but I don't think people understood or appreciated what those machines were doing.

The F-32 "Lightning II" has that capability with its turn-down jet and forward fan but the F-22 lacks both of those features.
L

I didn't know the AC air show was last weekend..

Where does the ignitor go again?

The F-35 "Lightning II" has that capability with its turn-down jet and forward fan but the F-22 lacks both of those features.
Click to expand...