Danh said:
No , 4” tube will not work according to the original the max tube size is 3”.

Here is the original listing:

There is a piece of 4” tube on the side for scale of this jig. I suppose it would be possible with some creativity .but that is not what this unit was designed for.

Dan, are those supposed to be different documents? They appear to have the same content to me.

I am still using the replica Rose Jig you made that I got from you at NARAM-61 on every build I can.

Oh....and in case anyone cares, the mandrels from the original Rose jig that I purchased from Geoffrey Kerbal's estate are usable on the updated version that Dan makes (made?). So in the end, I didn't need him to make me a 24mm mandrel since I had one from the stuff I got with Geoff's jig. That mandrel got used to help put fins on a Vagabond (the BT-60 one) just the other day.

I just hope at least one of my kids appreciates this fantastic tool well enough to either take and use it or find it a proper home after I die....

Here' a picture of using it with the 24mm mandrel putting fins on my Estes Tazz. 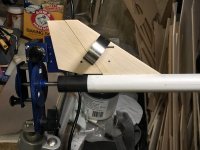 Thank you, Dan! I greatly appreciate it!

When I built my first CNC router, I made a 'universal' 3-fin template alignment-thinggy that was 100%. . . meh. It was fairly accurate and somewhat functional, but quite fiddly, so somewhat pointless. The 'universal' aspect was that it could do tubes from about 1" to about 4" with fins that were exactly 3/16" in a 120 deg alignment, +/- probably about 0.010" at the fin tip, so decently accurate. Oh yeah, the max circumscribing circle, including the fin span was about 8". So it was completely 'universal' for what I was flying at the time and about 1% universal for what people on the forum do. . . maybe 0.5%. . .

When I bought my laser, I started making purpose built jigs for whatever configuration I was building at the time. Measure the tube, measure the fin, update the CAD file and run the part. They seem to be pretty darn accurate. Super easy to use and minimal set-up (as long as you ignore CAD time, laser time and all other non-recurring time wasted making one. . . ).

I think the initial intent of the jig was to do FAI competition models, I imagine it was 150% the right solution to that problem and imagine a bunch of winning models used it. I think the design is very cool.

I might buy a nice/precise version of the Art Rose Jig from brass, bronze, etc., in a steampunk feel just to support someone who tooled up to produce one. I wouldn't buy a 3D printed one most likely, as the art in this jig seems right in metal, but not plastic. The joy in using this jig (for me) would be to touch the metal, watch the function, measure with an indicator to prove it was just as good as it said it was and then. . . oh yeah, attach a fin. . .pretty similar to listening to vinyl with Class-A amplifiers. If it makes you happy, you'll be happy. If you're more of a high-res streaming with Class-D amp person, that's cool too, but the vinyl/class-a setup wouldn't make you happy. All good.

kkooch said:
For record, I have an Art Rose Fin Jig for sale (even signed by Art) with 10mm, 13mm and 24mm motor spindles. In perfect condition. $400 + shipping.

kkooch said:
For record, I have an Art Rose Fin Jig for sale (even signed by Art) with 10mm, 13mm and 24mm motor spindles. In perfect condition. $400 + shipping.

May be a work of art but for low power kits to get the fins on correctly.... I'de rather have more collectible kits in my collection worth that much $ than a piece of art that is easily done with lesser jigs or even an eyeball

To each his own. Estes Apache-2 from 1983 underway. Picture taken a few minutes ago.

Mine looks like yours except it doesn't have the black nob on the top of the fin support flange.
K

BEC said:
To each his own. Estes Apache-2 from 1983 underway. Picture taken a few minutes ago.
Click to expand...

Nice! What is the silver ring holding things together?

kkooch said:
Nice! What is the silver ring holding things together?
Click to expand...

It's a clamp I've had for many years....the vendor is long gone. In a discussion about the Harrison/Rose fin jig on YORF where I posted this a year ago last April, someone suggested they are constant force springs and that they can currently be had from McMaster-Carr. I looked, that it seems plausible... 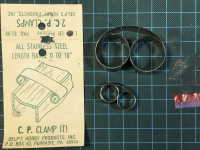