Saw the BT80 printable Saturn V on thingiverse, and wanted to give it a shot. I tried the camera remix, but unfortunately the camera software that you need to run at least once to turn on writing to an SD card is either in chinese, or last updated in 2014. So I had to scratch the camera part. Hopefully some lessons here will help someone else.

My kids are interested in rockets, so they've built a few estes kits. I wanted to have a bit more fun. Hadn't built a rocket in over 20 years. Was trying to build this as quickly and cheaply as possible, knowing full well it could lawn dart.

I believe ABS is pretty light relative to other standard filaments, but this rocket is still insanely heavy. Printed it in white to minimize paint. I did a standard print with I believe 20% infill. If I had to do it again, I would experiment with vase mode and even thinner walls. I stupidly glued the motor block for a D engine, should have set it up for an E and used the D with an adaptor or something. I was at 13oz pre-launch, right at the top of the limit of a D12-3.

I printed centering rings with ABS. Seemed to hold up fine, it was a risk but I was trying to save time and money. Standard teflon loop around the bottom retaining ring and through the top one. Didn't get a pic, but used a 24" chute. 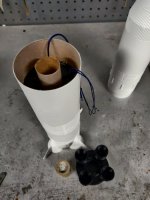 Printed the engines with a retainer built in. I think it was a good idea, unfortunately the rocket was so heavy that I was concerned about stability and left it off at launch. Just used the nut, no engines. 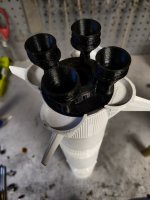 No idea what happened, but my engine mount ended up too deep in the rocket. Luckily the retainer could move a bit. 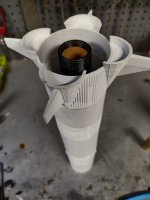 Printing the engines with ABS, which doesn't do overhangs well requiring supports took a long time.

Pictures of previously mentioned camera. Honestly as heavy as this rocket has to be to fly, I'll look for a new host if I ever figure out the software. 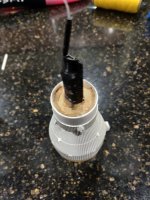 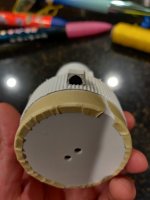 Painting it was a challenge. Again the goal was reasonably quick, and cheap. I didn't want to put a ton of effort into something that would bury itself in a field, so no decals. It looks good from about 10 feet away. I spent some time trying to learn the orientation of the black lines. Also managed to knock the tower off, glued it back on for a launch. 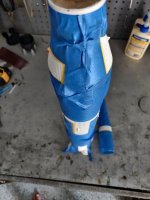 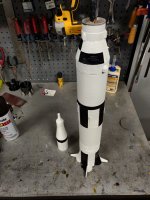 Flew surprisingly well. I was surprised. Broke yet more of the escape tower hitting the ground, but that's to be expected with an almost 3oz nose cone.

Looks great. I used a sharpie on my little Saturn V's. One is a 13mmt.