Altimeter Recommendation for a Pyramid-Shaped Rocket

Just doing my due diligence on this. I've been told that, since I'll have a sampling port hole on only one side of this pyramid-shaped rocket (the altimeter will be enclosed in an airtight box- save for the sampling port- attached inside the skin and containing an access panel on one side of the rocket), it is possible that crosswinds on the pad could "spoof" a baro altimeter. Any recommendation for a specific altimeter that wouldn't be susceptible to this issue? The rocket is still open- no fiberglass skin attached yet- so I'm open to any suggestions. But I do know that I don't want to make the entire interior of the rocket into an av bay.

My plan is to have the altimeter fire the drogue charge/ piston-eject the drogue chute & secured main chute at apogee, and the Jolly Logic Chute Release will deploy the main chute. 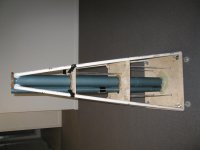 Tube from the back or side of the sampling box to a different surface?

Any barometric altimeter can only react to the pressure information given to it. All pressure signals are subject to Bernoulli so cross gusts will always lower the pressure on a single port. Having multiple ports lets the signal average. That said, when you reach apogee you should be able to get a good reading on altitude if you have a recording altimeter.

Using an accelerometer based altimeter for altitude, you re not subject to the barometric issues. However, any non-vertical portions of the flight are going to show up incorrectly with a single accelerometer board. You'd probably need a board with a 3 axis accelerometer and gyros to get a halfway decent altitude without a barometric reading.

Maybe something like a Raven 3 would give you enough data to get a good understanding of your flights.

Are you looking at controlling ejections with it or just recording altitude?
Last edited: Nov 13, 2016

In my experience and opinion a single port has never given me problems in several rockets I have flown but several are always a good design practice.

You would need quite a gust to get a baro reading past the altitude trigger for most altimeters. This doesn't look like a rocket you will be flying in windy gusty conditions anyways. In those average conditions (winds 10mph or less on the ground) a single port should be fine.

That is sooo cool! Almost went to work on the real project-kinda glad I didn't, except i coulda worked with Pete Conrad (Delta Clipper) on it-dang! Really like your concept-good luck!
Last edited: Nov 13, 2016

The last time a Nation Sport Launch was held in New Mexico, we got an inside tour of a storage/referb facility. There were V1 buz bombs , Redstone parts and many other very interesting items, including the charred remains of the Delta Clipper.

The cover of the av box will be in line with the surface of the pyramid rocket. So the sampling port will be directly in the airstream as the rocket ascends. I found a blue plastic electrical box with cover at a big box home store, and I'm sure I can make it into an airtight av bay.

The altimeter is specifically for the drogue deployment. Any altitude reading I get will be fun, but not critical.

Now I just have to decide how to get the drogue charge/ wire down the central tube and under the piston (or a wire through the central tube to the charge). I have a couple of ideas- any ideas you have would be welcome.

Would have been a DREAM to work on the real Delta Clipper project. Hope my flight doesn't leave me gazing at the remains of my model!

Since I would imagine that this thing isn't going anywhere near Mach, and if you're only concerned about getting a decent deployment at apogee, one decent hole perpendicular to the airstream will be fine. You might get a bit more pressure noise in your time-alt graph, but if you either don't care about that or it's not a factor at all then it won't matter.

Find small tubing and a cross fitting and plumb it from the other 3 sides to your altimeter box if your worried about it.

I was thinking about using a timer as a backup to the altimeter- with a separate deploy charge.

have you thought about using a magnetic apogee detector like "zeptobit" [the web site is down for a couple more days] it uses the Earths magnetic field to detect orientation, and can also be used as a timer.
I have both a rocket with a zeptobit and a couple of rockets with only a single sampling port and everything works well.

423yjl said:
have you thought about using a magnetic apogee detector like "zeptobit" [the web site is down for a couple more days] it uses the Earths magnetic field to detect orientation, and can also be used as a timer.
I have both a rocket with a zeptobit and a couple of rockets with only a single sampling port and everything works well.
Click to expand...

You stole my fire as I was going to suggest that. The only thing that would be unknown to me would be the presence of the metal all-thread and perhaps someone
more knowledgeable could comment. I have a zeptobit but haven't flown it yet. I've used the old Galejs MAD unit from Aerocon for 14 flights but it I believe is out of production.
The zeptobit has a lot of safeguards to prevent an accident whereas strict discipline was needed with the Galjs MAD. If the Galejs was turned on with a live charge and say one changes one's mind to launch, they had to make darned sure the unit was turned off (and I removed one leg of the ematch charge from the bulkhead terminals) before tipping the rocket over off the rail.

It would be easy to test in the above rocket by installing a unit and tipping it over. If an LED were attached to the terminals say of a Galejs unit it will give an indication of the ejection angle. The zeptobit I believe has a G switch and will activate the channels (there are two a primary and a backup) when the rocket starts
a flight and there is an onboard LED that will light whenever the unit is tipped over in flight or not in flight. If the G switch has not detected acceleration, the deployment LED will still light up to indicate the angle the charge will fire but no power will go to the ematch terminals. Bottom line is the device arms itself in flight which is a nice safety feature. I tested it with live ematches and simply tipping it over it didn't fire. The indicator LED still lit up indicating the angle the rocket needs to be to fire if armed.

The other thing to remember with the Jolly Logic chute release, since the main chute isn't snapping open at apogee, one has a little more
leeway when the apogee deployment of the package occurs. If the event is a bit early or late the reefed chute would be less likely to cause a
zipper. Kurt

Thanks again fellas. These are great recommendations.

I double-checked my 78" Top Flight Crossfire main chute with Chute Release attached, and it fits nicely in the 3" Blue Tube, and the package is only about 12" long. With piston ejection, it should leave the tube nicely.

ksaves2 said:
You stole my fire as I was going to suggest that. The only thing that would be unknown to me would be the presence of the metal all-thread and perhaps someone more knowledgeable could comment.
Click to expand...

I'm only slightly more knowledgeable. 316 stainless is non-magnetic if you can find it, or you could always use aluminum. Or bronze, but that's just gilding the lily.

I used an ARTS1 and a MARSA54 (I used this for the airstarts) for deployment of chute in my long tetrahedron and it worked well.
These units used the accelerometer based deployment. Next time I will set the MARSA54 and ARTS1 (main chute output) for timer backup also since I know now how long to apogee. Good luck!

I used an ARTS1 and a MARSA54 (I used this for the airstarts) for deployment of chute in my long tetrahedron and it worked well.
These units used the accelerometer based deployment. Next time I will set the MARSA54 and ARTS1 (main chute output) for timer backup also since I know now how long to apogee. Good luck!

Now, here's a guy with some serious pyramid experience. Or tetrahedron experience. John, where is the cg on this one relative to its length?

I'm curious as to the CG as well. I'd also like to know the weight of your rocket. What an impressive flight!!

rstaff3 said:
Now, here's a guy with some serious pyramid experience. Or tetrahedron experience. John, where is the cg on this one relative to its length?
Click to expand...

The Tetrahedron is about 5' 10" (a little taller than me) and weighed in about 48 lbs with all motors. I probably had at least 10 lbs of weight in the nose.
The CG with the motors is about 55% of length from bottom so about 39" from bottom (measured on one side, the vertical length would be any side multiplied by cosine of angle from vertical).
I think you can approximate the CP of the tetrahedon or pyramid with a cone (which has CP 1/3 from bottom) so CG at 1/2 way should be ok.
I had a half size prototype of this tetrahedron many years ago that balanced only 50% from apex and it flew stable with all four motors (a J420 air starting three H180W).
It met its demise due to insufficient heat protection at the rear. The big one has a layer of Cotronics ceramic paste in the rear rated at 2000 degrees and then aluminum tape on top,
It kept the fire at bay. In the video you can see that after the M burns out, the J's airstarts and it spins/wobbles. I am not sure if all three lit at the same time or the
tetrahedron acted like a pendulum with all that weight in the nose. I may set the airstarts one second earlier next time.
Then of course I used to fly the shorter (equal sided) tetrahedrons back in the days as well...

Here is a fellow who was able to design and fly another famous triangular shaped object :

Thanks for all the info, John!

Mine will weight about 25 pounds, and will have about 8 pounds of that weight in the top 12" of the rocket. Rocket is 52" long.

I've already underestimated the power necessary to launch it successfully, so I'm blowing up the bottom 12" length of the rocket to substitute a 75mm motor mount for the 54mm MM I started with. Just a single K1000 motor for me. Mobius camcorder mounted on the surface looking down. Drogue and main chutes out the top of the rocket. Jolly Logic Chute Release for the main chute.