An ASP 29mm Aerobee 100 JR that I finished recently. Airframe is very very slightly tweaked from the kit, only visible change being that the conduits are cut differently. Graphics are all custom. "SPACECRAFT" is a made-up space company I've used on a couple models, a weak joke on the ultra generic names of many actual space companies. The other graphics are toward the premise that this rocket's mission has been sponsored by a number of much more famous companies.


Hit a quarter mile on an F motor in its first three launches on Saturday and came back to land within 100ft of the launch pad each time. That's much lower than ASP's published apogee estimates, but it's carrying extra weight and the finishing certainly isn't perfectly smooth. The paint and vinyl graphics aren't too bad weight-wise, it came in about 9oz with the published target being 9.6oz. But in these flights it was also carrying an altimeter, chute release, and buzzer. Jolly Logic chute release just barely fits smoothly in the 1.9" tube with an 18" parachute if you fold the latter long and just thick enough to put tension on the band, and worked fantastically.

Waiting for the corn to get harvested at PARA520's usual launch site to try it with a G. 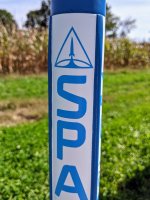 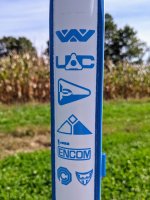 Have flown this model on G78s and G79s several times now. Great flights all. Notably, our last two section launches had no wind and the altitudes hit were spot on the estimates from the instructions: 3200ft on G78, 3040 on G79. At a prior launch in serious wind it did 2500 on a G78. So I think just basic, everyday wind explains the discrepancies I'd been seeing from ASP's projected apogees.

This launch video is kind of neat in that you can really see the pressure build up and release.