Before adding a programming port to the BlackAero V3 Pro case, weigh the benefits of being able to program a transmitter without opening the case against the detriment of losing the Bluetooth interface because you CANNOT have both features without also adding a 4PDT switch.

The first step was to identify where the connector would fit the best, and it looked as though just below the molex charging connector was about the only location that would not be in the way of another component or wiring; the design of the BlackAero V3 Pro case doesn't waste much space. A hole for the programming port was cut, with the side of the connector flat against the bottom of the inside of the case.

​
After that, the outer connector shell was glued in place, and the male and female connectors were inserted just enough to ensure that no internal obstructions had been created while gluing the shell to the case.

For those of you working with this case, specifically with the molex and other connectors shown here, a proper crimping tool is a necessity. Before I purchased a crimping tool, I spent more than an hour trying to assemble that molex connector, even resorting to soldering the wire to make it more streamline. And, even then, I felt like I was having to force the pins in so hard that I thought they might fail. After much trial and error, I can tell you that is not how the pins are supposed to fit. With the proper crimping tool, the pins slide in with very little pressure and click in place. You can even push and pull a pin that has been seated in the connector just a little, very easily. And, the strands are not coming out of a properly crimped pin.

Once the programming harness is completed and the male end is inserted into the connector shell, assemble the rest of the case according to the instructions.

​
Assembly complete. Like I said, not much excess space. Then back into the storage case. 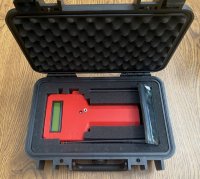 ​
I do need to find a Lego lens to cover the LED light.