I was really bored yesterday, and as they say, idle hands....so I started looking back through old catalogs for inspiration, lo and behold I saw the Astron Space Plane. I know several people have done upscales with more or less success, so I thought I'd try my techniques on it. I know George Gassaway did a sort of 4x upscale for G12 motors back in the day, but for regular flying I like the 24mm E-6 motors as more economical and I have plenty of big H powered upscales already.

It's about 3x upscale, which is a swag based on just looking at the original photos, and the main body tube length, nothing else. The PS-II nose cone I had was much longer than the original so I shortened the body tube to compensate to keep overall length and CG requirements as needed. It turns out I later found the dimensions in my 1971 catalog a length of 10" and a wingspan of 9", mine is 27" long and 28.5" wingspan, so pretty close, the body tube is 2" which is about 2.6x but looks good enough.

I started with an 11.75" root chord with slight taper and angled the wing tips in slightly to avoid the tendency for the big wing tips to oscillate or flutter, it also adds some drag stability like a shuttlecock. I just eyeballed the shapes. For the wing I went with 9mm depron since I needed stiffness with the wingtips to avoid flex and put 3mm carbon rods 1" back from each wing tip and a cross spar right behind these, grooved and glued in place and taped over with blenderm medical tape. I then used 3m-77 spray adhesive to glue 3mm panels over the spars on the bottom to add more stiffness and allow a more than normal(for me) rounded airfoil shape. I went with 1.25" wide full span elevons which looked about right. I did not use any dihedral because the wing is stronger that way and honestly it doesn't need it when you have active control.

The wing tips are 9mm depron with rounded edges, and they are slotted to slide over a tab in the wing tip to lock them in place, the 3mm laminations stop just before the tabs so they help locate the tips. All was glued together and I did some indoor test glides.

It took me about three and a half hours to design it, do some simulations in open rocket for mass balancing and equipment placement and put everything together and install the radio so very quick build.

My original max rearward CG after glide tests turned out to be too tail heavy and I had to move the cg forward which worked out perfect as I could put the receiver just inside the end of the body tube with velcro and battery up into the nose with no servo extensions needed to save weight. I did some early morning flight tests to confirm CG and then progressively tone down the roll and pitch throws to where I liked them and to tweak the boost and glide settings. The model doesn't seem to wander in roll and stays level, maybe the angled in wing tips help this.

The model flies really well with glide times between 1:40 to 1:45, pretty decent for a mostly flat plate model at 10.25 oz rtf. I took her home and scrounged through my decal remnants and found some from an upscale interceptor and some red vinyl for trim, turned out fairly pretty. I then went back to the field and got some flight video. I never built one as a kid but I'm glad I came back to this. 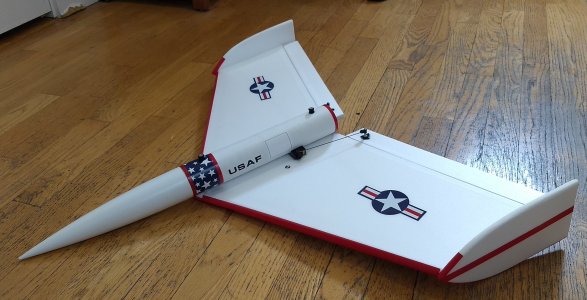 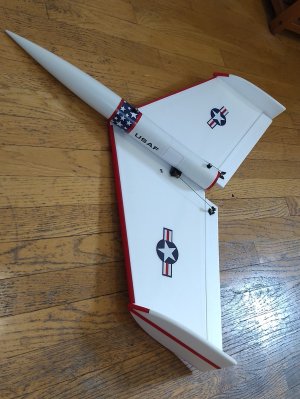 Really nice build and flight...I built the original as a kid in the 60's - it went straight up and came straight down, lawn darting into a freshly plowed field about 10 yards from me. No damage, but I never flew it again. A somewhat upscaled version (but not R/C} is on my bucket list returning to the hobby. 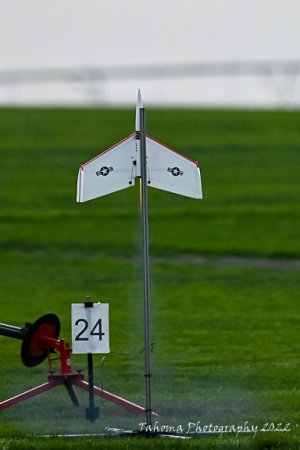 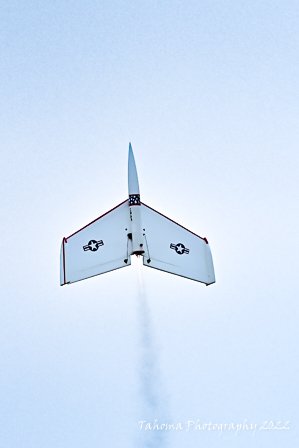 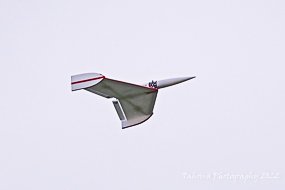 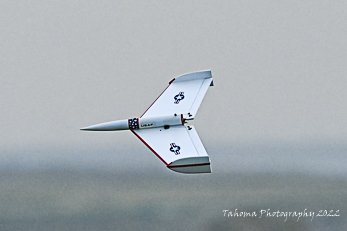 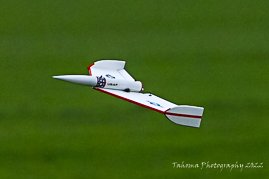 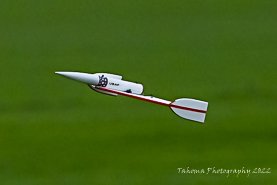 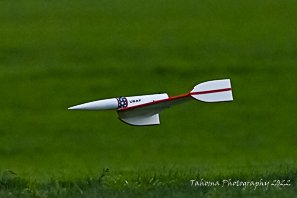