This is a fairly significant update to the FAG posted earlier in this thread. It includes the following updates:
As before, this is an OpenSCAD Customizer implementation. After configuring your Fin Guide, Press F6 to render it (may take a while), then pressing F7 will export it to an .stl file for 3D printing. 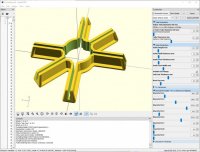 Usage is pretty much self-explanatory, and the best way to figure it out is just to play around with the slider controls a bit. See the blurb below, if you haven't used the Customizer before.

Changes in operation from the previous FAG are as follows:
In the example pictured above, four fins of 2.1 mm thickness have been positioned at 0, 90, 180, and 270 degrees, and two smaller fins of 1.6 mm thickness are positioned at 45 and 225 degrees. How cool is that?

The attached 'Fin Guide2.TXT' file needs to be renamed to 'Fin Guide2.scad' to use it with OpenSCAD.

3. In the OpenSCAD [Edit] menu, select [Preferences] then open tab [Features], check
[Customizer], then close the window when the check is shown.

4. In the OpenSCAD [View] menu, uncheck the option [Hide Customizer]. The Customizer
window should open at the right side of the screen.

5. At the top of the Customizer window, check 'Automatic Preview' and select 'Show Details'
in the dropdown box.

6. If you are comfortable with the instructions above, then also in the [View] menu, you can
check the option [Hide editor], which will allow the full screen to view the model. You
can also check to [Hide Console].

I 3D printed this yesterday. The idea was to align the motor tube to the body tube axially as well as vertically, in conjunction with a Guillotine Fin Jig, while I tacked them to the body tube. Per one of John Coker's videos the aft centering ring was left off to facilitate epoxing the fin to the motor tube and inside of the body tube. If nothing else it gave me peace of mind to know that the fins were locked down on all three axis'.

The large end could be smaller but it makes it easier to remove. It's for a LOC IV. I printed one for the LOC Graduator too.

FWIW there is a new 2021 version of OpenSCAD available. It looks like the most significant changes are to the embedded code editor, perhaps enough that I'll start using it rather than an external editor. Autocomplete, Calltips, Code Snippets, and Tabbed Windows will be nice, and the Jump-to-Code could be an excellent help. I don't know yet if the new version changes the use of any of my tools - please let me know if problems show up.

Gary I'm still collecting GH Stine publications and adding them to your listing.

You say it there, it comes out here...

A printed drill guide can be a simple thing to do a one-off, but doing it as a configurable item, I had to add some whistles and bells. The drill guide presented here as an OpenSCAD Customizer item incorporates the following features:

2. Tube size selectable from a menu of standard tube sizes (with a factor for fine adjustment).

3. Adjustable length and diameter of the guide body.

4. Drill size selectable from a menu of fractional-inch drills in 1/32 inch increments. While printed holes (especially small ones) are often undersized, there is no provision for adjusting the size, 'cause hey, you're going to run a drill through them anyway. Right?

5. At each radial position, up to three drills can be placed in a longitudinal line, independently positionable on the guide.

6. Optional, adjustable size slots that can be used, for example, with a piece of aluminum angle to align multiple guides on a tube.

7. Optional, adjustable size flange that should be useful to tape or clamp the guide to the tube.

8. Optional slots in the tape flange that can be used to visually align the guide to a mark(s) on the tube.


Usage is pretty much self-explanatory, and the best way to figure it out is just to play around with the slider controls a bit. See the blurb in the source code header (or earlier in this thread) for details on how to set-up the OpenSCAD Customizer.

Note that the attached .txt file needs to be renamed to the extension .scad to be opened by OpenSCAD.

I had some issues using the drill guide generator this weekend. I tried to print a 3.1" diameter guide with three 3/16" holes and the generator just produced a sphere. Am I missing something?

Regardless, it's not that big of a deal. I was excited about using this component generator, but I just whipped something up in Tinkercad that did the trick.

vcp said:
It looks like it's too late to delete the above standoff posts, but the following replaces them. Everything that they did is incorporated into this one. As before, read the instructions in earlier posts on how to use the OpenSCAD Customizer, and, the attached file must be changed from the extension .TXT to .SCAD (scad file uploads aren't allowed here). Once you get past that, easy to use;

This one adds a variable slanted aft deck, base extension to the tube, elliptical fore-aft base extension, and a rail button recess; all configurable of course.

As before, read the instructions in earlier posts on how to use the OpenSCAD Customizer, and, the attached file must be changed from the extension .TXT to .SCAD (scad file uploads aren't allowed here). Once you get past that, easy to use;

The Rail Button Standoff is defined by:

I'd like to use this for one of my upcoming projects, but 54mm tubing isn't an option for the tube size. I would suggest just making that a completely user defined field, or at least make it an option.