This past weekend my high school flew our 75mm MD rocket for the first time to an altitude of 30,197ft.

The rocket is 72" tall and weighs 6lbs empty and weighed 22pounds at lift-off.

Only 4 members of our team were able to make it this weekend to the launch, but our second launch will be on May 5th where we plan on flying an M2020Imax motor to above 40,000ft. 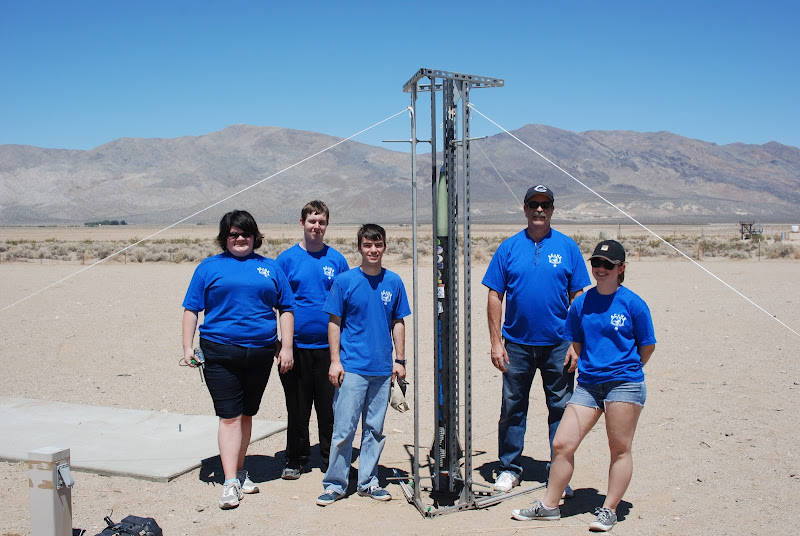 Our team is ready to go before launch, 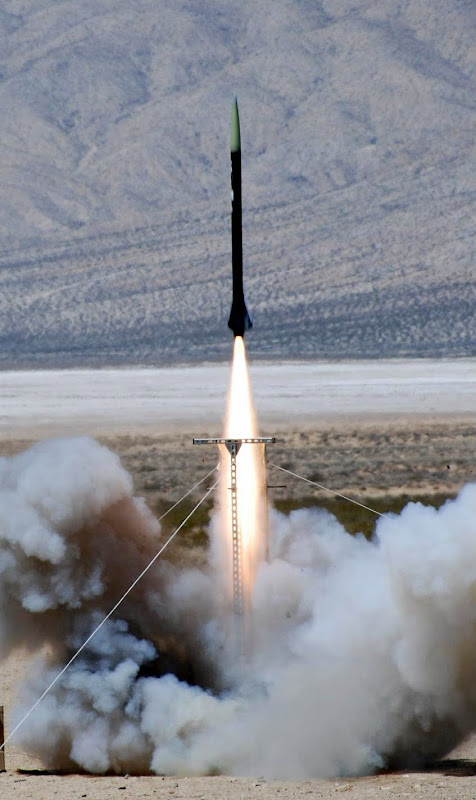 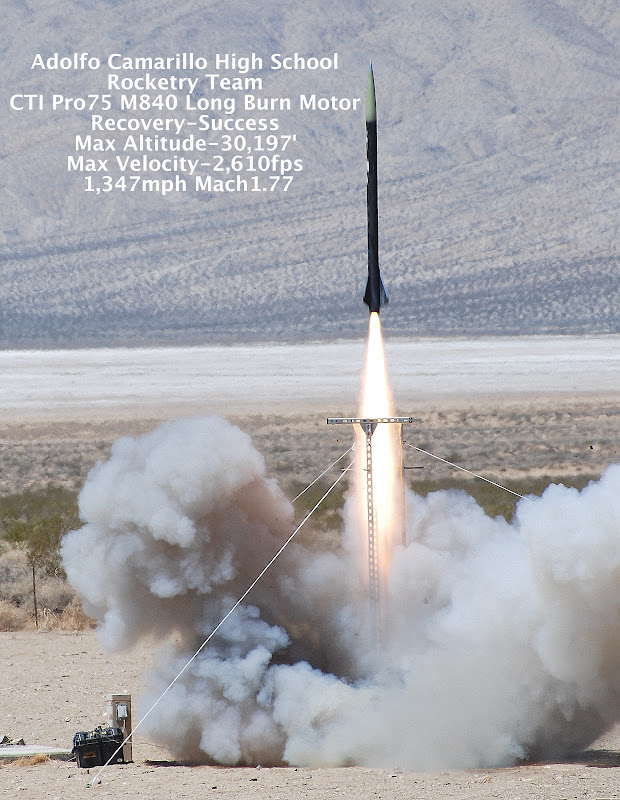 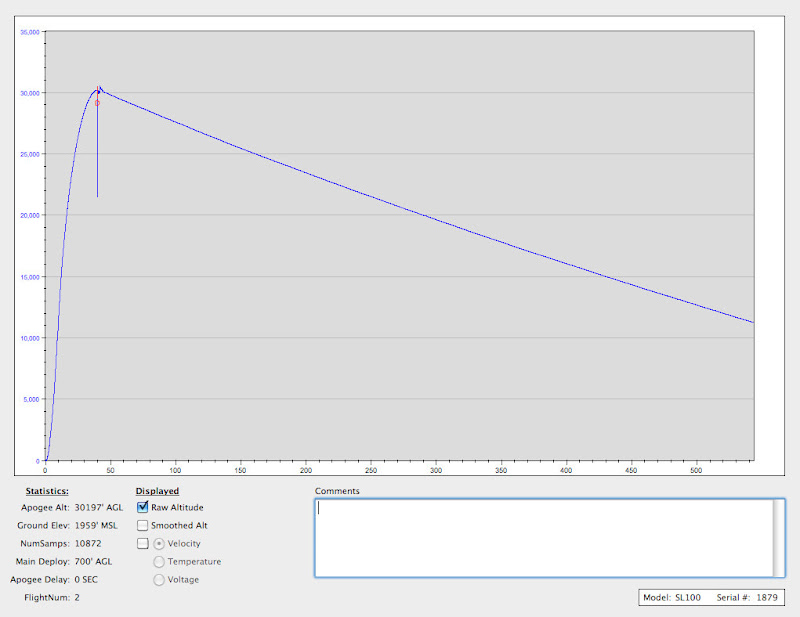 Altitude data from the Stratologger

Very cool, hoping to do something similar at LDRS with WPI, only flying to 10k though with a K250W. This gives me a lot of inspiration knowing that a school group can make things like this happen still.

Yes. These projects are possible. Always keep your eyes on the prize and do everything step by step.

This project was put together very quick, and I feel hypocritical for saying it.

This project though could NEVER had been possible without the vendors, organizations, and individuals that donated time, money, and knowledge toward this project.

In no particular order:

Stickershock23.com-Mark thank you for the amazing decals and quick delivery. They even stayed on for the first flight! (will they be any match for Mach 2.5?)

Featherweight Altimeter: Adrian thank you for your generous support and for our wonderful product.

Kiwanis International: Thank you for your monetary donation.

Tinder Rocketry: thank you Cameron for your enthusiasm toward our project and fantastic Tender Descender product.

Pleasant Valley Lions Club: Thank you very much for the Incredible donation to our team all three years and to the other local club that you benefit. It is a club like yours that makes and inspires the students of our community.

Rousetech: Tom thank you for your support and for the time dealing with our school system and for our questions. Everything recovered perfectly, and without your product it would not be possible.

Wildman Rocketry: Tim and Jackie, what rocketry saints. Thank you both so much for all the time spent on the phone and returning emails about when the boxes were coming. The work and drive that you guys have for rocketry is so clear. Keep it up! Thanks again.

Jared Shapiro: Dude, what can I say. Absolutely amazing job on machining the fins, all you time and effort was well worth it and it looks amazing.

Alex Zoghlin: Thanks for working with us on getting us our motor case, it takes that extra effort to make things easy enough for our district to understand thanks.

Justin Nichols: Thanks for selling us the RDAS, it is such a cool device, and who doesn't like free G10, ha?

Dr. Rasnow and Dr. Cauchon: Thank you for being the CSUCI Professor mentors willing to take time out of your busy lives to help out our high school team. Thanks

Jeff and Gary: Thanks to you and the rest of you staff at the NAVSEA center. We enjoyed your talks and knowledge on real missiles and systems.

Mr Rabe: thanks for allowing our team to use your machine shop to work on the rocket when our equipment was inadequate.

Tom Hess: Thanks Tom for getting project started and keeping us focused on getting to the goal.

And to all of those who go unnamed. We thank you.

Great flight! Congratulations on putting together such a cool project, and let us know when you launch this badboy again.

BTW Jim Jarvis pointed out that there is a typo in the stats picture, it should read 1,977fps, not 2,610fps

That is seriously cool, man. I wish we did that kind of stuff when I was in school. We flew some Estes sized rockets in Middle School, but that was about it.

Well we have a busy week coming up for our team.

We got launch and waiver approval this morning from Mark at F.A.R..

Tomorrow we get interviewed by the County Newspaper about our teams huge success.

Tuesday we go to one of our sponsors meeting to thank them in person and discuss our teams success.

(We want to celebrate our success before this weekends flight...)


Then we have to wait to receive our M2020Imax from Wildman hopefully Thursday, possibly Friday.

The real kicker is the max velocity of Mach 2.8, we expect serious dynamic heating.


We are going to need a lot of luck I think, and will need to be on top of our game.

Good luck next weekend. Hopefully you have made arrangements for another launch tower, don't think I'll make it out this time.

We actually made our own that we had last time, but yours was nicer and already setup.

bandman444 said:
This past weekend my high school flew our 75mm MD rocket for the first time to an altitude of 30,197ft.

The rocket is 72" tall and weighs 6lbs empty and weighed 22pounds at lift-off.

Only 4 members of our team were able to make it this weekend to the launch, but our second launch will be on May 5th where we plan on flying an M2020Imax motor to above 40,000ft.

Our team is ready to go before launch,

Altitude data from the Stratologger

Well, now i can make that launch date!

Article written by our local county newspaper. Worth reading through.

That's pretty cool, Bryce. Good for you! Sorry the launch was cancelled, but does this mean the second attempt will be at Lucerne June 8????

But we have been rescheduled for a private launch on May 26th. At the Cantil,CA FAR site.

Anyone is welcome, but let me know. And be fore warned. We are launching only one rocket all day. Very different from a ROC launch.

Is it still a go for this weekend? I see the Squat is still your level three project, hows it coming? 32.000' would have been a impresive rocket for your level 3 cert flight!!

Yep we are all set. Everything loaded and we leave tomorrow at 6am. We want to launch as soon as possible because the forecast calls for peak winds about 17mph.

Should be an excited morning. Luckily we do have blockhouses to jump into if anything goes awry. Let's hope my tower holds together

Yes. We built the motor today. I think I still have gorilla glue on my hands.

Thanks guys for the support. We hope for the best.

Yep its just like honey, somehow it gets everywhere its not really needed or wanted
Last edited: May 26, 2012
N

Good luck on the launch

We got started a little late and had everything ready to go on the pad at 11:30am

After 35minutes of trying to figure out the launch controller, we got a good igniter burn, but no motor ignition.
After pulling the bad igniter out we found that the igniter had slipped into the supplied soda straw which inhibited part of the burn.

Luckily I brought an igniter from a CTI L motor I have, and after ensuring it was at the top of the motor we retreated back to the bunker, and attempted the launch again.


With a 30:1 Thrust to weight ratio it screamed out of the hardly 3ft tall launch tower and into the 20mph winds. Surprisingly the flight was bullet straight.

About 2.85miles away we lost GPS signal, my first thought was that the nose had separated and dived into the ground. One of the reasons I love the Garmin GPS is that if you loose lock for any reason, it will keep your last know point and take you there. So after an hour of hiking we get to the last known point, then we receive lock for a second and about 50m down from where we were was the nosecone and payload tube. Unfortunately I was right, separation... With no booster in sight, we continue search for about 2 hours till the sand, dust, and wind, were getting unbearable.

We head back and are pretty upset not to find any altimeters, or our expensive motor case.

Here are some photos from the launch:

Group picture of the team, with Tom (Tominator2), and Jared (Edwinshap)

We have lift off!

The video taken by Tom is up on youtube, but be warned it does include a nice word by Jared, I think


So I was really upset that we wont get data that shows how high we went, since the altimeters were in the booster, so I did some research after hearing that I may be able to get data from the GPS.

So with some new free ware and a lot of luck, I give you:

Again I'd like to thank the vendors who helped out this team project.

I will be heading out next weekend to go and spend some time searching for the rocket. (I won't let it go that easy) So hopefully we will find the booster.

We did not have a long enough piece of 1/4" kevlar, so we used 1/8", which ended up shearing off on the carbon tube.

edwinshap1 said:
We did not have a long enough piece of 1/4" kevlar, so we used 1/8", which ended up shearing off on the carbon tube.
Click to expand...

Whats the SWL of the 1/8" kevlar you used? Kevlar tape or rope? I may just overbuild but that seems way undersized for a project that size.

AHansom said:
Whats the SWL of the 1/8" kevlar you used? Kevlar tape or rope? I may just overbuild but that seems way undersized for a project that size.
Click to expand...

It was 750pound test. And we have used it on the previous flight. We cut it shorter this time.

It sliced itself on the lip of the body tube.