It has been a while since I built a Low power rocket. I have reached a plateau with High power, so I thought it would be fun to build some new Low Power kits, and see how nice I can make them look.

I saw the re-issue of the Citation Patriot, and it was too cool looking to pass up. The original was before my time as a kid, but when I came back to the hobby in 2010, I found all the old estes catalogs, noticed this rocket, and thought it would be a fun one to build, someday.

Someday has come, so I purchased the re-issue. I like BT-60 sized rockets, but 18MM power just is not quite enough to these designs justice. I think it is more fun to fly them on D engines, and Aerotech 24-40s.

To start this project, I built a 24MM mount out of SEMROC BT50 tubes and rings I had on hand: 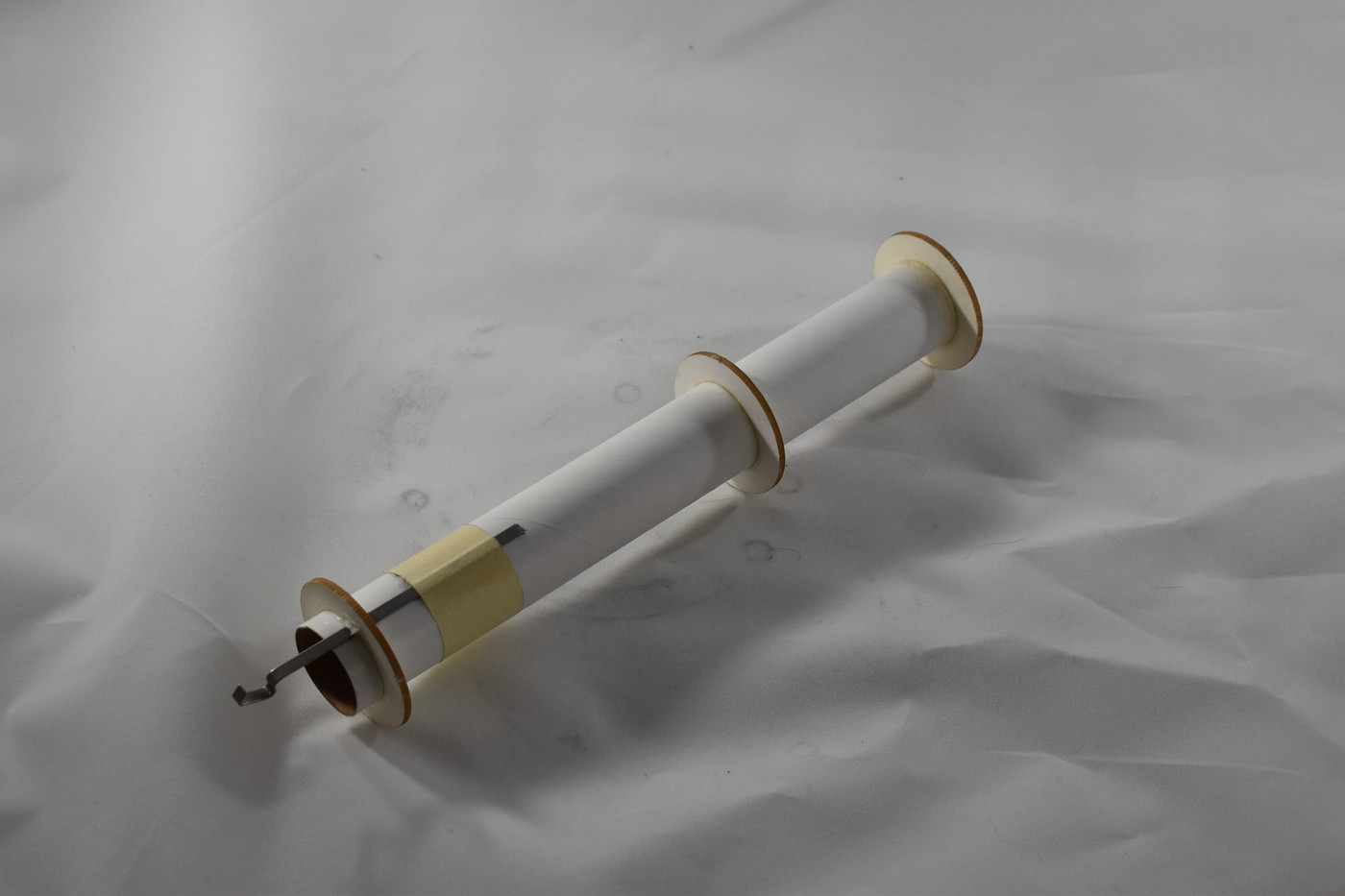 I used the estes engine hook. I decided on a 3rd centering ring because I had a lot of centering rings, and figured it might help it be more solidly held in place. And it looks cool. I also used a bt50 coupler I had as an engine block.

In the mean time, I sanded the seam from the nosecone, and applied primer. I also applied primer to the fins to fill the grain. I used rustoleum filler primer from walmart. I decanted some of the paint from the spray can, and applied it with a badger 250 mini spray gun. This provides a large spray pattern, yet gives more control than a spray can without half the paint becoming overspray. I'm planning on doing the same thing. However, I'll be clipping my engine hook. I'd like to do several of these. I've got an old Citation Patriot (bought off of ebay built), the original 0652 version (shorter red bars, single-piece white nosecone), the new reissue (black single-piece nosecone, screwed-up fin decal), and the eventual corrected version of the reissue.

I have inserted the engine mount, and attached the first fin I like this tool, it does a very good job of keeping one fin straight while the glue sets. I could not find my titebond II around the house, so while I was on my middle of the night walmart run, I picked up a bottle of Gorilla wood glue. Hopefully it is suitable for rockets.

The picture is a little dark, but I did sand the primer, and the lighter application of primer filled in the grain, and since it was not as heavily applied, it required less sanding than usual.

Looking ahead I think I might use Tamiya white pearl as the final color. I also need to find 3/16 launch lugs in my stash of rocket parts.

I got all three fins glued on, and fillets applied. I used titebond trim glue for the fillets One of the fins broke when I was careless during the process of removing from the laser cut sheet. So I glued it back together. I also painted the nose cone with Testors Boyds gloss black. I used my Grex XGi with a .3 needle. I also painted a goblin and Swift 200 nose cone at the same time. The Xgi was fine for the smaller nose cones, but trying to get enough coverage of this larger nose cone, it got away from me, and I got a bit of orange peel on part of the nosecone. Then, I dropped the nose cone in the middle of painting, and tried to paint my way out of a mess, which almost worked, but one side of the nose cone is a little boogered up: 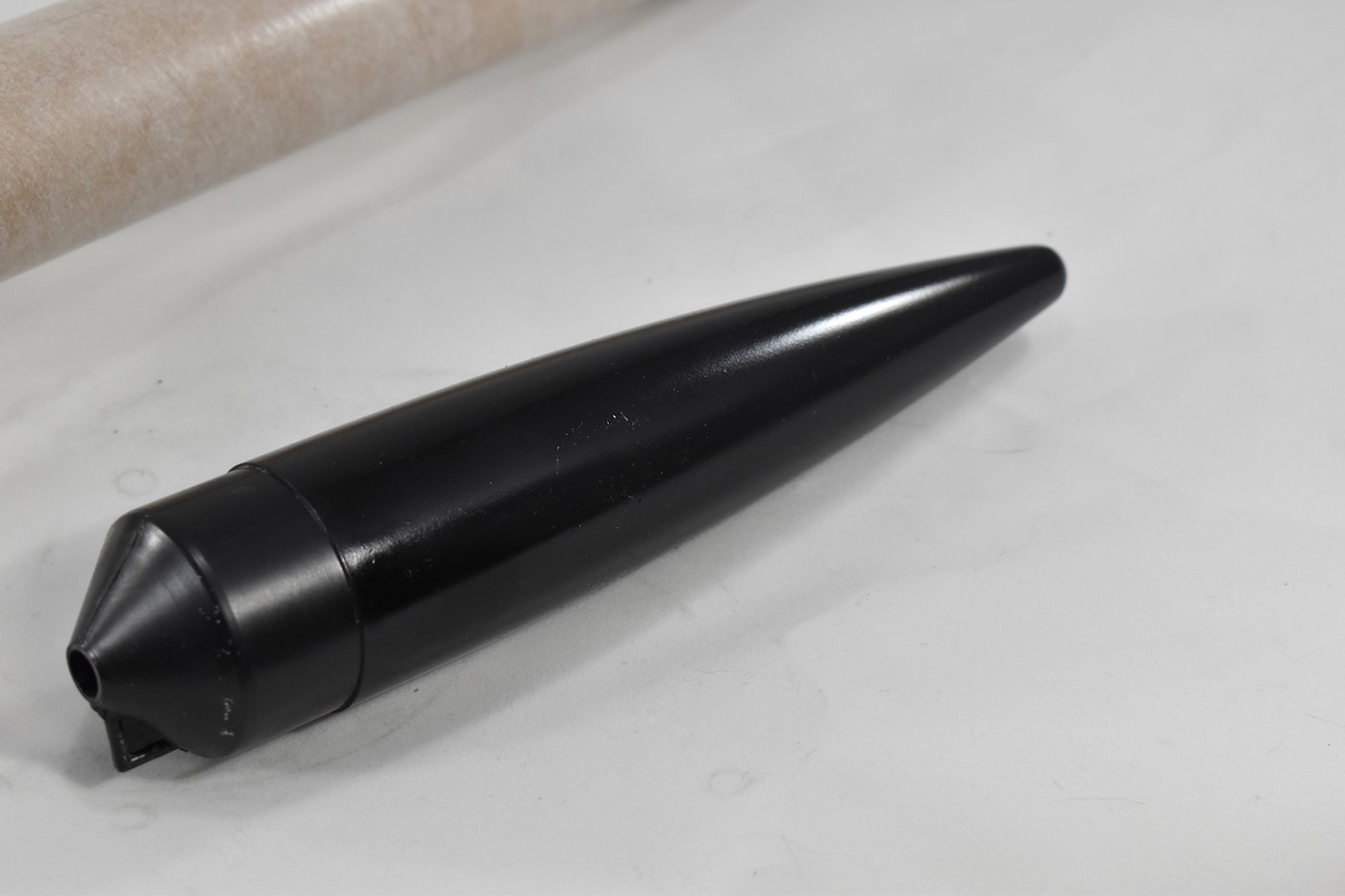 If I were to do it again I would use a larger needle/nozzle setup.

I found my stash of 3/16 launch lugs so I will glue those on soon.

I do have to say I did not much care for the gorilla wood glue. Too thin. I will get another bottle of Titebond, but I am just frustrated I lost a whole bottle of the stuff in my house. Where could it have gone? I guess we may never know.
Last edited: Feb 21, 2018

At least you only misplaced glue, I have misplaced a bright yellow BT70 Goblin!!!!!!

Interesting that you say you like Titebond better. I found the opposite. After trying a bottle, I'm sold on Gorilla. We are all different and that is what make the world a great place.

I tried to get too fancy painting this one. I decanted what I had left of a can of Tamiya Pure white, and used the trusty badger 250 to paint this rocket. A few days later I found 3 cans of Valspar white lacquer in the garage which I forgot I had. I am just concerned it may have gotten funky after being exposed to hot and cold in the garage. I will give them a good shake and a warm water bath before spraying.

They are on the side you can not see in this picture. I used 3/16" launch lugs in the same place specified for the 1/8". I forgot to document the addition of the Launch lugs.

Just wanted to make sure

KurtH said:
They are on the side you can not see in this picture. I used 3/16" launch lugs in the same place specified for the 1/8". I forgot to document the addition of the Launch lugs.
Click to expand...

Typically, people align them with the engine hook. It makes it easier to attach the leads to the igniter without accidentally shorting them out.

Launch lug placement is one place my borderline OCD kicks in - end up putting them opposite the engine hook so everything balances.

Dont usually have any continuity problems but I can see how that could happen.

Looking forward to watching the decal placement since a new CP is on my list for future acquisition...
A

Awesome build! Did you have to put any weight in the nose when switching to 24mm? I just built a citation patriot per instructions but I think a D would be awesome for this rocket. I was surprised with how heavy this rocket seems when I was done building.
B

It flies nice on a D12-5. I bet you'll like it. I didn't get to try mine on the "E" engine as the winds became too strong. It also turned out I had a little technical problem due to my sucky memory but I didn't find that until I got home...

I did finish this one, I realized I never updated this thread.

I did not add nose weight, I think I have flown this one once with a d12-5, it was fine.

The Patriot should have been a 24mm model, from the get-go. It always seemed under-powered on 18mm motors.

Got any pics of the finished rocket ?